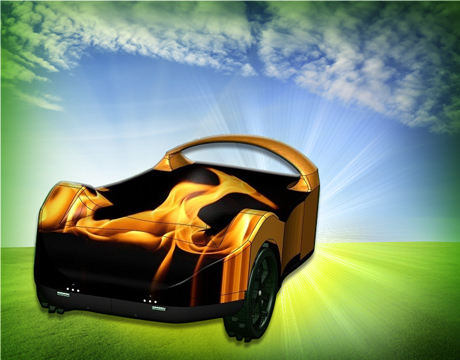 It's June, and with the dawn of summer begins the annual battle of the blades: rejuvenated blades of lush green grass in one corner, freshly sharpened lawn mower blades in the other. Some homeowners love the art and science of lawn care. Others are ok watching the dandelions grow from the comfort of a hammock. Both camps will find something to appreciate in the latest generation of cutting-edge robotic grass cutters.

Autonomous mowers are a great way to show your neighbors your technological sophistication and lawn-keeping savvy at the same time. On the other hand, they free up summer weekends for those who can't or don't want to spend their leisure time pushing a gas-guzzling mower. They're energy-efficient, programmable, and cleaner-cutting than regular combustion-engine mowers. They start, steer, and recharge themselves – and even put themselves away. They have something for everyone, except those (and you know who you are) who really, really like mowing the lawn.

Robotic mowers are the outdoor answer to the popular robotic vacuum cleaners such as the Roomba (iRobot, Bedford, MA). Just as the robovac dashes around the floor sucking up foreign particles, robot mowers crisscross their way around the yard, nibbling away at the grass within an area defined either by an installed perimeter wire or by their own sensations of where and where not to cut.

Although made by nearly a dozen different manufacturers around the world, they look a lot alike (think of a giant beetle) and share many of the same operating principles. They vary by blade design and material, battery type (lead acid, nickel-cadmium, or lithium ion), user programmability, and capabilities for handling slopes, tight turns, and so forth.

Their guidance systems also range in sophistication from GPS-controlled, fully autonomous navigation to the more conventional approach of pre-set mowing patterns executed within a perimeter. Bump and tilt sensors halt the robot when it approaches anything or anybody that should not be cut.

Since their debut a decade ago, robotic mowers have been cutting a swath to the top of the high-end mower market. The robo-mower field is growing like a weed in Europe, with a 30% sales increase last year and steady double-digit growth projected in the next several years, Bloomberg News reports. Customers are most receptive in nations where the window for summer leisure is the shortest, the cost of professional lawn service is the highest, and the economy has been the most resilient. Robots also are tending the greens in growing numbers across Australia and New Zealand. It remains a niche market in the lawn-care-crazy U.S., but early-adopting gear tekkies, green-power aficionados, and people with physical limitations are joining the ranks of fellow American robo-mower owners who have better things to do with their time than cut grass.

Big-name mower makers like Bosch, John Deere, Honda, and Husqvarna – which was first to market with an autonomous mower in 1995 – share the field with robotics-focused specialists including Belrobotics (Wavre, Belgium), Friendly Robotics (Pardesiya, Israel), and Ambrogio Robot (Arezzo, Italy).

Priced anywhere from $1,500 to more than $5,000, robotic mowers are selling mainly to businesses, universities, sports facilities, and other customers with heavy-duty landscaping needs. But innovation and competition are creating more options in the consumer price range. In fact, the market for bots that do dirty or dangerous household jobs like cleaning the pool, scrubbing the floors, and cleaning the gutters is a fast-growing robotics industry bright spot. The International Federation of Robotics projects that sales of home robots could reach $4.8 billion, or 11 million units sold, by 2015.

Cutting to the Chase: Safety

User safety has been an ongoing concern with lawn mowing since the task was first mechanized. In 2010, More than 235,000 adults and 17,000 children in the U.S. were injured by lawn mowers, according to the U.S. Consumer Product Safety Commission. The robotic era has come with its own problems. In 2007, the USCPSC and Kyodo America voluntarily recalled about 530 LawnBott mowers sold between 2006 and 2007 because their cutting blades continued to rotate when the mower was lifted from the ground, creating a risk of a foot getting past the shielding and into their cutting path. LawnBott's manufacturer, Ambrogio, has redesigned the recalled mowers and remains a market leader, but the quest for greater safety is ongoing.

Safety is more than a specification to Michael Letsky, it's a mission. Founder of a robotics firm called RoboLabs (Pompano Beach, FL), Letsky invented his SmartMow robot mower to advance the robotics field while protecting kids like his own from lawn mower injuries. His first SmartMow, invented in 2007, sold about 300 units that year as a lower-priced alternative to the automated mowers then under scrutiny due to the recall. "We validated that there actually was a market. We learned people wanted a mower that is safe to use and highly robust."

"Our state-of-the-art proximity detection technology is like a proximity force field around the mower that stops the blades in a fraction of a second if anything gets too close," he says.

Along with Letsky, SmartMow's three-person team also includes a mechanical engineer and electrical engineer, with support from interns. They have been working continually on system upgrades and are finalizing the next-generation, the SmartMow Racer, in anticipation of an August 2013 release. "It all depends on the electronics we will be testing in June," he says.

Many of the safety features reside in the mower's navigation capabilities, which do not rely on perimeter wire but rather on a slate of high-end guidance gears that learn the lay of the land after an initial walkthrough with the owner. The new model incorporates machine vision to identify obstacles and a compass, accelerometer, GPS, camera, and safety sensor for pinpoint positioning. "It maps the yard and updates the map based on obstacles and cut status."

He believes that all robots are not created equal when it comes to mower safety. As befits an engineer with a 15-year background in robotics and aerospace, Letsky is well-versed in Isaac Asimov's Three Laws of Robotics. He maintains that other automated mowers don't qualify under the first law as true robots because they can cause, or allow, harm to humans.

Whatever you call this new generation of labor-savers, the future is sure to be sunny for any technology promising to relieve homeowners of the summertime chore they most love to hate.

Our state-of-the-art proximity detection technology is like a proximity force field around the mower that stops the blades in a fraction of a second if anything gets too close.Michael Letsky, SmartMow founder