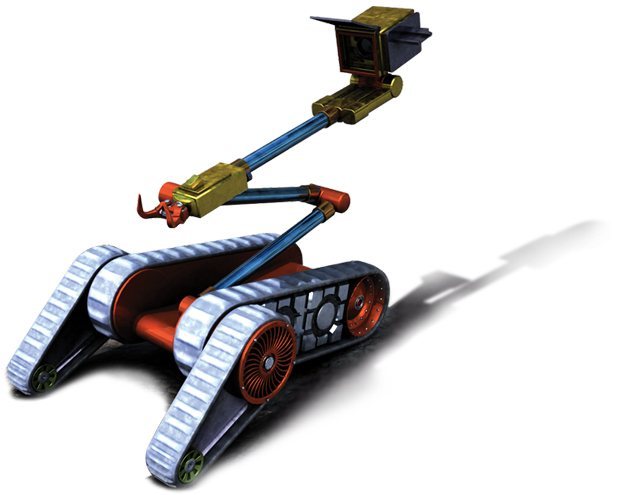 Grunt work: This concept for a military robot would continue the tradition of machines taking on jobs that are dirty or dangerous.

Contemporary robots are used for jobs that are boring, dirty, or dangerous; or for tasks that require more speed, precision, or endurance than a human can provide.

They perform almost all welding, painting, and assembly tasks in the automotive industry and have become a basic element of production in industries ranging from electronics to wood products. According to World Robotics, a 2008 report published by the International Federation of Robotics, the estimated number of industrial robots installed worldwide is more than one million—50% in Asia and Australia, 33% in Europe, and 17% in North America.

An assessment of the international state of robotics R&D published in 2006 by the nonprofit analysis World Technology Evaluation Center (WTEC), found that the U.S. was leading in robot navigation in outdoor environments, robot architectures (the integration of control, structure, and computation), and in applications to space, defense, underwater systems, and some aspects of service and personal robots.

Japan and Korea lead in technology for robot mobility, humanlike robots, and some aspects of service and personal robots (including entertainment). Europe led in mobility for structured environments, including urban transportation. Europe also has significant programs in elder care and home service robotics. Australia led in commercial applications of field robotics, particularly in such areas as cargo handling and mining, as well as in the theory and application of localization and navigation.

The panel also reported that the U.S. lost its preeminence in industrial robotics at the end of the 1980s, and nearly all its robots for welding, painting, and assembly are imported from Japan or Europe.

U.S.R&D efforts on robotics have focused primarily on military and defense-related applications—unmanned aerial, ground, and maritime systems, both surface and undersea. The Department of Defense plans to develop an increasingly sophisticated force of unmanned systems over the next 25 years and expects to integrate them with manned systems.

In 2009, the DOD published the 25-year, unmanned-systems integrated roadmap to 2034. In July 2008, the Robotics Technology Consortium, Inc., was formed with 70 initial organizations, to speed the creation and deployment of ground robotics technology for the DOD and other U.S. government agencies. It has since grown to more than 200 member organizations.

A congressional robotics caucus was formed in 2007 to broaden awareness among members of Congress and policy analysts of key issues facing the U.S. robotics industry. In May 2009, the caucus published A Roadmap for U.S. Robotics: From Internet to Robotics, a targeted R&D roadmap for nonmilitary applications of robotics in manufacturing, in medical and healthcare, in domestic and professional services, and in emerging technologies.

In 2005, the European Robotics Technology Platform was formed to strengthen links between academia and industry, and to develop a research agenda of European robotics. In 2009, the industry group Coordination Action for Robotics in Europe (CARE) also published the Strategic Research Agenda for Robotics.

In Japan, the Ministry of Economy, Trade, and Industry has sponsored robotics activities for a long time. A 2007 national technology roadmap by the Trade Ministry called for one million robots to be installed throughout the country by 2025.

To alleviate a workforce shortage in the country, robots are expected to fill the jobs of 3.5 million people by 2025. The Japanese government also estimates that the nation may save as much as $21 billion on insurance payments in the same year by using robots to monitor the health of elderly people.

In South Korea, a 10-year robotics initiative was launched along with a detailed roadmap to make the country the second-largest provider of robotics in the world, after Japan. Robot Land, a theme park being built near Seoul, is expected to open in 2013. The country’s forecasts include placing a robot in every household by 2020.

The concept of networking everyday objects and appliances in an ambient intelligent environment is not new. But the focus has usually been on the creation, delivery, and sharing of information, and not on the performance of physical tasks.

Autonomous mobile robots may one day perform complex medical procedures, including surgery, on patients in dangerous or remote locations from battlefields to space, with little human guidance. Advances in miniaturization and bionanotechnology could lead to a new generation of nanorobots, which would revolutionize the medical industry. Nanobots may provide treatment at the cellular level, perhaps clearing clogged arteries, repairing genes, battling cancer cells, and delivering drugs.

Cognitive robots can become available as office helpers or as robotic companions for guiding the blind and assisting the elderly. General-purpose anthropomorphic robots, with human-like hands, can be used in transforming manufacturing from resource-intensive to knowledge-intensive, and creating totally unmanned factories. Agricultural robotic scouts may roam the fields of the future to care for the plants, use sensors to provide detailed real-time information about the status of the crop, and apply data fusion techniques for making management decisions.

[Adapted from “Moving on Their Own” by Ahmed K. Noor, for Mechanical Engineering, November 2008.]

U.S. research and development efforts on robotics have focused primarily on military and defense-related applications—unmanned aerial, ground, and maritime systems, both surface and undersea.