When the demand is there, robotics moves at a dizzyingly fast pace. Case in point: ASME’s Robotics for Inspection & Maintenance Forum, held September 24-25 at Texas A&M’s Disaster City facility.

This is the Forum’s second year. Last year’s event focused on inspection robots, crawlers to scan storage tanks, and drones to fly over plants and pipelines.

This year, the event showcased several robots that could perform such tasks as cleaning, coating, and even welding.

Both types of robots have captured the industry’s attention, which spends more than $40 billion on inspection and considerably more on maintenance. Robotic inspection can provide competitive benefits.

That starts with the cost. A robot that crawls around a storage tank looking for corrosion and cracks saves the time and expense of building scaffolds for human workers. It also reduces the likelihood of falls or suffocation when workers enter an improperly vented tank.

Robots can go back to the same point, year after year, to take the same exact measurement. By analyzing this data, companies can do a better job predicting when each unit will need maintenance.

You May Also Like: Are Hydraulics the Future of Heavy-Lift Drones?

This year’s forum featured several advanced inspection robots, including a crawler from Diakont Advanced Technologies, that can test for corrosion at the bottom of a storage tank while it is still filled with gasoline. Not taking a tank out of service for inspection would save companies hundreds of thousands of dollars per tank.

Still, the most impressive part of the meeting involved robots that did real maintenance. 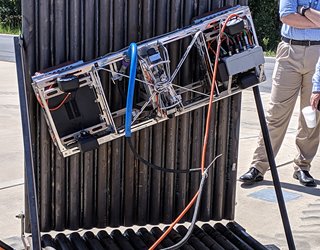 This Baker Hughes GE robot can inspect and clean a boiler’s waterwall without first disassembling it. Photo: Alan S. Brown
One crawler from Baker Hughes GE Inspection Technologies, for example, cleans boiler waterwalls. These are welded arrays of tubes that carry water through a boiler for heating. To clean the waterwall, technicians first build a scaffold. Then they dismantle the wall and inspect and clean those tubes.

The robot does away with all that. Using four magnetic rollers, it crawls up the waterwall. Operators use advanced cameras and sensors to inspect the structure and high-pressure water jets to clean the tubes.

Seeing it in action is hypnotic. As the 5-ft-wide robot travels up a waterwall, its noisy waterjets create a shower of water ahead of it. When it completes a section, it rotates and moves to another. A lower-profile cousin (not demonstrated at the Forum) slips under hard-to-reach structures to clean, polish, grind, and paint.

The mobile welding robot, from Robotic Technologies of Tennessee, is even more impressive. The lightweight cobot arm lets it work around humans. The arm, which holds a torch, sits on a twin-track base with powerful magnets. These let it weld horizontally or vertically and stiffen the robot to suppress vibration.

Robotic welders date back to the 1960’s when they began appearing on automotive production lines. Today, smaller welding robots based on cobot arms have begun to show up as well. Yet both types of robots have one thing in common: they remain fixed and parts to be welded come to them.

Shipyards are the exception. There, gantries lift heavy robotic arms to they can weld large metal plates together. Yet those robots cannot get into small spaces to add collars, clips, tie-downs, and erection joints, small features that account for half of shipyard welders’ time. 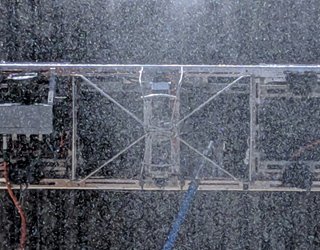 The Baker Hughes GE robot in action. Photo: Alan S. Brown
The new robots are already working alongside human welders in several U.S. shipyards. One version carries a 20 lb. welding wire spool, while a smaller robot relies on a welder to set up a wire feed next to it. The robot is often used for welding, where it is hard for humans to reach.

The greatest challenge to building the robot was learning an appropriate weld path, said Stephen Canfield, a professor of mechanical engineering at Tennessee Technological University who founded Robotic Technologies of Tennessee (RTT).

“In a traditional robot welding system, the robot is fixed and very accurate, and part is placed in a fixture which is also very accurate,” he explained. “This works fine when the part is small and can be brought to the robot, and there a sufficient number of these small parts to justify the time of building a fixture and having a technician ‘teach’ the weld path.”

Mobile robots change the equation, Canfield said. The moving base makes it hard to track its arm position and orientation precisely, and even small variations in large parts would throw off its ability to make a good weld. Also, conventional robots have to be ‘taught’ every weld path.

“This would defeat any labor savings associated with mechanization,” Canfield said.

Instead, RTT uses a two-stage process to overcome those problems.

This starts with a LIDAR (Light Detection and Ranging) laser scanner similar to those used in mobile robots mounted on the robot’s end-effector. As the robot moves, it continuously builds and updates a map of its surroundings. By matching the scan with a CAD model of the section being welded, the robot can find an approximate path for the weld.

Then it performs a higher resolution scan along the approximate weld path to achieve the precision needed for the job.

Further Reading: Something to Prove

How does the robot compare to a human? The map-build scan usually takes place in the background. The precision scan—something humans do while welding—adds about 15 percent to overall weld time.

“The primary advantage to the robot in terms of speed is that it does not take any breaks between welding,” Canfield said. “Due to the rigorous nature of welding, arc-on time, the percentage of time actually spent welding, is generally higher for robotic or automated welding than manual welding.”

The robot is undergoing beta testing in several shipyards, and the company expects to commercialize it within the next nine to 15 months, Canfield said. Meanwhile, RTT is looking to increase the types of welds the robots can do. It also plans to add a new sensor that will enable the robot to check a weld while welding it.

While maintenance welding—fixing broken parts—is still several years away, alternate tools on the end effector could enable it to plasma-clean surfaces or repair them using cold spray coatings.

This type of versatility in a robot once seemed like a stretch. But, as ASME’s Robotics for Inspection & Maintenance Forum showed when the economics are there, robotics is a field that can move quickly to meet demand.