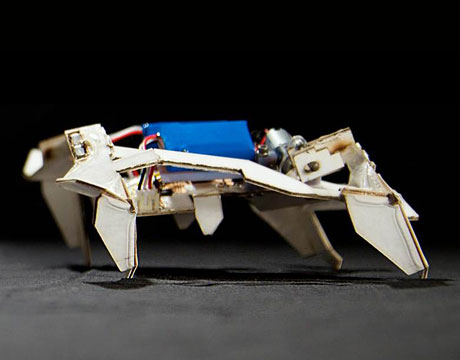 For an inanimate object, a piece of paper can pack a big punch. Over its 2,000-year monopoly as a medium for published thought, paper has provided the static catalyst for countless scholarly, social, religious, and political movements. But today, paper is propelling a different kind of movement: its own. Engineers are rediscovering the timeless practicality of paper in the fabrication of smart, low-cost robots that walk, scoot, and grasp all by themselves. Experimental paper devices capable of unattended motion are under development in a number of labs, and may someday have legs in commercial applications.

As generations of origami artists and paper-plane designers can attest, a sheet of paper can become almost anything the creator wants it to be. It’s light, flexible, and cheap. It can be cut, folded, stacked, or rolled into useful 3-D shapes. It can be engineered for extra rigidity, reflectivity, tensile strength, or other desirable properties, in combination with newer 2-D materials such as grapheme.

One such approach by professors Yong-Lai Zhang and Hong-Bo Sun of Jilin University, Changchun, China, could lead to a new category of fully autonomous, solar-powered paper sensors and MEMS devices. Their work exploits single-atom-thick graphene sheets to create paper devices that spring to artificial life in response to humidity changes in the air around them.

Sun, the director of JU’s Center for Ultrafast Optoelectronic Technologies, said his team’s ‘bots begin with graphene oxide (GO) paper exposed to UV radiation from sunlight. “We recently found that focused sunlight can reduce GO paper to some extent. Therefore, one side of the GO paper can be fully reduced due to the UV radiation-induced photochemical reactions, and the other side can survive as pristine GO.” This effect significantly alters the reduced graphene oxide (RGO) surface’s water-repelling capacity. Bilayers of RGO and GO react differently when approached with moisture, for example, an engineer’s sweaty finger, he said. “In response to moisture, the anisotropic water adsorption causes it to curl in seconds.” The team has adapted the technology into robots that instantly morph from flat paper strips into inchworm-like crawlers that scoot across a surface, as into more complex autonomous claws that grasp and release tiny objects.

What could be a more natural addition to the paper robotics fold than a device that actually folds itself up? Such a device developed at Harvard’s Wyss Institute for Biologically Inspired Engineering captured national headlines last year. The origami-inspired automaton is a useful byproduct of the institute’s long-standing effort to develop robotic insects, but it could have a life of its own in applications where robots are sent into environments where people can’t go – other planets, for instance. Space-confined craft could hold several flattened robots that self-deploy and go about their duties without human aid. To demonstrate that concept, graduate student Samuel Felton used the mathematics of origami to calculate a paper-folding pattern that would produce a self-propelled droid. His device begins as a perfectly flat planar surface with a few protruding electronics on top to provide power and programming. But flipping the switch sends the device into a tightly choreographed four-minute metamorphosis of folding that culminates with a colorful, crab-walking quadruped.

The self-folding action is courtesy of the substrate’s unusual composition: a sandwich of ordinary paper, a flexible circuit board, and a sheet of contractile pre-stretched polystyrene (PSPS) – better known to generations of crafty kids as Shrinky Dinks. Together, the materials form a shape-memory composite multilayer cut to the appropriate shape to facilitate folding. Embedded, heat-responsive hinges placed along the fold lines enable the PSPS layer to bend into the desired position when heated to 100 degrees Celsius, creating rigid folds once cooled. The microprocessor controls the precise heating/folding sequence based on preprogrammed steps determined through computational origami. The result is sturdy 3-D object that scurries into action without any operator intervention. By choosing different shape-memory materials and more elaborate programming, the team said self-folding robots could be engineered for almost any purpose.

These paper ‘bots are the vanguard of a coming wave of useful devices, microfluidics, and medical diagnostics. Paper meets a number of key engineering and economic criteria for devices that may help developing nations address problems in health care, environmental monitoring, and energy storage. But communication across this multidisciplinary community can be difficult. It doesn’t help matters that researchers trying to search the scientific literature using keywords like “paper” typically end up with a long list of irrelevant citations in which the word appears as a synonym for “article.”

Andrew J. Steckl’s Nanoelectronics Laboratory (NanoLab) at the University of Cincinnati is working to elevate awareness of paper-based technologies and to help codify the literature of this embryonic field. A graduate-level electrical and computer engineering course dubbed the “Paper Laboratory” takes advantage of paper’s versatility and low cost to expose students to translational engineering. Students must conceive, design, and build a novel working paper-based machine in one term. Steckl grants them unlimited creative license but strictly enforces his end-of-term deadline and a $50 development budget per project. The 2014 Paper Laboratory cohort developed paper-based technologies ranging from a flexible audio speaker to an oil detector to a smart diaper for biometric diagnostics.

One Paper Laboratory student took a different, and much-needed, approach to the problem of literature searching. That project, the Digital Paper Library, produced an extensive database of published work in all facets of paper-based electronics, which Steckl envisions as the basis of a public Web resource available to other groups in the field.

“As cost becomes an increasingly important factor in device production and distribution, low-cost recyclable materials such as paper are bound to play a key role,” according to Jason P. Rolland, senior director of research for technology non-profit Diagnostics for All and Hewlett-Packard R&D engineer Devin A. Mourey. Co-editing an entire special issue of the MRS Bulletin focused on paper-based technologies, they describe a field rapidly moving from proof-of-concept to real-world impact. “Despite the prevalence of paper, this field is arguably still in its infancy. If devices are designed using low cost as a first principle, a tremendous global impact is possible – leading simultaneously to both larger market potential for product and higher quality of life in developing nations.” Michael MacRae is an independent writer.

For Further Discussion
These paper ‘bots are the vanguard of a coming wave of useful devices, microfluidics, and medical diagnostics.