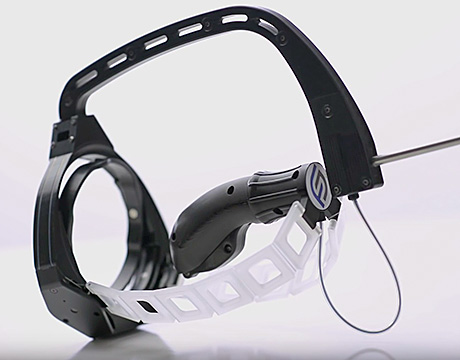 Robotic Surgery Without the Robot

Robotic surgical systems have made great strides in recent years, becoming a critical component of most advanced surgical centers’ capabilities. Enabling minimally invasive, or laparoscopic, surgery in particular, these robotic assistants have helped ensure better outcomes and shorter hospital stays for patients. However, now a new device aims to build on this success and make surgery even simpler for many patients.

“Previously, laparoscopic surgery was very tough because it was like trying to tie your shoelaces with chopsticks,” says Shorya Awtar, associate professor of mechanical engineering at the University of Michigan. “Existing laparoscopic instruments lack articulation and are inserted into the patient via small incisions. As a result, many surgeons require years of training to use such instruments for laparoscopy.”

Robotic surgical systems changed this, making laparoscopy easier by providing articulation and intuitive control, but the cost has often been prohibitive. The “FlexDex” was created with the goal of trying to offer surgical capabilities similar to advanced robotics systems, but at a much lower price, being mechanically focused without electronics.

“About a decade ago, I was working at General Electric in R&D as a mechanical engineer, focusing on high-tech problems, and I came across robotic surgical systems,” explains Awtar, the co-founder and CTO of FlexDex Surgical, the company behind the product. “While an amazing technology, it seemed too expensive and complicated for widespread use. I was convinced that there was a simpler, less expensive, and more compact design possible that could reach the masses.”

This led him to the first design of what would become the FlexDex, which offers a user interface that attaches to the surgeon’s wrist by a gimbal and which has an elongated shaft that enters the patient’s body. It utilizes a pair of jaws, capable of clamping or grasping, that articulate to reach more difficult locations within the body. A patented mechanical system finds the center of rotation of the instrument’s handle at the same point as the surgeon’s wrist.

Already in use at some medical facilities, the device is not meant to be a replacement for robotic surgical systems in all situations, Awtar says. Examples of surgical procedures that he says his device can accomplish include hernia repairs, colon resection, and hysterectomies.

“We want this to be available in every hospital, every OR around the world,” he says. “There are so many patients who need minimally invasive surgeries but don’t have the means. We’d like to help make a difference there.”

For Further Discussion
There are so many patients who need minimally invasive surgeries but don’t have the means. We’d like to help make a difference there.Shorya Awtar, co-founder and CTO, FlexDex Surgical