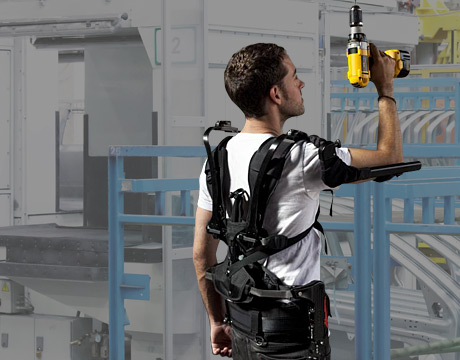 In 2003, researchers at the University of California, Berkeley, created Bleex, a robotic device that attaches to the lower body to complement the user’s strength. Fourteen years later, variations of these devices, which go by a number of names, including robotic exoskeleton and exosuit, are used primarily in health care rehabilitation. They allow wearers to operate, for example, a paralyzed limb, and help stroke victims move limbs as they regain strength and range of motion, says Dan Kara, robotics researcher at ABI Research, a technology market research company in New York.

In 2014, the ReWalk system became the first personal robotic exoskeleton to be approved by the U.S. Federal Drug Administration. The battery-powered robotic suit, from ReWalk Robotics of Yokneam, Israel, attaches to the legs and lower back. It contains motors at the knee and hip joints and sensors to help it adjust with each footfall. While wearing the device and holding two forearm crutches, someone with complete lower-limb paralysis can walk.

Because the suits are expensive—the ReWalk suits cost about $80,000—their makers have looked to uses in other industries. Manufacturing, agriculture, and construction were obvious matches because the suits could be worn to enhance strength, Kara says.

In manufacturing, the exosuits augment human motion to allow for more lifting strength and for improved production on repetitive tasks like squatting, bending, or walking, Kara says. Worker wearing the suits will also be less prone to severe injuries from accidents or overwork. Worker overexertion costs U.S. employers around $15 billion annually in compensation, he adds.

When bending forward while wearing an exoskeleton from SuitX, compressed-air springs in the back of the suit take some of the lifting load off the wearer. A shoulder unit uses a similar assist-mechanism for lifting or working overhead, says Homayoon Kazerooni, chief executive officer at SuitX of Berkeley, CA, which makes exoskeleton systems for the legs, backs, and shoulders as well as a full-body version.

ABI Research forecasts the robotic exoskeleton market will reach $1.8 billion in 2025, up from $68 million in 2014. This year, about 6,000 suits will be sold, mainly for rehabilitation. By 2025, ABI expects to see about 2.6 million on the market thanks to adoption by the manufacturing and construction industries.

Still, the suits have yet to see widespread adoption within factories and plants. That’s slowly changing as implementations begin.

Since the end of 2016/beginning of 2017, the BMW Group Plant in Spartanburg, SC has deployed 66 “Airframe” Exoskeletons from Levitate Technologies, San Diego, CA, which provide shoulder support, and multiple Chairless Chair units from the Swiss company Noonee.

The EksoWorks Vest is a shoulder and arm support exoskeleton with a headrest designed to alleviate the strain of continuously working with heavy tools above waist level. It uses no power, but provides ergonomic upper body and arm support that makes objects seem to weigh much less than they do and enables a worker to operate in a factory line posture without fatigue, according to Ekso Bionics.

The Chairless Chair locks into place when a worker has to crouch or stand for prolonged periods. It reduces the pressure on the knee and the rest of the leg.

Both the chairless chair and the should and arm support suits sell for about $5,000 each, far less than the suits mean to help those who are paralyzed walk.

Eleven lower-body exoskeletons are already in use across several BMW Group plants in Germany. The exoskeleton consists of movable splints affixed to the legs or torso and locked in different positions. The leg support structure can transform prolonged standing into sitting to improve the comfort and flexibility of working conditions, says Christian Dunckern, Head of BMW Group production system, planning, toolmaking, and plant engineering.

“It will be possible to further reduce ergonomically unfavorable and strenuous tasks, giving workers an opportunity to apply their cognitive skills to the best effect,” he says.

Parker Hannafin, Cyberdyne, Rex Bionics, and other companies currently make these suits, most of which were first created in tandem with military developers.

For BMW Group, the exoskeletons complement other robotic and factory digitization efforts. They push robotics down to the operator level by allowing production-line workers to benefit from the robots’ strength, Dunckern says.

BMW may bring in more exosuits in the future, after further evaluation, he adds.

“In the time of smart devices and digitalization, we must still keep an eye on the added value the applied technology offers to the company,” Dunckern says. “Nobody is better qualified to judge this than the people who actively shape our production system on a daily basis.”

For Further Discussion
Nobody is better qualified to judge this [value] than the people who actively shape our production system on a daily basis.Christian Dunckern, Head of BMW Group