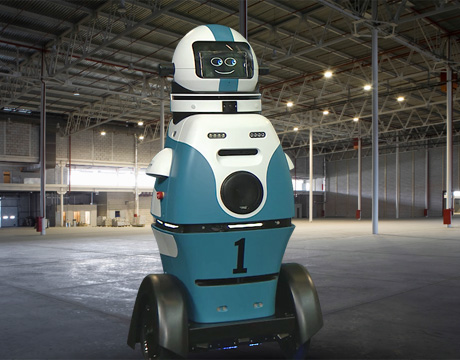 A thief looks to one side, then the other, heftly maneuvers over a fence and darts to each window. He sees what he’s looking for, and then? A security guard calls out, sirens flash and an alarm goes off. The thief freezes before realizing he’s actually been busted - by a robot.

Lakewood, CO-based startup Gamma 2 Robotics is behind RAMSEE, a five-foot, 200-pound security guard robotthat moves at top speeds of about 25 miles per hour with the help of a brushless motor.

“These robots can particularly help in dangerous situations,” says Francis Govers III, chief robotics officer for the company. “You don’t want a human dealing with a fire or a thief with a gun if you can avoid it.”

At the top, RAMSEE has a swivel-head pan tilt unit on its head that has both a high-definition camera and an FLIR thermal camera. It’s arranged so both cameras always point at the same target.

“The face allows two-way video conferencing and below that, 360-degree cameras run at near IR [infrared],” he says. “You have infrared illuminators that the robot can see that people can’t see. It also has LIDAR [light detection and ranging] for things like mapping, obstacle avoidance, and motion detection. And it uses sonars and infrared detectors to see small objects.”

Designers went through four sets of prototypes to get to this current model. They started with an existing robot platform and put in new computers and sensors and, in a next generation, switched to brushless motors away from a previous setup containing gear motors and pulley. “For the third generation, we built a mockup of the inside of the robot with new chassis, new wheels, et cetera,” says Govers.

Inertial measurement units sense bounce and tilt and sensors can help it “know” stairs are coming, he adds.

But the software is also a key component. “The software is ROS and we have two internal processors that are both Linux based. One is ODROID-XU4. It has 8 CPUs. The other is Nvidia, which is our vision processor; four regular cores and 130 GPUs. It was originally put it in because the thought was that it would be doing a lot of stereo vision but now it’s migrated into artificial intelligence and running our own program.”

Even though the robot can be put in harm’s way, he says the goal for the guard is to observe, report, and be a distraction. “In the distraction role, it has very bright head lights, strobe lights like a police car, and that loud siren," he says. "In the dark it would be quite intimidating and the synthesized voice doesn’t sound robotic at all.”

Presently, they are working on improvements such as face recognition. “The goal is to know who the workers are so they don’t see them as intruders,” he says. “But the idea is to be able to tell if there are ex-workers who you want to make sure aren’t on the premises.”

Though a specific price point isn’t being shared at the moment, Govers says it will be under $100,000. “Our hope is this can be a compliment to security plans already in place,” he says. “This robot has the ability to be a real friend to companies.”