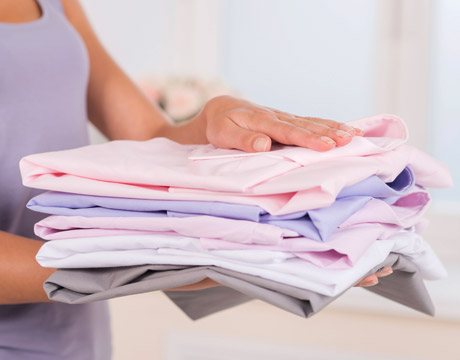 A Robotic Machine for Laundry Folding

What could be more fun than folding clothes? For most, pretty much anything. Gal Rozov doesn’t like it either and, by his own admission, he wasn’t good at it. “I’m the world’s worst folder,” he laughs. “I’m not kidding when I say that.”

But he hopes his new invention will make consumers the ones who get the last laugh. His company is working on FoldiMate, a self-folding machine. Yes, it may not have just been a daydream you had when you worked your way through that laundry bin.

The human being’s involvement seemingly ends at the “easy clipping” part, clipping it on and letting the machine do its part. Pushed into the folded position, the clothing comes out completed through a chute.

There are sensors within the robotic device, which needs to sense and adjust according to the item. “There are minimum sensing capabilities that we need to identify the outer limits of each item. It’s labor intensive and can do many shirts and dresses but not, say, underwear: a small item. It brings the item onto a folding surface, then treats it with the mechanism that allows us to define the crease line—the folding line—and we are moving it from side to side using rods. You can see it clearly in our video.”

While you’re “feeding it,” it’s already working on what you’ve given to the machine, says Rozov, CEO and founder of the company FoldiMate, which is based in Silicon Valley and has an R&D lab in Israel.

“Prototype five is the first one where we had all the mechanisms,” he says. “It’s now on easy clipping going into the machine, folding, unloading, and stacking built into one prototype. We had prototypes that did most of the work but this is the first time everything is together and works. We gave a sneak peek during CES and are hoping for a release in 2018.”

They’re planning for a machine size that is two-thirds that of a normal washer or dryer soldin the U.S., and are currently envisioning a price of $850. The website touts a folding speed of two times as fast as folding yourself.

Rozov says this experience was an evolution and has been a journey of many years to combine the technical fit mechanically, mechatronically, and robotically. “We wanted to push ourselves, but you want to make it right and you have commitments, but it’s been a vision which goes back many years now,” he says. “I’m excited to see it happen but I was willing to stay patient.”

More than 100,000 people have registered for the product, he says. “We’re very optimistic and are growing as we speak,” he says. “We keep hearing from people who would love to have one less household job to do. Make one thing a little easier and you make people a little happier.”

It’s now on easy clipping going into the machine, folding, unloading, and stacking built into one prototype.Gal Rozov, CEO and Founder, FoldiMate