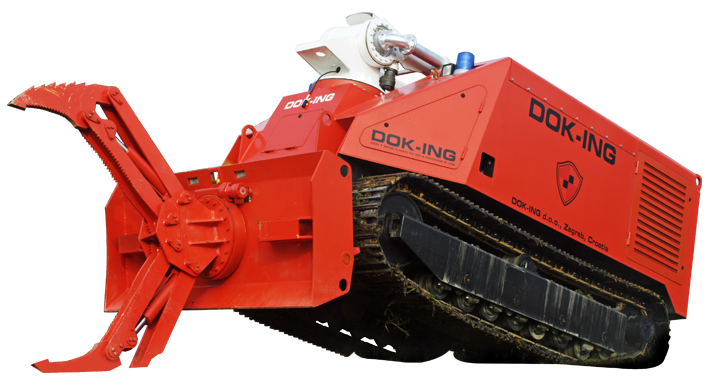 Fires create dangerous conditions, but fires at some locations, like flammable or explosive material storage areas and nuclear power plants, are too hazardous for human firefighters to enter.

Manufactured by Croatian manufacturer DOK-ING, FireRob is a specialty firefighting vehicle that a single operator can direct on the ground by remote control. It extinguishes fires without intervention of firefighters with a high-pressure cannon on a hydraulic arm that pumps water up to 55 m away.

It carries 1,800 L of water and 600 L of foam in its two onboard tanks. DOK-ING says it was inspired by video games.

It punches through objects such as walls and it grips, lifts, and removes objects and obstacles with its blade-tool attachment at the front of the vehicle.

DOK-ING coordinated an international consortium with partners in Croatia, Greece, Spain, and the U.K. to help evolve prototypes made in 2006 into their firefighting vehicles of today. Beginning in 2008, a European Commission R&D Program award (called FP7) of 1.04 million euros enabled the consortium to develop and integrate several advancements with a two-year project.

An important project requirement was that the vehicle perform well in a fire situation without suffering significant damages, able to safely operate and return from the fire site. Researchers and engineers developed a new, proprietary, multilayer thermal coating and corresponding vehicle application process.

The high-temperature-resistant fire protection shield is based on reflective intumescent materials that bubble, expand in volume, and become denser when exposed to fire. At a recent conference, DOK-ING reported the multilayer coatings on MVF-5 are able to withstand 700 C for 15 minutes or 400 C for 30 minutes, making it suitable for high-temperature areas. DOK-ING officials say it is able to get closer to a fire than other firefighting vehicles. It can also work longer there while the remote control operator is at a safe distance away.

Another requirement was to add environmental feedback for safer control. A new software package based on pattern-recognition algorithms was developed that recognizes the presence of humans as seen by a high-resolution thermal vision camera mounted on the water gun.

Five additional waterproof cameras mounted on the gripper, two bullet cameras on each side, and rotating cameras at the vehicle's front and rear also were integrated to provide full view over the vehicle and surrounding environment.

DOK-ING reported achieving a visibility enhancement over a 2-km range, and operators are alerted when humans are detected. The final task was to improve remote-control operation of the vehicle in reduced visibility conditions. An inertial navigation system was developed and validated during the project, integrating GPS and IMU sensors, algorithms, and software that achieved a system dynamic positioning range of plus or minus 2 m.

Other smaller, remote-controlled vehicles have been adapted to fight fires, such as Segway's water cannon prototype, QinetiQ's remotely-operated vehicle, and others that also contain cameras, high-pressure hoses, and remote operation. Fire-rob is the only that integrates hydraulic arm blade, grip, and other tool attachments for path clearing in difficult terrain or inaccessible areas, and carries it's own water and foam tanks.

The new FireRob has better and more reliable electronics, a smaller dimensional footprint enabling it to be transported in the back of a truck or by helicopter, and higher capacity water and foam tanks than the original prototype units. Its onboard 2,000-L-per-minute pump and water tank can provide a powerful, steady stream of water for nearly a minute. When more capacity is needed, the unit can be connected to alternate water or foam sources like a fire truck, hydrant, or a lake. DOK-ING plans to create a hybrid diesel/electric version in future systems.

Two FireRobs have been manufactured and are being used at several Russian nuclear power plants and equipment. Two more are currently in production. Majeti says they have the capacity to produce 60 units per year.

An important project requirement was that the vehicle perform well in a fire situation without suffering significant damages, able to safely operate and return from the fire site.