Robotic Co-Workers Do the Heavy Lifting

Robotic Co-Workers Do the Heavy Lifting 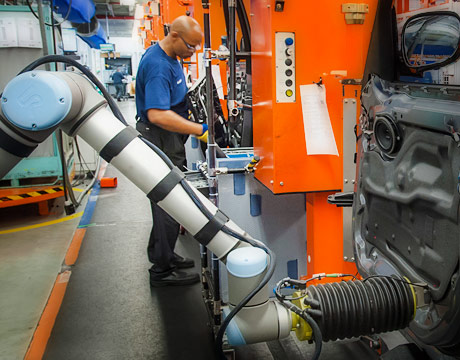 At BMW in Spartanburg, S.C., human and robot work the assembly line together without the fences that formerly kept them separated. Image: BMW

At BMW, robots have their human co-workers’ backs.

The automaker is beginning human-robot collaboration at its U.S. production headquarters and its eight German factories, with an eye toward assigning robots the repetitive tasks and the heavy lifting and letting humans use their brains and save their backs.

In the past, man and machine worked in separated areas at BMW, cordoned off by protective fences. But in the last five years, this setup has changed, says Harald Krüger, a member of the BMW management board.

Across the BMW plants, nearly 60 lightweight robots and a few heavy industrial robots now share their surroundings with humans and without protective devices that formerly separated them. To keep everyone safe, the robots run at a low speed within a defined environment and they stop immediately when their sensors detect an obstacle in their way, Krüger adds.

“Robots that assist production workers in labor-intensive tasks will characterize the factory of the future,” he adds. “They have the strength and mechanical accuracy; and they perfectly complement humans’ flexibility, intelligence, and sensitivity.”

The kickoff began five years ago with BMW’s first lightweight robot, which took its place among the workers at its assembly line in Spartanburg, SC. Stefan Bartscher, a BMW innovation manager in Munich, Germany, developed the project along with robotics producer Universal Robot.

“Miss Charlotte,” as the line crew calls their robot, still-mounts sound insulation to doors. Three others have since joined her. Together with human workers, they equip the insides of BMW X3 doors with sound and moisture insulation. The sealing protects the electronics in the door and the entire vehicle interior against moisture.

Assembly line workers do their jobs first. They fix the insulation in place, by affixing a foil with an adhesive bead inside the door. They then press it into place, Bartscher says. Formerly, workers then used a manual roller to press it even more firmly to the door, a labor-intensive and repetitive task. But today, robotic arms equipped with roller heads perform the task, which requires maximum precision.

Plant managers can exactly and continually measure the rolling power used to fix the insulation in place, Bartscher adds.

At the BMW plant in Leipzig, Germany, lightweight robots apply adhesive to automobiles’ front windows. The task is particularly challenging because the viscous adhesive must be spread over the large glass surface in one go and without any fluctuation in film thickness, a task collaborative robots are up for and good at, Bartscher says.

While they’re not so good at overseeing inspections, they are good at lifting heavy things. So humans and robots work together on that job at the BMW plant in Landshut, Germany, which makes the crankshaft housing for all BMW vehicles.

BMW executives there knew that automating the quality process could protect employees who lugged the components into place for inspection and then held them into position. That lifting, lugging, and holding could be hard on the body, Krüger says.

Even with the automated process, skilled workers still needed to keep a watchful eye on inspections. To combine robotic automation with human brainpower and sight, automation company MRK-Systeme GmbH of Augsburg, Germany, built two identical applications in the inspection area.

At the plant, an employee controls one robot via a joystick rigged to maneuver the components into position to be inspected for faults. No more lifting for employees, Krüger says.

But large-scale, industrial robots aren’t left out of the collaboration process, he notes.

In the transmission installation unit at the automaker’s Regensburg, Germany, factory, workers lead a large robot to the screw-bonding station. First, a laser-based system guides the robot into place, then, its human guide places it with more exactness and makes minute adjustments, Krüger says

These collaborations show that, although robots don’t have brains, by saving their fellow co-workers muscle strain and backache, they sure do have a heart. Jean Thilmany is an independent writer.

For Further Discussion
Robots that assist production workers in labor-intensive tasks will characterize the factory of the future.Harald Krüger, BMW