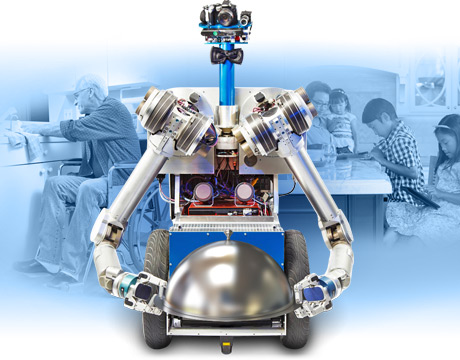 You know you’re probably doing well financially if you have a butler. But Professor Siddhartha Srinivasa of the University of Washington (UW) wants everyone to have one. He is part of a team working on what he calls a robotic butler, which might one day do everything from feeding those with disabilities to putting away the dishes after the meal.

Starting his team’s work at Carnegie Mellon University and taking it with him to the University of Washington, HERB has been a journey more than a decade in the making.

“We were focused seriously on cleaning up tasks, things that had to deal with real clutter in a real kitchen environment,” says Srinivasa, professor of computer science and robotics at UW. “But we also wanted to ultimately get away from contrived environments and have them be able to move around with humans. One task was picking up coffee mugs all over the lab and loading them into a dishwasher. We always wanted to play with the stakes when dealing with real world objects.”

HERB, which stands for “Home Exploring Robot Butler,” began with the visual of a single arm segue base, he says, but took a measurable leap with the 2.0 version. “With two arms and a neck and a head sitting on top of pretty much the same base, it had an upgrade to beefier computers,” he says. “3.0 added, among other things, two wheels on a cylinder, and an omni-directional base not just moving back and forward but sideways. That’s important when you need to go through a crowd.”

HERB also went away from a home brew head to one that was being used in a DARPA challenge.

“This version had HERB being around people and being close to them and interacting with them,” says Srinivasa. “Effective, seemless, and expressive in its attentions and we wanted it to be accepted and liked by people, so we worked partly on robot-human interaction. When HERB comes into a kitchen in a few years, a human may not want to leave the kitchen if we can make it so they can work together.”

3.0 is designed to hand things to people, take things from them, and track lips to know when someone needs an object. It even has SONAR capability for translation of some speech, says Srinivasa. “He can clear a table and do what a caregiver can do to some extent. HERB can bring a meal and even feed a meal to someone with a high spinal cord injury.”

The new head also has a stereo camera, a spinning laser, and can do a 360-degree scan of the room. The previous head only moved about 70 degrees either way.

“I want HERB to work in a human environment so there are two kinds of studies we’re looking at presently,” he says. “One is shared workspace collaboration: how you and HERB can work together on something like, say, putting together a bookshelf. The second is long-range prediction of people: watching HERB walk through a hallway or a crowd and safely navigating between people.”

Srinivasa also wants to point out that an important part of HERB’s leap has come from algorithmic work. “An advantage of a robot like this is it focuses on algorithms so we know what problem we have to solve,” he says. “Algorithms that once took twenty minutes to run now take twenty milliseconds. The more computations per second, the better you are in terms of reacting. It’s also the ability to search large spaces from algorithmic ability.”

Even though he has a three-year-old and a six-year-old, Srinivasa does regard HERB a little like his third child, he laughs, and is intrigued to see what he can “learn” next. “I’m lucky to get to play with toys for a living,” he says. “Hopefully this one will one day help humans a great deal.”

For Further Discussion
I’m lucky to get to play with toys for a living. Hopefully this one will one day help humans a great deal.Prof. Siddhartha Srinivasa, University of Washington