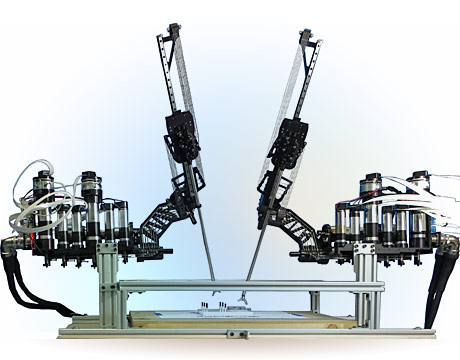 The Raven surgical robotic project has continued to expand and grow over the years since the original grant from the army medical research program more than a decade ago, says Blake Hannaford, professor of electrical engineering at the University of Washington. Now used in 16 labs around the world, Raven began as a medical vehicle for simplicity.

“It started out as an attempt to develop a surgical robot that was simple and more portable than da Vinci,” he says. “Along the way, researchers were interested in working on surgical robotics and needed a platform to do it. We proposed to the NSF to build seven of these and give them out to different labs around the country that were at top universities researching surgical robots. They gave us funding for that and word got out and others were offering to pay us. Now all those labs use it.”

“It utilizes the laparoscopic approach, elongated instruments used through ports through the side of body to be minimally invasive to the body,” he says. “They are designed to position and orient instruments with pivot access. And again, it minimizes disturbance to skin. We designed a mechanism to do that and used the computer to optimize it to be the smallest possible mechanism that would cover the workspace. Before we built the robot, we did a study where we put instruments on surgical tools.”

It wasn’t easy to engineer the robot to be compact but also be sufficiently mobile and strong to do the procedures,” he says. “For surgical robots, you need to keep instruments simple partly because of the needs involving sterilizing,” explains Hannford, who is a co-founder of the spinout company Applied Dexterity, which builds Ravens. “It needs to be a reasonable cost because of frequent replacing needed to be done. There’s also strength of materials. There can, for example, be strains on metal so it can be pushing the limits on the strength of metals.”

With Raven II, they switched motor types. “It went from so-called brushless DC motors to brushed motors and we did that to reduce wires and cables,” says Hannaford. The decision was also made to make the body of the base much more narrow and longer and that allowed for configuration with four Ravens for the patient instead of two, he says. The instrument interface was also changed from coaxial. “They retrofitted Raven I so software and instrument would be compatible with Raven II,’ he says. “If you need four arms for surgery, you can have it.”

The future looks bright, with even NASA approaching the team about Raven because it has a research study in the space station looking at long-term exposure of rodents to microgravity. “The astronauts didn’t have time to do all the work it would involve and this allowed for assistance in helping with getting results,” he says. “There will also be more work on the autonomy of surgical robots. We’re not anticipating fully automatic operation but adding automated functions that help a surgeon. For example, if you have sensors or imagers that can detect critical structure like a nerve then you can provide semiautonomous function.”

For Further Discussion
They retrofitted Raven I so software and instrument would be compatible with Raven II. If you need four arms for surgery, you can have it. Prof. Blake Hannaford, University of Washington