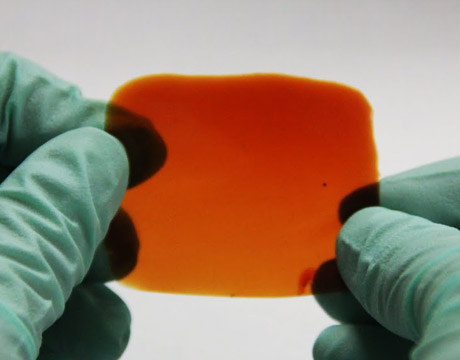 A new polymer film can repair itself when punctured. Image: UC Riverside

We watch our own bodies heal frequently and it seems commonplace, but imagining the same process in a robot? That doesn’t seem commonplace at all. However, a material currently being designed promises to do just that. Using forces between ions and molecules, it can possibly heal itself within a day, says Bryan Wong, assistant professor in the department of chemical and environmental engineering and the materials science and engineering program at UC Riverside.

“It’s a fun interest when you have a material that could fix itself without human intervention,” Wong says. “Like muscles that could self-heal, we wanted some material that can be simplified and constructed like what a biological organism can do. Robots are a key possible beneficiary, but it’s the idea of containing itself, whether extending to actuators and more.”

Polymers are the technology that is making this possible.

“They are like spaghetti, messy strands of large molecules,” he says. “Wrapped around each other in a messy way, within them are other molecules called ionic liquids that can be interfused in this polymer. This lets it ‘heal’ itself. When the polymer is cut, an interaction between the ionic liquids and the polymer is so strong that it allows it to be connected again.”

For those working on it, there was a cut made to the clear polymer.

“They cut it and could visually see from the naked eye that it was healing itself because the suture was no longer separated,” says Wong, who has a PhD in physical chemistry from MIT. “It actually fused back together after a certain amount of time.”

Wong was a part of doing calculations, focusing on quantum mechanical simulations, to understand how a material behaves. He used software called Gaussian.

But there are limitations to the material at this time. For example, there will be a scar. This may be a problem for a product that relies on its looks as much as its function. But it may be a lifesaver, scars and all, in other situations.

“Suppose you had a maintenance robot sent to Mars to help in a mission,” Wong said. “Looks might not matter as much as getting the equipment back into the fold. Imagine it staying still for 24 hours and turning it back on and it can do its business.”

He says the scarring tissue could possibly be modulated in the future for it to heal faster.

Still, the possibilities may be endless.

“Anything with a membrane it can potentially work for,” he says. “It can be used when you’re talking about a scaffold situation in medicine or for a sensor. It can even be used for wrapping and packaging materials. The ion diopold attraction is very strong. Even if mechanically separated, there is a strong attraction between molecule and ionic.”

Wong is excited about where it could lead. “When you have self-healing material, you wonder what self-healing could exist next?” he says. “This is part of why you get into science.”

When you have self-healing material, you wonder what self-healing could exist next. This is part of why you get into science.Prof. Bryan Wong, UC Riverside