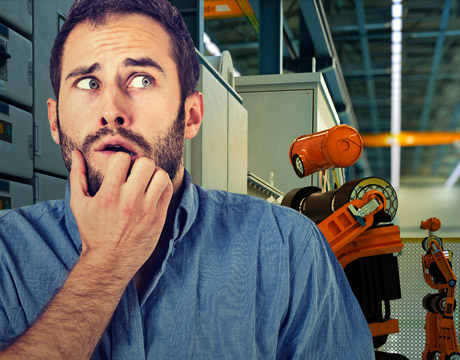 There is good reason why the idea of a dystopian future in which robots rise up to dominate their human creators strikes fear in the hearts of many people. If it looks human and acts human, and does human-like tasks, but is not in fact actually human, it makes us uneasy.

Filmmaker James Cameron tapped into this very primal fear in 1984 when he created the T-800 robot, Arnold Schwarzenegger’s character in The Terminator that was, in his words, “a chrome skeleton, like death rendered in steel.” Speaking to The Guardian in 2003, Cameron expounded on this view of technology, saying, “I see our potential destruction and the potential salvation as human beings coming from technology and how we use it, how we master it, and how we prevent it from mastering us.”

Promoting this worldview has made Cameron and his backers very wealthy. When adjusted for inflation, the Terminator film franchise has grossed more than $2 billion worldwide since 1984. But it tapped into larger concerns that many in the technology industry, particularly those who are designing the next generation of real robots, are facing as artificial intelligence (AI) and robotics become part of our daily lives.

Robophobia is a real condition, in fact, defined by psychologist Dr. Graham Davey in his 1997 book, Phobias: A Handbook of Theory, Research and Treatment as an anxiety disorder in which sufferers have an “irrational fear of robots, drones, robot-like mechanics, or artificial intelligence.” Its symptoms are typical of any anxiety disorder: panic attacks, sweating, anxiousness, discomfort, etc. But in the case of robophobia, they are kicked off by either the sight of a robot, being near a robot, or even just talking about robots. According to Davey, as much as 20 percent of the world’s population suffers from the condition.

Beyond this, many people also have very pragmatic concerns that robots and AI will soon swoop in and take their jobs, automating many of the tasks that human workers now perform. In this case, those fears are well grounded. According to Forrester Research, cognitive technologies like robots, AI, machine learning, and automation are expected to impact 7 percent of U.S. jobs by 2025, replacing 16 percent of all career fields while creating nearly nine million new jobs in new fields like robot monitoring, data science and content curation.

Overall robophobia, whether it is grounded in existential or economic concerns, is so pervasive that it is the next big hurdle in tech, believes Dr. Achin Bhowmik, the top robotics executive at Intel and general manager of the company’s Perceptual Computing Group.PCG is developing robots for real-world applications. Robophobia tops the list of issuesnow that many of the engineering problems involved in creating robots have been addressed, includingautonomous navigation, 3D vision sensing, and more.

“I strongly believe that [psychology and biology] are the only way to go after fulfilling the promises that robotics have in making it pervasive in a human environment,” he says.“The promises are just amazing.”

Intel has been deploying its technologies for retail stores, home assistants, eldercare and more, and human-robot interaction is becoming a critical part of interface design, he says. For example, one of the company’s robots is designed to function as a mechanical hotel butler, interacting with guests, welcoming them and taking them to their room. In the event the person needs something from the front desk—an extra bar of soap or a toothbrush, for example—the robot will take that order itself and deliver the requested items automatically to the room without any human interaction. The technology is there to support all of these functions, but the big question now is will humans feel comfortable and safe interacting with a robotic butler like this? What will they think when they open their hotel room door and see a robot holding their toothbrush?

“We couldn't have done all this, ranging from the human assistant robot in people's homes to the hotel butler robot to retail store robot to your Segway if we really didn't pay a lot of attention to the biological aspects,” Bhowmik says.

Dr. Kevin LaGrandeur, a professor at New York Institute of Technology and the author of Androids and Intelligent Networks in Early Modern Literature and Culture: Artificial Slaves, believes that part of the aversion to robots and technology is cultural and is a reflection of the fact that many of us, Americans in particular, have been bombarded with negative messages about robots and AI for decades. Cameron’s Terminator creation is just one example of this.

“Robots aren't as well accepted in American households as they are, say, in Japan where they're actually a lot more popular,” he says. “To some extent I think the Japanese have sort of a love affair with robots because they're kind of trained to it from the time they're younger. They have more cartoons and shows and things that have to do with robotic type of technology.”

In Japan there is also a greater need for robotics,in part because its population is aging and there will soon not be enough young people to take care of the older generations, he says. Robots will be needed to step in and handle those care roles, and that is a future for which the country is actively planning.Thatisn’t happening yet in the U.S.

Aside from this need, LaGrandeur believes the machines themselves are partly to blame for slow adoption in North America and Europe. Even though we are several decades into the robotic development process, many of those that are currently available, such as the Roomba, can be unreliable and confusing to use, turning off those users who are not tech savvy. That needs to change before wide adoption is possible.

What’s more, once robots become more multifunctional and useful, people will become more comfortable seeing and interacting with them on a regular basis, lowering the barriers to entry.

“Right now you either have robots that can carry on a conversation like Pepper, the new Japanese robot made with Aldebaran, and it's amusing but it can't do much of anything practical," says LaGrandeur."Then, on the other hand, you have a robot that can do one thing like lift a human being and move it to another bed, but can't do anything else. I think until we get more AGI, artificial general intelligence, I think people are going to see these things as of limited use.”

For Further Discussion
I strongly believe that [psychology and biology] are the only way to go after fulfilling the promises that robotics have in making it pervasive in a human environment, and the promises are just amazing.Dr. Achin Bhowmik, Intel