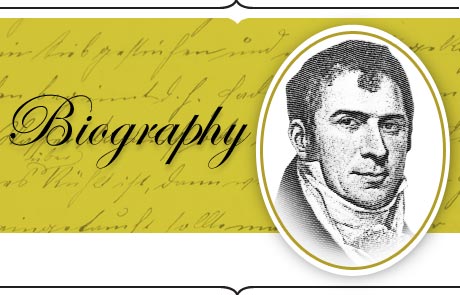 Overcoming several failures early in his career, American engineer and inventor Robert Fulton (1765 – 1815) is credited with developing the first successful commercial steamboat in the early1800s.

Fulton was born near Lancaster, PA, on November 14, 1765. At an early age, he was known to enjoy building mechanical devices. Some legends say he built roman candles, rockets, and a hand-propelled paddle wheelboat. As a teenager, his interests turned to art and at the age of 18 he moved to Philadelphia, where he was able to support himself through sales of portraits and technical drawings. At the age of 21, Fulton traveled to London to study painting with family friend Benjamin West, who was one of the leading American painters living in England. Fulton met with limited success as a painter and the public's response to his work was disappointing.

During this period, England was in the midst of its industrial revolution and Fulton was impressed with the many engineering feats that were being accomplished, particularly in the areas of canals, mines, bridges, roads and factories. Still living in England, he focused his creativity on current engineering challenges and became involved in a project to design a canal system to replace the conventional locks that were in use at the time. He was granted an English patent in 1794 for his first invention ? a double inclined plane system for hauling canal boats over difficult terrain. He later developed plans for cast iron aqueducts and invented a mechanical dredge to speed the construction of canals. His work with inland waterways culminated in a publication in 1796, entitled Treatise on the Improvement of Canal Navigation.

In 1797, he traveled to Paris to continue his research on canal construction, but soon became intrigued with the idea of building "plunging boat," a precursor to the modern submarine. Fulton sought funding for the project from the French government, which was at war with England, proposing to build a submarine-like ship that could be used to place powder mines on the bottom of British warships, somewhat like a torpedo. The French agreed, and Fulton launched the first submarine, the Nautilus, at Rouen, France. Although the ship performed well during testing, it wasn't fast enough to engage the nimble sloops of the British navy and the program was scrapped. He later tested several military inventions for the British government but met with limited success as well.

Seemingly undauntedby these failures, Fulton refocused his engineering creativity on the use of steam power. While in Paris, Fulton met Robert Livingston, the American foreign minister to France who also owned a twenty-year monopoly on steam navigation in New York state. After listening to Fulton's ideas for a steam powered ship, Livingston agreed to a business partnership in 1802 that would provide Fulton with the resources necessary to build his ship. One year later, they launched a modest steam-powered boat on the Seine river that was based on the design of fellow American John Fitch, who seven years earlier had demonstrated his steamboat on the Delaware River at Philadelphia, but was unable to make it a commercial success. While Fulton's steamship on the Seine River traveled at only 3 mph, he proved the technology could work with some modifications.

In 1803, Fulton returned to New York to refine his steamship designs which were based on the paddle wheel for propulsion. After overcoming British export laws, he acquired a steam engine from an English company owned by James Watt, who received a patent for a powerful steam engine the same year Fulton was born. After four years of development, in 1807, Fulton launched the Clermont, a steam-powered vessel that made the 150-mile journey up the Hudson River from New York City to Albany in 32 hours at a speed of 5 miles per hour, reducing the usual sailing time by 64 hours. It became the first commercially successful steamship. In the following years, Fulton launched 13 more steamships, including the Demologus, the first steam powered war ship.

Fulton died of pneumonia in New York City at the age of 49. As a result of his inventions, steamships became a major source of transportation on rivers and resulted in a significant reduction in inland shipping costs.

As a result of his inventions, steamships became a major source of transportation on rivers and resulted in a significant reduction in inland shipping costs.