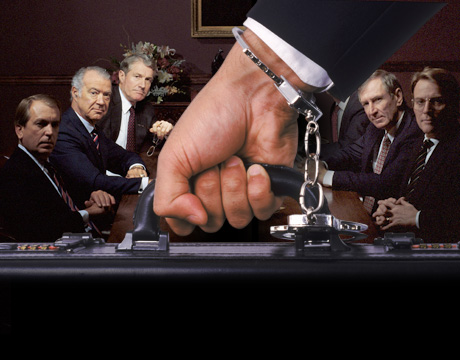 On the up side there's the money. On the down side there's potentially stolen ideas, a likely loss of control, and the possibility of being tossed out on your ear at a moment's notice.

Entrepreneurs seeking big bucks from venture capitalists likely know what the risks are. But do they know how to mitigate them? Joel West, a professor at the Keck Graduate Institute of Applied Life Sciences, Claremont, CA, who teaches innovation management and writes the Engineering Entrepreneurship blog, warns that when you turn to venture capital for funding you hand over all your power. "It's like the weather, everyone complains about it, but nobody does anything about it," he says.

Holding onto power in the face of a face-to-face meeting with venture capital execs means holding on to your ideas. Don't go thinking you'll try pitching to one group, then, based on the response you get, refine your proposal for the next one. Each person you explain your idea to is another person that might take your idea and run with it himself. "There are a lot of businesses where once you hear the concept it's easy to steal the idea. There are other businesses where the execution and the details are much more important," says West.

"There are different degrees to which the uniqueness of an idea is protectable," he continues. "If you come up with clever way to solve a problem—say, a particular material science that solves a manufacturing problem—once people know the material, they know the business. They can go off and do it themselves. In general, ideas are a dime a dozen. They need people that can execute."

Aside from keeping things close to your vest, the only other kind of protection is the legal kind, namely a patent. Forget about trying to get venture capitalists to sign a non-disclosure agreement. "Nobody is going to agree to it," says West. "There's so much information about dealing with VCs—go to Amazon, there's a dozen books, every business school has a course. VCs expect you to do your homework," he says. "If you don't get that aspect of how to do business, they're probably going to show you the door anyway."

Pending or otherwise, patents, prototypes, and business plans give you more bargaining power. "Anything you can do to strengthen your hand before you go to a VC is going to get you a better deal," says West. "If you have a prototype and a patent a year away from being granted, you have a pretty good leg up and better negotiation terms."

Holding on to Control

Once you've secured some funds you may find yourself in another kind of struggle—holding on to control. "There are all sorts of ways in which the interests of an entrepreneur and a venture capitalist can diverge," says West. "For the venture to be successful they need to be aligned, they need to stay aligned. If at some point they have contrary interests, it's not going to be pretty. Just because their interests are the same as yours today, it doesn't mean they'll be the same two years from now."

In the end, if you have a product that you want to see come to fruition your own way, and the idea is not time sensitive, it might be best to scrounge up your own capital, where possible. "If you want to answer to no one, you better provide all the funding," says West. With venture capital, "You will be at the mercy of whoever provided the funding," he says.

"That's the realty of taking investors," he adds. "They don't believe in you and want you to be successful like your mom. They want to make a buck and then move on to something else."

There are a lot of businesses where once you hear the concept it’s easy to steal the idea. There are other businesses where the execution and the details are much more important.Joel West, professor, Keck Graduate Institute of Applied Life Sciences