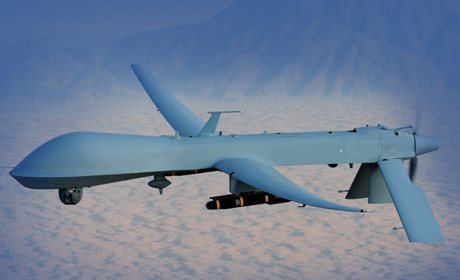 Growing military investment in robotic technology—by theU.S. as well as some 40 other nations—indicates that robots are rapidly becoming an important piece of tomorrow’s military arsenal.

The U.S. fields more than 5,300 unmanned aerial vehicles and more than 12,000 ground robots to reduce risk to soldiers, gather intelligence, and strike stealthily at remote enemies.

Israel and South Korea use armed robots to patrol their borders. Operators in cubicles in the U.S. routinely fly drone aircraft via remote control, monitoring, and attacking potential targets.

Peter W. Singer, director of the 21st Century Defense Initiative and a senior fellow in foreign policy at the Brookings Institution in Washington, D.C., studies the ethically disturbing nature of modern warfare. His previous books dealt with military services companies and the use of child soldiers. He wrestled with risks posed by robots in his latest book, Wired for War (Penguin, 2009).

“Robotic warfare is open-source warfare,” Singer said. “The technology is highly commercialized and affordable. With $1,000, an enemy could build a drone that has roughly the same capabilities of the Raven drones used by our soldiers in Iraq,” Singer said. The Raven is a small drone used as a scout by ground troops. During the Israeli invasion of Lebanon in 2006, Hezbollah fighters fielded at least four drones.

Singer believes the combination of robotics and terrorism will empower individuals at the expense of states and make it easier to launch terrorist attacks. While researching his book, Singer came upon an Air Force study that found that drones were the optimal platform for deploying weapons of mass destruction—and one against which we have no effective defenses.

How would America weigh going to war when it can put robots rather than citizens into harm’s way? “Many people I interviewed worried that it was going to make us more cavalier about the use of force,” Singer said.

Worse, he is concerned that war—rather than being seen through the memories, wounds, and losses of those who fought—will morph into entertainment. Circulating on the Internet are more than 7,000 clips of combat footage, mostly from drones. People e-mail them to one another, or set them to music.

Policy makers assume American technology strikes fear in enemy hearts. But overseas, the reverse can be true. Hearing a drone buzzing overhead, a Lebanese news editor told Singer that Americans were cowards “because they send out machines to fight us.”

And drone strikes can be counterproductive. In a May 2009 opinion piece in The New York Times, David Kilcullen (a former adviser to General David Petraeus, and Andrew Exum, an Army officer in Iraq and Afghanistan and now a fellow at the Center for a New American Security) observed that many targets are not positively identified and air strikes not always precise.

Thus, some attacks kill more civilians than terrorists. Coverage via the Internet and traditional media brings the horror of civilian deaths home to everyone in the region, radicalizing the population and driving civilians into the arms of local militants.

There may be unanticipated psychological costs to U.S. soldiers. Many drone pilots operate out of trailers at a military base in Nevada. They talk about the disconnect of working with virtual partners they may never meet to direct kills against enemy combatants that exist only on their video monitors.

Robot-based warfare may change the skills the military seeks in future soldiers. While training an F-15 pilot takes years, drone pilots achieve comparable results in mere months, and they pilot far cheaper aircraft. Indeed, one of the Army’s top drone pilots was a 19-year-old high school dropout—but he was an experienced video gamer.

Up to now, the development of robot-based warfare has been a great asset to the U.S. military. But although the world leader today in military robots, the U.S. cannot rest on its accomplishments.

“In technology, there is no long-term, first-mover advantage,” Singer cautioned. “The British and the French invented the tank in World War I, but the Germans learned how to use it right.” The profoundest risk is that some enemy force discovers a better way to employ robot warriors.

Up to now, the development of robot-based warfare has been a great asset to the U.S. military. But although the world leader today in military robots, the U.S. cannot rest on its accomplishments.