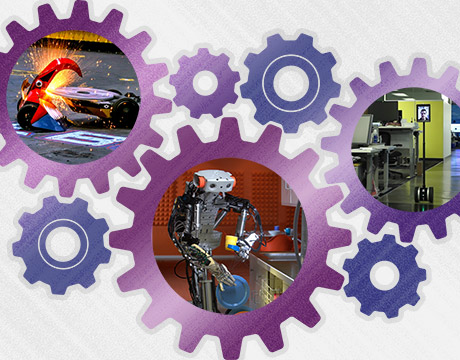 For 16 years Icewave has ripped, hacked apart, torn limbs, and otherwise mangled the likes of Razorback, Chomp, and Ghost Raptor.

The destruction has taken place on the television program BattleBots, a show that features robots going at it gladiator style. BattleBots aired for two years beginning in 2000 (and has seen two revivals, the most recent in May 2018) and has brought countless kids to engineering. Some of those competitors have taken what they’ve learned from creating the most hellish bot possible, and created successful careers and companies.

“I saw BattleBots on Comedy Central in high school and like most technically oriented kids I thought it was the coolest thing ever,” he said. “I wanted to build one of these things, and I wanted to know how to do it.”

DeVidts reached out to robot builders who posted build logs in the early days of the internet. Before long he was competing on the show. His creation is essentially a spinning blade powered by a combustion engine. It fought its way to the top of 600 wrecking robots, takingfirst place at one of the BattleBots IQ college competitions."

After that, the show went off the air. But the roboticists who participated kept building.

“Builders across the country wanted to keep doing this” said DeVidts. “People started having their own arenas.” To help the burgeoning community continue their skirmishes, Devidts created the Builders Database as well as other software to assist robot builders interested in running events. “The next thing I know, people are flying me out to events to help them organize a show,” said DeVidts, who was in his senior year of high school at the time.

Along the way he became friends with David Cann, a software developer who worked for BattleBots. When the iPhone first hit the scene, DeVidtswas working for a medical supply company. Cann decided they should capitalize on the coming touch screen revolution. What they created is a plush toy that kids could interact with through the phone.

For You: Autonomous, Robotic Boat First to Sail Across the Atlantic While trying to get the toy produced in China, the pair wished they had a robot of a different kind—not for fighting or for playing, but for remote communication. They found just what they were looking for—a screen and camera on wheels—from a company called Anybots. “We said, let’s get one of these things. Wait . . . hold on . . . it’s $15,000,” said DeVidts. At the time they were each paying $1000 to rent a 13-square-foot shop in Miami. The Anybot bot was well out of their price range.

During that time, the second generation iPad was released. While trying to sell the robot they’d created, DeVidts and Cann discovered that the toy market to be incredibly cut throat, with low profit margins. So they put their skills and money into creating an iPad driven telecommunications robot.

“The prototype was a golf caddy that a friend had found,” DeVidts said. “We put an Arduino in there, and put the iPad on the part where you put your score.” The YouTube video of the robot driving around got a lot of buzz . . . enough that someone at BMW saw it and called the duo—now Double Robotics—asking if they could make them a few.

Eventually they took their idea to Y Combinator, a startup accelerator that has funded the likes of Airbnb, Dropbox, and Reddit. Trevor Blackwell, one of the Y Combinator cofounders, also happened to be the creator of Anybots. “We said, there’s no way they would accept this,” said DeVidts, who submitted, the robot anyway. Blackwell said it’s an amazing idea, something he would have done if he had started today.

Now there are 10,000 Double Robotics bots roaming factories and offices.

DeVidts had to put his BattleBot knowledge to use to get this far with his company.

“When you build Battlebots for 10 years of your life you become very good at building products that take abuse,” said DeVidts. “The number one thing is iteration. With Icewave we’ve been fortunate to not get completely destroyed—we’re using the same design year after year.” Other skills learned from the world of robot combat have less importance for an office robot, like covering holes with foil tape to protect its innards from the likes of a flame thrower.

Aside from a few years in college studying computer science, DeVidts has no formal training as an engineer. But passion leads to knowledge. For DeVidts, having a portfolio of the work he’s done has helped him as much as a degree.

“There’s never been a better time for being able to show the things you can make instead of having that piece of paper,” said DeVidts. “The advent of Youtube and social media—all it takes is building something cool and showing it to the world to get you anywhere you need to be.”

Read More: The Upswing of Innovation Mechanical Engineer Salaries Rise How to Decide to Fight a Forest Fire or Let it Burn

For Further Discussion
I saw BattleBots on Comedy Central in high school and like most technically oriented kids I thought it was the coolest thing ever.Marc DeVidts, co-founder and CTO of Double Robotics