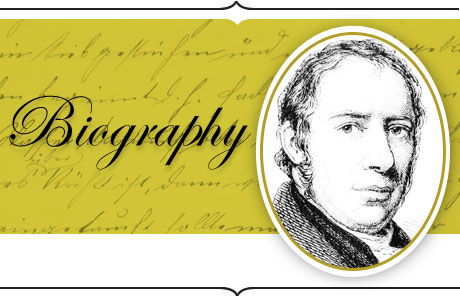 A controversial and somewhat tragic figure, Richard Trevithick (1771 – 1833) is credited with inventing the first high-pressure steam engine and the first operational steam locomotive at the turn of the 19th century.

Trevithick was born in the mining district of Cornwall, England in 1771. The youngest of six children, Trevithick demonstrated very little interest in school and was characterized by his schoolmaster as being "disobedient, slow and obstinate." He went to work at Wheal Treasury mine where his father was a mining manager. He developed an aptitude for math and engineering and was employed as a consulting engineer at the age of 19. By then, he had grown to 6 ft. 2 in. tall and became known as the "Cornish Giant."

With his work in the mines, he learned of the importance of the steam engine for pumping and hoisting the ore from the mine. Because Cornwall had no coalfields, it was expensive to import the coal required for the steam engine and it was important that the engine operated efficiently. Trevithick focused on improving the efficiency of the extremely large, low pressure steam engine invented by James Watt. Trevithick thought that utilizing steam at high pressures would enable the engines to be made much more compact and more efficient. Watt opined that utilization of high pressure steam was too dangerous to be practical.

Trevithick was promoted to engineer of the Ding Dong mine at Penzance. In 1797, he developed a successful high-pressure engine that was soon in great demand in Cornwall and South Wales for raising the ore and refuse from mines. His compact engines could be transported in an ordinary farm wagon to the Cornish mines, where they became known as "puffer whims" because they vented their steam into the atmosphere.

Trevithick's interests soon turned to designing high-pressure steam engines to power locomotives. On Christmas Eve in 1801, he unveiled his first high-pressure steam locomotive and took seven friends on a short journey. Known as the "Puffing Devil," the locomotive was able to keep up the steam pressure for short journeys. Three years later, Trevithick produced the world's first steam engine to run successfully on rails, which he believed would be more effective than horse drawn wagons pulling the heavy loads of coal and iron to and from the mines. The locomotive was capable of hauling ten tons of iron, 70 passengers, and five wagons from the ironworks at Penydarren to the Merthyr-Cardiff Canal. The locomotive reached speeds of nearly five miles an hour over the nine mile journey, which was completed in 4 hours and 5 minutes. The Penydarren locomotive was designed so that the exhaust steam was turned up the chimney, which produced a draft that drew the hot gases from the fire more powerfully through the boiler, a novel engineering principle vital to the success of the high-pressure engine.

Trevithick returned to Cornwall and developed a new locomotive he called Catch Me Who Can. In the summer of 1808, he erected a circular railway in Euston Square and charged a one shilling fee for a ride. Unfortunately for Trevithick, his inventions were a bit ahead of their time as the cast-iron rails were not strong enough to support the weight of his locomotives and kept breaking. It was several years before steam locomotion became commercially viable.

While abandoning any future development in locomotives, he adapted his high-pressure engine to drive an iron-rolling mill and propelling a barge with the aid of paddle wheels. His engine was also used to power the world's first steam dredging machine. He continued to experiment but found it difficult to find financial backing and make money from his inventions. In 1816, he accepted an offer to work as an engineer in a silver mine in Peru. He spent a decade travelling and working in South America, but returned to England penniless in 1827. In February 1828, the House of Commons rejected a petition suggesting that he should receive a government pension. Trevithick died in extreme poverty in Dartford, England, on April 22, 1833.

In a note to fellow engineer, Davies Gilbert, Trevithick wrote: "I have been branded with folly and madness for attempting what the world calls impossibilities, and even from the great engineer, the late Mr. James Watt, who said to an eminent scientific character still living, that I deserved hanging for bringing into use the high-pressure engine. This so far has been my reward from the public; but should this be all, I shall be satisfied by the great secret pleasure and laudable pride that I feel in my own breast from having been the instrument of bringing forward and maturing new principles and new arrangements of boundless value to my country. However much I may be straitened in pecunary circumstances, the great honour of being a useful subject can never be taken from me, which to me far exceeds riches."

Richard Trevithick is credited with inventing the first high-pressure steam engine and the first operational steam locomotive at the turn of the 19th century.