Return of the Harmonic Analyzer

Return of the Harmonic Analyzer 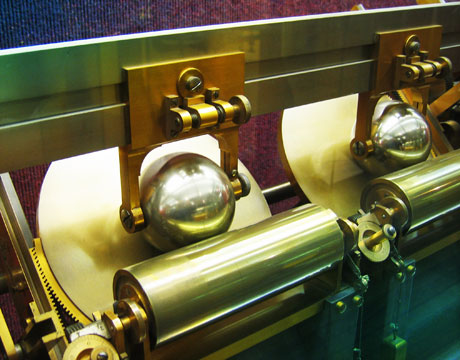 In the late 19th century Michelson performed Fourier analysis by hand to help resolve fine details of the light-emitted by vaporized elements, essentially an early version of Fourier transform spectroscopy. The hand calculations were laborious, so he invented the Harmonic Analyzer to automate his calculations.

Michelson commercialized the design and a few were sold. One of the production models has sat for decades in a glass case in Altgeld Hall at the University of Illinois at Urbana-Champaign. Bill Hammack, a professor in the department of chemical engineering, and Bruce Carpenter, associate director of the math department’s distance learning program, NetMath, tracked it down.

They and a third associate, Steve Kranz, an engineering research assistant at the university, saw the machine as a visual means to demonstrate Fourier methods to students. Together, the three created a video series and a book that deliver a close-up look at the machine. The book, Albert Michelson’s Harmonic Analyzer: A Visual Tour of a Nineteenth Century Machine That Performs Fourier Analysis, is available as a free download.

The video, which shows a replica of the original machine in operation, is on YouTube. The Harmonic Analyzer adds cosines to create intricate patterns. It also does the inverse operation: it can take a pattern and reduce it to its cosines. This operation, known as Fourier analysis, is a method of defining periodic waveforms in terms of trigonometric functions.

The method is named for the French mathematician and physicist Jean Baptiste Joseph, Baron de Fourier, and developed from his original work, known as the Fourier series. According to Hammack, the applications are essential to many modern developments. Compression methods used for digital sound and image files, for instance, rely on Fourier analysis; signals in cell phones are filtered using Fourier methods.

Gaertner’s 1904 catalog advertised a machine that could add up to 20 sinusoids and a larger version that calculated with 80 sinusoids. According to Hammack, Gaertner sold at least four machines at around $225 each.

Hammack said he found scattered references to the Harmonic Analyzer in popular science magazines, mostly from press releases that may have come from the University of Chicago, where Michelson taught physics. The machine, he said, is also mentioned in An Introduction to the Mathematical Theory of Heat Conduction, a 1913 text by Leonard Ingersoll and Otto Zobel.

The Harmonic Analyzer made a public appearance in an improved form at the 1933 World’s Fair in the Great Hall of Science. Hammack said he is not sure when the Harmonic Analyzer arrived at the University of Illinois. It is a 20-element model and has been on display for at least four decades, and its gears have been “completely still,” he said.

After spending a great deal of time with the machine, Hammack finds the stillness a bit sad: the ingenious machine sits behind glass, never used.