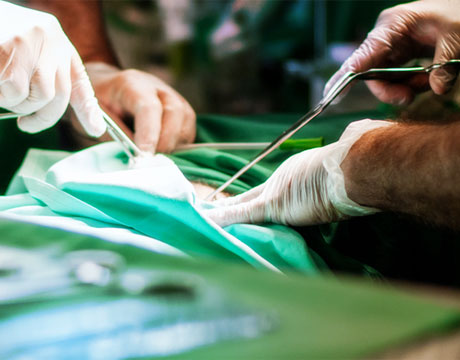 Relieving the Ordeal of Surgery

Surgery can be an ordeal. There’s the preparation, the cost, and then the long hours that can come with rehab. And often, after all of this, the patient learns they have an infection and will have to do go through the grueling steps of the surgery all over again. Now that’s a whole different definition of ordeal.

Prof. Eric Ledet leads a project at Rensselaer Polytechnic Institute involving sensors to try to help with the frustrating issue of infection.

“Infections are difficult to eradicate once they are established, because implants make a breeding ground,” Ledet explains. “It’s a great surface for bacteria to adhere and, once it adheres, it makes biofilm that’s almost impossible to get rid of. What normally happens is they remove the implant and leave them without one until the infection is gone and then put a fresh one in. The value of this is if we can do early detection of an SSI [surgical site infection] then we can eliminate the bacteria from making bioform and the infection becomes much easier to eradicate through antibiotics. We hope to help people to not go through multiple surgeries.”

For about 15 years, Ledet, associate professor in the department of biomedical engineering, has been striving in the area of orthopedic work. “We’ve been focused on getting information from implants and we were interested in the biomechanics of orthopedic implants and what happens after it goes in. So we’re looking for ways to do those measurements,” he says. “The way our sensors work is they measure very small changes in their own deformation.”

In the course of their research, they found a hydrogel that is sensitive to bacteria, and sensitive to the antigens found in the bacteria. The real breakthrough will come in measuring the swelling of this bacteria via sensor.

“As far as testing, we made up some of the hydrogel first to see if it would work and we’re in the process of going through the steps right now,” he says. “We use a chemical that’s a surrogate for the antigen and we’re formulating hydrogels. It’s about optimizing when it comes to a peptide.” Of course, if all goes well, there would be much more testing, including getting to the implanting in vivo stage.

The most daunting task may be getting to the clinical stage, he says. “There is a challenge to using something small and inexpensive and [we need] a sensor that will be sensitive enough to infections at clinical levels,” he says. “A lab can measure but you just need those clinically relevant levels.”

If they are successful, it would be a moment to savor, he says. “This is rewarding research to have a clinical target for this,” he says. “You want to work on something translational and see the benefit for those dealing with this kind of pain.”

For Further Discussion
This is rewarding research to have a clinical target for this. You want to work on something translational and see the benefit for those dealing with this kind of pain.Prof. Eric Ledet, Rensselaer Polytechnic Institute