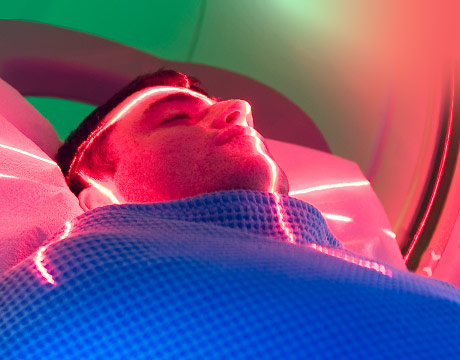 You might say that Tommy Vaughan’s career is the recent history of magnetic resonance systems. As a young engineer in the early 1980s, Vaughan, who last year became the first director of magnetic resonance research at Columbia University, began working in a field that many thought would never have a clinical application.

But history quickly proved the doubters wrong. MRI scans are often more informative than those from other types of medical imaging technologies because of the high resolution of images detecting the tiniest abnormalities or changes, particularly in soft tissues, such as the brain. In simple terms, the MRI system uses a large, strong magnet and radio waves to send signals to the body and receives information back that can be converted into computer images of organs and other internal body structures.

A pioneer and internationally recognized leader in the field holding more than 40 patents, Vaughan has designed key technology found in some of the most powerful MR systems. Since the stronger the magnet, the better the image, until now, his general career theme has been advancing the field by moving to higher and higher field strengths, the most recent a 10.5T magnet field strength (measured in Teslas), that is awaiting approval for use on humans.

Now his top priority is by the end of next year building an MR research center that brings together magnetic resonance research and work at three Columbia entities: Biomedical Engineering; Mind Brain Behavior Institute; and the Columbia University Medical Center. Vaughan said he joined Columbia because of the opportunity to build a new MR center at a place that is very rich in talent both in basic science and in clinical translation of the research that he does.

“Fundamentally I think of myself as a tool builder, and I am always looking for good tool users,” he says. “Together we make a team. So it is a fertile field for me, and Columbia had relatively little in terms of MR.”

Plus, it’s an area that Columbia wants to develop.

“That seemed a powerful combination and perfect place for me to build a new center,” Vaughan says. The School of Engineering on the main campus will host the engineering work; the Mind Brain Institute will host neuroscience; and Columbia Medical center will host the translational center.”

A second priority (one he calls a pet project begun during his previous position directing the magnetic resonance research program at the University of Minnesota) is the continuation of work on developing a portable MR system that will be feasible and affordable for the 90 percent of the world’s population that has no access to MRIs.

The idea of a portable system, not dependent on a modern power grid or other infrastructure, was partly ignited by a DARPA request for proposals a couple of years ago to build an MRI system that you could push out of a helicopter on a parachute over a battlefield to do imaging within minutes, Vaughan says. The project never got off the ground, but, “That crazy idea got our creative juices flowing. There’s nothing like an absolutely crazy idea with the potential of a [$20 to $40 million] grant behind it. That makes you put down what you are doing and start dreaming.”

“[We] had developed thinking along the lines of what if we applied a new kind of magnet to image brains specifically for neuroscience – observing their function and how they work,” he says of himself and his collaborators. It’s essentially re-inventing magnetic resonance all over again, he says.

“We got to this state of our career where it is increasingly difficult to incrementally increase the field strength with the magnets without the technologies to build new kinds of magnets. We think we can make a magnet small enough to fit on top of someone’s shoulders on their head to study, for example, motor control,” he says, describing the device as looking much like old-fashioned helmet-style hair dryers.

Perhaps with the same ultra-portable, ultra-compact magnet and a laptop with a link to the cloud as the console, MRI could be delivered to the rest of the world, he says.

Looking back, Vaughan says, “It’s been a really exciting field. I entered it when it was at the very beginning at least with applications to human medicine. I have been able to stay at the forefront. I’ve grown up with a new field and a new crop of scientist engineers. We’ve produced something of significance.”

What he finds especially exciting is “looking at nano data for the very first time that no one has ever seen before. It’s like seeing a new valley from a mountain; looking at stars through a telescope. The really fun thing about developing new tools like more and more powerful instruments is I am always the first to see what they can do. Then we turn it over to applications scientists, but I am the first to see.”

For Further Discussion
The really fun thing about developing new tools like more and more powerful instruments is I am always the first to see what they can do.Prof. Tommy Vaughan, Columbia University