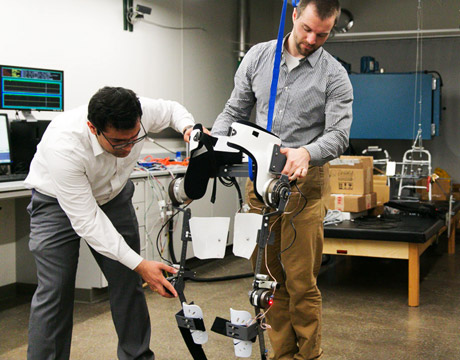 Prof. Nitin Sharma (left) and his colleagues are developing an exoskeleton that utilizes ultrasound sensors for measuring fatigue. Image: University of Pittsburgh

Assistant professor of mechanical engineering and materials science Nitin Sharma of the University of Pittsburgh is part of a team working with robotic exoskeletons to assist with a common problem that hasn’t received much attention: the fatigue experienced by users of traditional exoskeletons. And he hopes a recent National Science Foundation monetary award will help his team achieve their goal of solving that problem.

The group developed an ultrasound sensor system, which lies at the heart of their hybrid exoskeleton. The exoskeleton relies on both electrical nerve stimulation and external motors.

Ultrasound is used to take measurements of muscles and create a model for muscle fatigue through the signals it receives. “We need to know how to coordinate the information and the ultrasound, which will give us information on when to go from electromyography to functional electrical stimulation [of the muscles],” says Sharma, who is also director of the Project Neuromuscular Control and Robotics Laboratory.

Electromyography is the traditional way of sensing muscle signals, Sharma explains, and it is not entirely adequate. “Let’s say you make muscle movement or limb movement where muscles are contracting. The muscles are activated by neurosignals. You can listen to these signals at the skin level and there’s combined manifestation of all muscle signals. This is where you get information when it comes to muscle mass fatigue.”

But Sharma decided to combine electromyography with an ultrasound component several years ago when he was looking at designing control systems. “I came in contact with Kang Kim in the school of medicine [at University of Pittsburgh], and he made it clear. They were using ultrasound and correlating ultrasound signals with muscle fatigue. This was huge.”

Part of the problem with electromyography is the signals are weak and have a very low signal to noise ratio. “There are advantages to it but you can’t get around the fact that you have a lot of crosstalk,” he says.

The hope is that using ultrasound, which supplies image-based, real-time image sensing, the exoskeleton will better sense fatigue and will know when to switch from joint actuators to electrical stimulation of the muscles themselves, something that has been difficult to determine to this point.

The work is in the early stages but the results to this point have been positive, and Sharma knows there are many people who could benefit if they succeed. “This exoskeleton work has been going on for a long time and it shows how you sometimes have to divide work up into parts, some that will take years, to reach the ultimate goal,” he says. “Hopefully people will get back more independence if we can see this to the end.”

For Further Discussion
Hopefully people will get back more independence if we can see this to the end.Prof. Netin Sharma, University of Pittsburgh