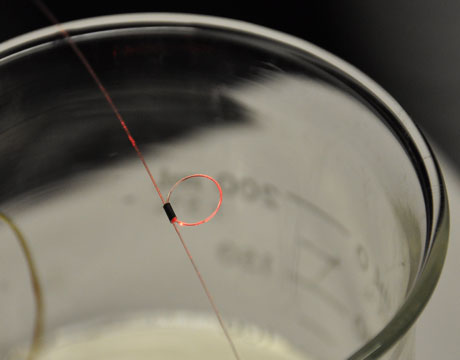 A loop in the single mode optical fiber illuminated due to the losses from the curved section. Image: Nikhil Gupta

Extensometers have been used for decades to find defects in material and were always fascinating to Nikhil Gupta, associate professor in the department of mechanical and aerospace engineering at New York University, mainly for their use in the field of aircraft safety. Now he has conceived and designed his own fiber-optic extensometer.

“When you look at it in terms of new aircraft made of composite material and already reinforced with fibers, a thought that comes to mind is, ‘If you can replace existing instruments with instruments that utilize optical fiber and can look at the stress data, it can be a big help,’” he says. “But there are other applications, such as pressure sensors inside fuel tanks to measure the pressure or level of fuel. Think about if you’re using electrical sensors. Once you have electricity, you can run into wire, and you could possibly have a spark if electrical sensors are used inside a fuel tank.”

Cost has been an issue when it comes to extensometers as well. Gupta says right now it would set someone back at least $8,000-$10,000 for an extensometer but that this creation should cost under $1,000. “And remember that optical fiber is about $1 per yard,” he says. “This kind of low-cost extensometer can change things.”

However, Gupta’s device actually came out of another focus of his. “I was working on a different sensor that can measure one nanometer of force or one nanometer of displacement directly but with sensitivity there were losses and lots of different origins of noise." Gupta says that there are two types of optical fiber: one is a multi mode fiber and one is a single mode fiber. “They are used extensively in optical fiber communication,” he says. “What we do is take the single mode optical fiber. If it’s running in a straight line then there is no loss of signal from that fiber at all. Now, when you are talking about a small loop then there are losses that can be measured. We can actually measure better than one micron displacement.” The first thing to prove was whether the concept was repeatable and this required a great deal of testing with compression. “You want it to work for a number of different cycles. You’re not just working for one measurement,” he says. “Think about the variety: tension is one, compression is another. There is a lot of work involved in sticking to the surface of a metal plate and bending the plate and seeing if it still is stable or not.”

The next step involves a single fiber. Gupta doesn’t want to create just one loop but a number of loops and that involves placing them in different locations and seeing if they can still measure aspects such as displacement of the sensor. A benefit is the instrument will have one laser source, he says.

“One hope is that this can be a commercialized success in the oil and gas industry because it’s a vigorous environment,” he says. “But it even has possibilities in the biomedical industry as we have done experiments involving leg muscles. It will be interesting to see all the directions it could take.”

For Further Discussion
It will be interesting to see all the directions it could take.Prof. Nikhil Gupta, New York University