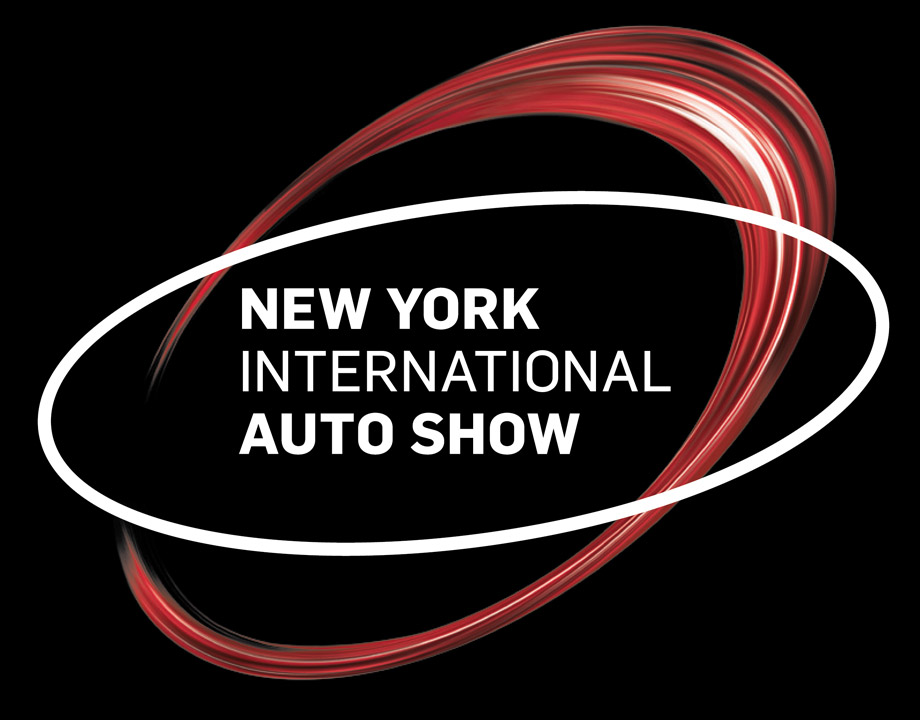 Ready for the Electric Car Revolution?

The electric vehicle (EV) market continues to expand, and car companies are taking notice. According to EV-Volumes in 2018, 358,000 EVs were sold in the U.S. The federal government and several states in the U.S. now offer financial incentives to help drive the automotive market toward EVs. The current tax credit offer from the IRS ranges from $2,500 to $7,500 per new EV purchased, a hefty sum for those looking to buy a new car. As reported by Statista, 41 percent of the consumer market believe these incentives are just the right amount to help them purchase an EV. In response, several car manufacturers have released new hybrid or full EV models for 2019, and with states like California, projecting an electric vehicle fleet of over 3 million by 2030, now might be the best time to invest into an electric car. We visited the NY Auto Show this past spring, and here are some of our favorite EV vehicles coming soon to a dealership near you. 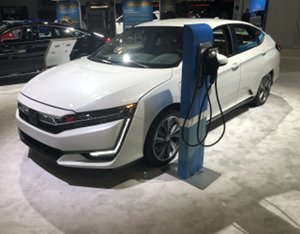 The new Honda Clarity is an all-electric vehicle that can reach 89 miles on a single charge. The vehicle charges the battery in two ways. Standard electric charging can be done at home or any public charging station. It supports level 1 charging, which is plugging it into a standard 120-volt household outlet, and level 2 charging, also known as DC Fast Charging. That requires a 240-volt charger, available at stations throughout California and Oregon. Level 1 charging takes up to 19 hours for a full charge from zero percent. Level 2 DC Fast Charging can charge the vehicle up to 80 percent in about 30 minutes. The car implements different smart systems like energy-smart climate control, efficient heat pump, and an eco-driving mode to help maximize battery life. Currently, the vehicle is only available in Oregon and California and is available for lease starting $199 a month for 36 months. 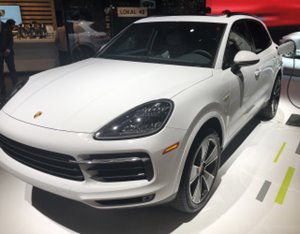 Porsche improved the Cayenne’s E-Hybrid performance from its previous model by enhancing the hybrid strategy. Inspired by the 918 Spyder super sports car, the hybrid vehicle combines a 335-horsepower (hp), 3.0-liter V6 engine with a 134-hp electric motor. The combined maximum torque is 516 pound-foot (lb-ft), and the car can go from 0 to 60 miles per hour (mph) in 4.7 seconds. The new electric battery for the electric motor has 30 percent more capacity than its predecessor, increasing electric performance by 43 percent. The car has a 27-mile range operating solely on battery power with a top speed of 83 mph. The vehicle will have a base MSRP of $79,900. 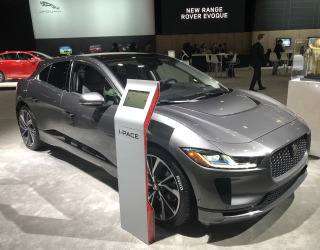 The fully electric Jaguar I-Pace offers all-wheel drive from twin electric motors, offering a combined 394 hp and 0 to 60 mph in 4.8 seconds. The synchronous permanent magnet motors are light and efficient. They are positioned on each axle and packaged concentrically with the single-speed transmission. The 90 kilowatt-hours (kWh) lithium-ion battery offers a driving range of 292 miles. The FAST DC charging can charge the battery to 80 percent in 40 minutes. The car uses regenerative braking to help charge the battery while driving. The I-Pace has a high regenerative mode that uses single pedal driving. When the driver lifts their foot off the accelerator, the vehicle slows down considerably, almost as if you had used the brake to decelerate the car. Regenerative braking can produce up to 0.4G of braking force. The base MSRP starts at $69,500. 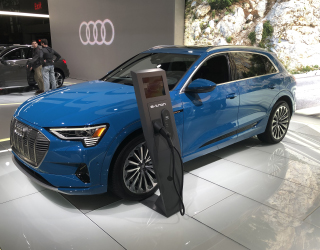 Audi’s e-tron steps into the large class size of EVs. It is a fully electric luxury SUV with 355 hp and an estimated driving range of 204 miles. The car features a boost mode which provides an increased performance output of 402 hp, able to reach 60 mph in 5.5 seconds. The car has level 2 fast charging, and a 30-minute charge will provide a range of 163 miles, which is 80 percent battery capacity. The battery is designed only to use 88 percent, or 83.6 kWh, of its 95-kWh battery capacity to increase battery life. The e-tron comes equipped with integrated smart and enhanced display features. The driver will be able to see an augmented cockpit display right behind the steering wheel with charging, battery, route, and infotainment information. The car also has Amazon’s Alexa fully integrated into the car for voice commands. The e-tron starts at $74,800. 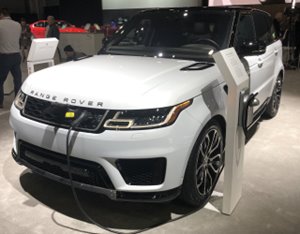 The Ranger Rover Sport Plug-in Hybrid Electric Vehicle (PHEV) is one of the first electric models produced by Land Rover. The combination of the gas engine and the electric motor produces an output of 398 hp and reaches 0 to 60 mph in 6.3 seconds. The car drives automatically in Parallel Hybrid mode, combining gas and electric drive to optimize the battery charge or fuel economy. In fully electric mode, the car has a range of 31 miles, used mainly for short commutes. The car has a level 1 charging capability and can be charged fully within 2.75 hours. The base MSRP starts at $79,000. 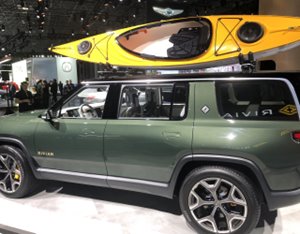 The Rivian EVs stole the show at this year’s NY Autoshow. Making its East Coast debut, Rivian unveiled two off-road vehicles: the R1T Truck and R1S SUV (the SUV is shown here). Both models are fully electric, have autonomous drive functionality, and designed to travel off-road in harsh environments. Each wheel can deliver 200 horsepower and provide enough torque (14,000 Nm) to tackle any terrain. The top of the line model has a 180-kWh battery and can deliver a 400-mile range. The company is currently taking pre-orders, with vehicles expected to be delivered by 2020. The R1T Truck has a starting MSRP of $69,000, and the R1S SUV starts at $72,500.

The New York Concept from Genesis 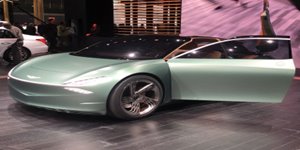 Of course, besides the traditional sedans and SUVs, there was a line up of concept EVs at the NY Autoshow. The New York Concept, developed by Genesis, focuses on EV luxury. The new EV is designed to be sporty and agile, with a hybrid engine rated at 241 hp with 8-speed automatic transmission. The innovative concept design of the interior merges the instrumentation cluster and center stack into one curved horizontal display. The display has a 4K resolution and is 21 inches in length. The driver can interact with the touch screen using single or multi-touch finger swipes, and content can be allocated to different sections of the screen, much like browser windows on a desktop computer. 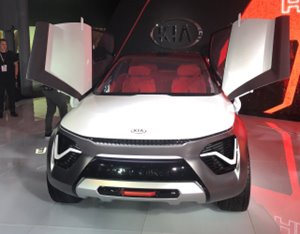 The HabaNiro is a new, fully electric, all-wheel drive, four-seat concept car from Kia. The car will offer plenty of futuristic technology features such as level 5 autonomous driving mode. Level 5 is full automation, requiring no human interaction, operating on any road and under any conditions. The compact crossover vehicle will have a driving range of 300 miles supplied by two electric motors. The car also has an interactive Real-Time Emotion Adaptive Driving (READ) system, which can optimize and personalize the driver and passenger’s experience via an artificial intelligence based bio-signal recognition technology. The system can follow a driver’s eye, interpret their body language for comfort, or change the music by observing the passengers interaction with the song. The READ system had its software debut at the Consumer Electronics Show earlier this year. 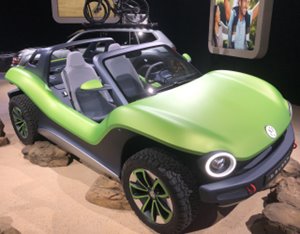 The California dune buggies of the 1960s have returned in the form the Volkswagen ID. Buggy. The concept car features a minimalistic design with no roof or doors. The interior is completely weatherproof for off-road adventures. The vehicle will have Volkswagen’s modular electric drive matrix, integrating a 62-kWh lithium-ion battery into the floor and offers a 201-hp electric motor. The expected driving range is 155 miles and a maximum torque of 228 lb-ft from a standstill. Even off-road, the vehicle will provide enough power to rear axle to ensure 0 to 62 mph in 7.2 seconds. The concept car can also be fitted with a second electric motor on the front axle, turning it into a four-wheel drive vehicle, and an electric prop shaft distributes the power between the front and rear axles.