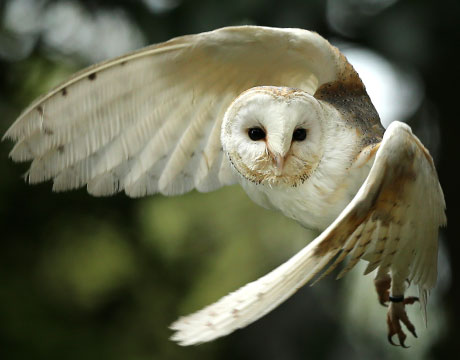 Quiet as an Owl

Owls, particularly barn owls, are alone among birds in being almost completely silent in both gliding and flapping flight.

“From an engineer’s perspective, the owl’s silent flight shouldn’t be possible,” says William Devenport, a professor of aerospace and ocean engineering at Virginia Tech. “Because, if you look at the owl wing, it’s covered in edges, and each of those edges should radiate noise.”

So far, Sharma and his team have been investigating the first two features to determine how they affect noise.

The team has done numerical simulation to investigate every part of the flow field over the front end of the wing to understand what’s going on in time and space.

“The leading [edge] is not straight, it’s jagged to reduce unsteady lift at leading edge, which is somewhat akin to how supersonic flight uses a delta [triangle-shaped] wing,” Sharma says.

To understand that, think of air turbulence as blobs of cohesive structures. “One blob will hit one portion of the wing and the jagged structure breaks it apart, breaks it off up from the rest of the blobs,” he says.

This breaks up the pressure of the airflow, and the noise it causes.

Sharma’s team is working with Virginia Tech researchers to understand the role the hairs on the wings play in quieting noise. The hairs initially rise almost perpendicular to the feather surface but then bend over in the flow direction to form the canopy with interlocking barbs at the their tops.

The hairs aid in reducing trailing noise. When a blade like the ones on a wind turbine slices through the air, the sharp edge at the back of the blade converts the air’s turbulence into sound waves, Sharma says. Virginia Tech researchers found the canopy of the owl wing’s surface pushes off the noisy flow.

“The impact of hairs and the canopy is to take the blobs and move them away from the wing’s surface; then, the noise production mechanism weakens,” he says. “Unsteady pressure depends how close turbulence is to surface and trailing edge; you want to get the eddies to be moved away from the trailing edge.”

After Virginia Tech researchers simulated and optimized the canopy structure, they created a 3D-printed, plastic attachment consisting of small finlets that can be attached to blades, such as those within airplane engines or the rotating blades of wind turbines.

The finlet invention may be retrofitted to an existing blade and wing designs and used in conjunction with other noise-reduction strategies to achieve even greater noise suppression, Sharma says.

“The add-ones could be useful in wind turbines,” he says. “They seem silent, but even the small amount of noise they make in quiet surroundings becomes source of annoyance."

Local laws make it difficult for manufacturer to place turbines unless they have means to reduce noise, Sharma adds. Researchers continue to study the back part of the owl wings to find even more methods to quiet all types of fan blades and airplane wings.

Just imagine, one day you’ll be watching a plane land and may not even hear the jet engine. Or you’ll hike through an area with wind turbines and not hear that eerie hum. That’s something that might be worth listening for. Jean Thilmany is an independent writer.

For Further Discussion
From an engineer’s perspective, the owl’s silent flight shouldn’t be possible. Because, if you look at the owl wing, it’s covered in edges, and each of those edges should radiate noise. Prof. William Devenport, Virginia Tech.