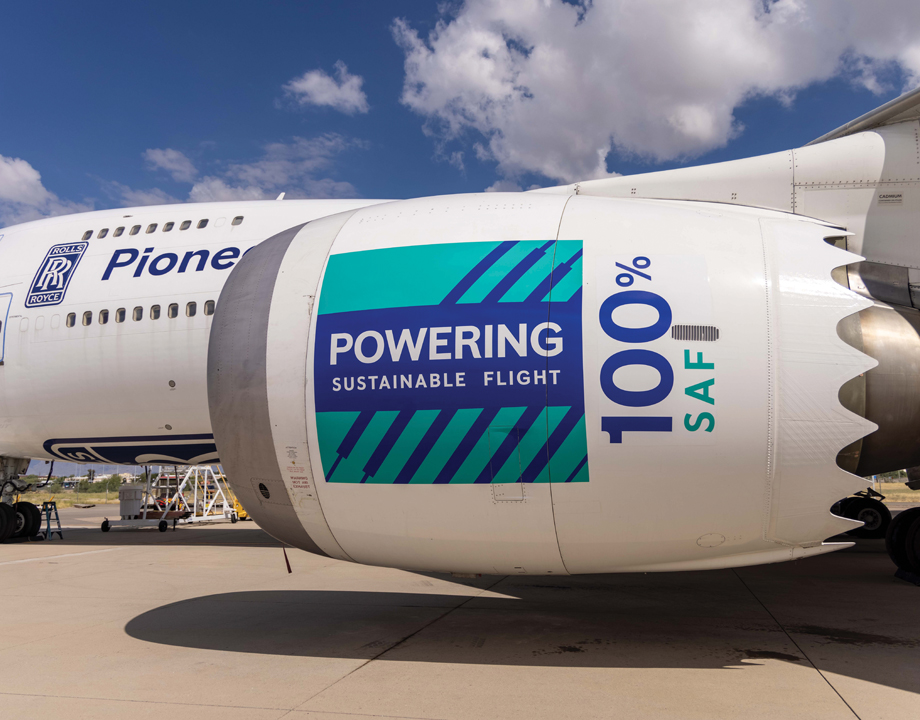 Futuristic, zero-emissions aircraft are decades away, but some steps can reduce the industry’s climate impact much faster.

Aerospace Air Transportation
Aviation is large source of carbon emissions in the transportation sector. Researchers and entrepreneurs are developing alternatives to petroleum-derived jet fuel, with a lot of effort being directed toward hybrid-electric power, hydrogen, or so-called sustainable jet fuel (SAF) made from vegetable matter. No matter which alternative ultimately wins out, there will be a decade or more of a transition, which means we’ll be flying conventional jets using conventional fuel for some time.

But that doesn’t have to mean we’re stuck with the same level of emissions.

“Whether you use SAFs or hybrids or hydrogen, at the end of the day all three of those solutions are going to require the gas turbine in the heart of it, so that means we absolutely need to continue to work on having highly efficient gas turbines,” said Karen Thole, University Distinguished Professor in the department of mechanical engineering at Pennsylvania State University.

That means one thing the aviation industry can do to reduce emissions is to keep doing what it has been doing: continuing to advance the efficiency of jet engines. Manufacturers such as GE Aviation and Pratt and Whitney are developing new gas turbines that can go farther on a gallon of fuel, whether it is the conventional kerosene-based jet-fuel, SAFs, or a mixture of both.

“When we look to the future—2020, 2040, 2050—we see airplanes powered by gas turbines,” said Sean Bradshaw, the technical fellow for sustainable propulsion at Pratt and Whitney. “We still think that the gas turbine has quite a bit of runway. There’s more to do, still more potential to be realized.”

While Pratt and Whitney and companies like it are putting resources into hydrogen, electric, and SAF-powered flight, they’re keeping their focus on continued improvements to jet engines as we know them. Pratt is currently working to increase the bypass ratio on their engines, improve aerodynamics, and develop cooling materials and technology so their engines can run hotter.

As Bradshaw points out, with fuel burn 25 percent of an airline’s operating cost, they have the financial motivation to increase efficiency. And any increase in efficiency now will have an impact on the efficiency of whatever fuel source we’re using in the future. Those numbers aren’t small: between 1968 and 2014 the fuel burn of commercial flights fell by 45 percent.

“If you track the development of gas turbines, you can see about a .4 increase in efficiency per year,” Thole said. “These gains don’t happen overnight. They do happen with a lot of work.”

The rate of improvement could increase more quickly with a few changes in how important parts are prototyped. “Right now, there are fewer countries in the world that can make a cooled gas turbine blade than can make a nuclear weapon,” Thole said. It can take years to cast a set of acceptable blades with a production rate of roughly one in 15 blades being acceptable.

With the increased use of additive prototyping, a set of blades could be made in months. A faster production of development blades would mean advancing turbine technologies faster, leading to higher turbine efficiencies.

Another step that could eliminate a large chunk of the climate impact of aviation—and which could be implemented tomorrow—is contrail avoidance. Contrails occur at high altitude, in five percent to 10 percent of flights. But it’s no mystery which flights. In cold, damp air, water freezes into the long cirrus clouds that streak our skies. They might look pretty as they form behind aircraft crossing overhead, but they’re a major contributor to global warming.

“They trap outgoing heat and reflect incoming light,” said Steve Barrett, a professor of aeronautics and astronautics at the Massachusetts Institute of Technology, and the director of the university’s Laboratory for Aviation and the Environment. “The trapping wins out.”

As a result, those white streaks in the sky are responsible for as much as half of the climate impact of aviation.

Barrett’s team is using deep learning to better predict where contrails form. Then, by just rerouting flights to avoid that cold, wet air—largely by flying lower—the warming effects of flight could be chopped way down.

And unlike fixes that require retooling aircraft or remaking the aviation fuel supply chain, contrail reduction can be accomplished for the cost of just a 1 percent increase in fuel burn.

“With almost no effect on flight time,” Barrett added.

For Barrett—and for world—the answer isn’t going to be found in any single solution. “Essentially, we have to get everything to zero in incredibly short time,” he said. “We have to push all these balls up the hill as fast as possible—we can’t wait 15 years for power stations to get more efficient. The answer is a number: the cheapest way to get to a sustainable future. That’s what we need to figure out.”