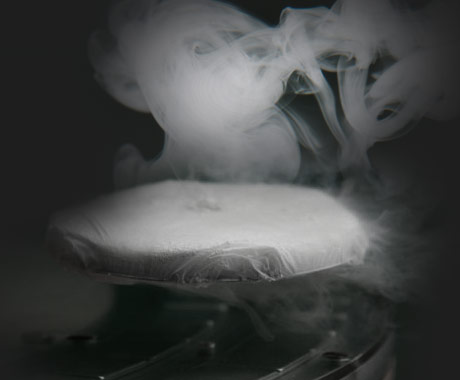 Coat a sapphire disk with a few microns of superconducting ceramic, drop it over some magnets, and watch it float. The seeming miracle is the result of "quantum trapping." That and the hard work of some researchers at Tel Aviv University.

Levitation was once relegated to the realms of mystic texts and mountain top yogis. No longer. Thanks to researchers at Tel Aviv University, Israel, objects in our time can float comfortably in the air, gliding through it friction free or hovering as motionless as a bronze cast of Saint Joseph of Cupertino.

The objects in question are no air hockey pucks, nor are they the finicky, gyroscopic magnets of yester-decade's Levitron. We're talking superconductors--high-transition temperature superconductors.

In avideo clipnow floating all over the Internet, Dr. Boaz Almog, a researcher with Tel Aviv's High Tc Superconductivity Group, can be seen placing a small disk over a magnetic track. There it remains, in whatever orientation he leaves it, centimeters away from the magnets. It does not fly off to the side, repelled by the magnetic field, nor does it skate about willy-nilly when released. When Almog adjusts the disks attitude to a rakish angle, it stays put till touched again. When hit with a flick of a finger it glides over the magnets as if friction were a property of some other universe. The disk hovers above the magnets.

To make the magic happen, Almog and his compatriots,Professor Guy Deutscher and Mishael Azoulay,coated a sapphire disk, the thickness of a business card or two, with a few microns of yttrium barium copper oxide. This ceramic goes superconductor at a mere negative 301°F. Sounds chilly, to be sure, but it's a good 100 degrees warmer than physicists thought was the limit back in the 1980s. In fact, 301 is balmy enough that a good dose of liquid nitrogen can whip the YBCO into superconductivity.

When properly cooled, superconductors do their conducting with zero resistance. They also become averse to all magnetic fields. Usually that's a deal killer for any magnet/superconductor relationship. But thanks to the thinness of Almog's disk, a magnetic field can enter it here and there in the form of "flux tubes." Where they penetrate the disk, superconductivity is locally destroyed. The magnetic field has holes in it and the superconductivity circulates around them, pinning them, and the disk, in place. The effect is strong enough that the disk can hover five centimeters above the magnets, "a world record for levitation of superconductors," says Almog. The magnetic field penetrates in the form of quantum flux tubes.

The phenomenon is made possible, in part,by the group's initial ignorance of how to grow a superconducting layer. They used a buffer between the YBCO and the sapphire that was thought to be inferior by other researchers. Though their buffer material is less compatible with YCBO than the more common buffer material, it allowed them to grow a thick, mechanically strong, and crack-free film. "It was pure accident," says Almog. "We had thisbuffer material laying in our lab and we thought, 'What the hell, let's use it.'"

Does all this mean we'll soon be commuting to work on personal quantum levitating hovercrafts? Someday. Maybe. "In principal it would be possible to levitate very heavy objects," says Almog. "If you could stretch our technology to the edge and grow tens of microns of superconductor with a one meter surface you could have a very strong levitation—you'd have to pave your road with magnets. Will it be economical? I'm not sure." What, then, does one do with a levitating superconductor? "I hoped that from this exposure, someone one would suggest an application," says Almog. "But it didn't happen."

Until someone thinks of something, the piece will remain a curio (one soon available for play in Lancaster, PA, at the North Museum of Science and Natural History. The museum bought one from Almog after he gave a demonstration there). Once again, we have to put our hovercraft dreams in suspension.

In principal it would be possible to levitate very heavy objects. Will it be economical? I’m not sure. Dr. Boaz Almog, High Tc Superconductivity Group, Tel Aviv University