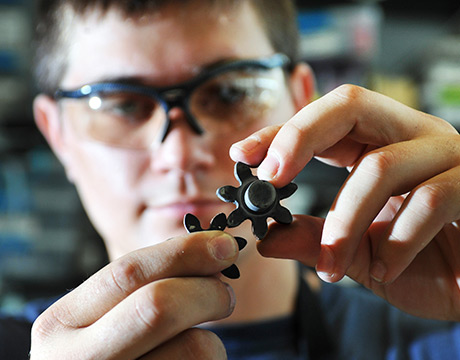 Part 1 of “Pumping Extremely Hot Metal” described the premise of a new type of ceramic pump and the applications it could serve. This part looks at the challenges the team faced in designing the pump and the solutions they used to improve design.

To create the pump, Henry had to first choose the material for its components and the heat transfer media that would flow through it.

For the media, Henry knew he had to use a liquid. Its low viscosity makes liquid easy to move and control without using a lot of energy, making it the most efficient and effective way to transfer heat. “The higher the temperature, the more useful the liquid is,” Henry says. “The problem is, what liquid to use.”

Fluids commonly used in heat transfer systems include salt, glass, and oil. But those materials have too many disadvantages - heat limitations, high viscosity, corrosiveness, low thermal conductivity and density - for the types of extreme-heat applications Henry had in mind. Molten metal, however, especially tin, performs much better in all of those areas. 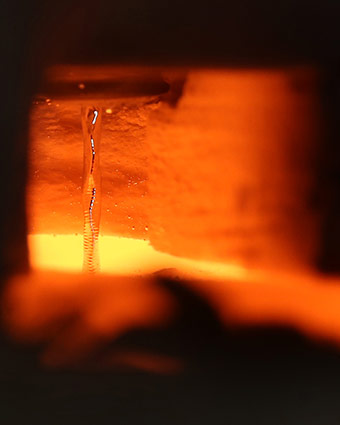 “It is low viscosity; as soon as it melts, it flows like water. And it’s electrically conductive. That’s huge because that capability doesn’t change and the electrons can move freely; the liquid connectivity is almost the same as a solid connective,” Henry says. “With metal you end up in a different regime of heat transfer. Heat transfer in liquid metal is extremely effective. You get a whole lot more heat transfer given the energy needed to move it.” Molten metals, however, can eat away at metal pipes and other components. “It’s like trying to make piping for sugar water with pipes made from sugar,” Henry says.

For You: Read the latest on fluid engineering breakthroughs from ASME.org.

That last piece helped Henry decide to build all of the components of the pump – a gear pump, in this case, for simplicity and reliability - from ceramic. Ceramics, though, are brittle. The team feared ceramic gears and other components used to pump and circulate extremely hot metal would crack and fail. But new breeds of ceramics can retain their mechanical stiffness at temperatures over 1,300 °K. After some research, Henry chose Shapal Hi-M Soft, introduced in 2012 and known for its increased machinability, mechanical strength, and thermal conductivity.

With metal you end up in a different regime of heat transfer. Heat transfer in liquid metal is extremely effective. You get a whole lot more heat transfer given the energy needed to move it.Prof. Asegun Henry, Georgia Tech

Another major design problem remained. Most pump seals are made from polymers, which vaporize under extreme heat. After about three years of trials and testing, the team finally settled on pure graphite to seal the pump, pipes, and valves. “They’re real squishy and are good up to about 3000 °C,” Henry says.

But graphite oxidizes. To prevent that, the team built a simple vacuum chamber around the pump and filled it with a “cover gas” of nitrogen. It also allowed the team to use tungsten on the outside of the seals to strengthen areas where tensile forces were applied. The chamber doesn’t greatly impact the cost of the system; it can be made from thin metal and double as a protective covering.

“When you take oxidation off the table, it opens up a range of materials you can use,” Henry says.

Not What They Expected

By the morning of the third day of testing, Henry’s students were begging to go home. Henry made them wait. He had to be sure that this version solved past problems. After 72 hours running at an average of 1,473 °K, Henry pulled the plug on the pump and declared the new design a success.“I said shut it down because it wasn’t going to break,” he says. “The students had given up before, so everyone was excited. It was a big triumph.”

Even though the pump worked, Henry is still working on future iterations. The teeth of the drive gear wore slightly, a problem Henry could solve by replacing the Shapal with a harder material such as the more expensive silicon carbide. He’s now looking for a cost-effective source. Henry will also try replacing the gear pump with a centrifugal pump to increase its speed. Then the new rounds of testing will begin. He expects to have a commercial version ready within two to three years.

“When you’re doing engineering and technical development there are different types of barriers to success,” he says. “But we had tested enough aspects to know that it would work. We knew it could be done. You can’t let the challenge or the effort be a barrier to trying again and again. If you have good ideas, you shouldn’t give up.”

Please see Part 1 of “Pumping Extremely Hot Metal” to discover the challenges Henry and his team faced in designing the pump, how they overcame those challenges, and if the new design passed the test.