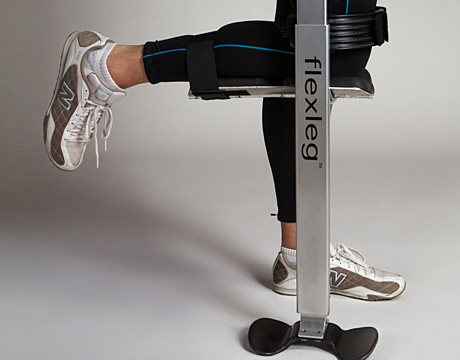 Mike Sanders’ interests in three disparate areas: entrepreneurship, mechanical engineering, and medicine, all came together one day when he glimpsed in passing a poster of a runner with a prosthetic leg.

That happened serendipitously just as Sanders was preparing to start working on a graduate degree after earning a bachelor’s degree in mechanical engineering from Brigham Young University a few years ago. Interested in entrepreneurship for as long as he can remember, Sanders was eager to capitalize on his engineering training. “I had that bug in me from the beginning,” he says, “but my undergraduate work was too intense to do anything [about it].” He did, however, make a commitment to himself to get started on something once he began graduate work. With that a goal, he collected ideas of projects to pursue all throughout his college years.

His methodical, meticulous work ethic paid off this summer with the commercial launch of FlexLeg, a hands-free prosthetic-like device that replaces the need for crutches for temporary lower leg injuries.

Engineering had won out as Sanders’ choice for a field of study over an M.D.-Ph.D. program. “I always liked to tinker,” he says, but he remained interested in medicine. The poster got him thinking about why someone who was recovering from a lower leg injury couldn’t use a device that offered more freedom than crutches, such as prostheses for amputees, and that idea went on his growing list.

Graduate school competitions provided an opportunity for Sanders to test his ideas, some even before designs were perfected. FlexLeg was one of those. Despite the accolades the idea captured, the device still needed work.

One of the biggest engineering challenges was achieving sufficient stability. Sanders’ original design put the support pylon directly below the knee as is done with expensive prostheses, but he realized that when the pylon is in this position, users may tip outward, which can cause much more harm than tipping inward. So he moved the bar to the outside of the leg.

Another change that helped stability was a redesign of the FlexLeg foot from a single point of contact with the ground to have two points of contact, the ball and the heel, similar to a human foot. “The foot [on the device] is flexible and that results in a more natural gait and pushes you toward your center of gravity with your good foot,” Sanders said.

Each prototype focused on addressing a specific issue, such as these, and by the sixth prototype, functionality from a stability perspective was working well. “[Stability] is what we do better than any other [competitive] device,” he says.

After prototype six, the device still looked like an “engineering project,” Sanders says. “It wasn’t pretty, and it wasn’t manufacturable.” For the seventh prototype, Sanders and his team implemented principles from industrial design to address aesthetics and usability. “Then it looked better and like a real product,” he says, but it was still too expensive.

Back to the drawing board, the team turned to extrudable aluminum to lower the cost and address weight issues. The overall design was also optimized. “Until then we overbuilt everything because we were trying to figure out how to make things work,” Sanders says.

But in trimming down the thickness of the bar a quarter of an inch to reduce the device’s weight, another issue arose: the device couldn’t hold someone 300 pounds and 6 feet, 8 inches. The trimming also caused torsional problems, which occurred, Sanders learned, because the closer the bar got to being flat, the less torsionally stiff it became. Correcting those issues led to prototype nine, the final production version, with a frame made of aerospace-grade aluminum and the foot of premium carbon fiber with a rubber sole.

Just two years after the poster encounter, FlexLeg began shipping July 15 at a purchase price of $1,299 or rental rate of $75 per week.

Sanders learned a lot by trial-and-error, and his advice to others in product development is to learn a little about anything that impacts the end result including industrial design, manufacturing, intellectual property law and general business principles. “It’s not possible to be an expert in everything, but it’s helpful to understand something about every other area,” he says.

Now when he starts a design, he is already taking into consideration all of those aspects as well. “To say this is a good solution as an engineer, you are so much more valuable to other companies if you understand all the moving parts, and when you offer solutions, you have already accounted for them when you sit down in those meetings and give your design view,” he says. “You are not designing in a vacuum.”

For Further Discussion
After prototype six, the device still looked like an ‘engineering project.’ It wasn’t pretty, and it wasn’t manufacturable.Mike Sanders, FlexLeg LLC