Futurists have been predicting the demise of print-on-paper publishing for decades. Sure enough, e-readers, smart phones, and websites have transformed the habits of information consumers. Somehow, though, the dead-tree format has persisted.

New technologies such as sheet-fed inkjet presses and different types of inks are helping printers counter digital media’s advantages in terms of customization, production costs per unit, and visual impact. While there’s no stopping the advance of digital media, there is every reason to believe that print will be around for much longer than was once predicted.

Throughout the history of printing, people have overcome challenges from critics, commercial interests, and even climate to put words into type. Here is a look back at some unusual milestones that underscore humankind’s relentless drive to improve technologies for capturing the printed word.

For You: Discover the latest breakthroughs in manufacturing and design at ASME.org. 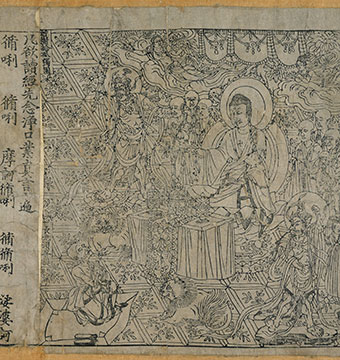 Happy 1,150th birthday to the world’s oldest dated printed book, the Diamond Sutra. Printed on a manual woodblock press in 9th century China and discovered by western archeologists in 1907, the 17.5-foot scroll has much to tell us about the early rise of printing technology. Its key claim to fame? The ancient equivalent of a copyright blurb, which dates its publication to May 11, 868, by one Wang Jie on behalf of his parents.

The text is a sacred Buddhist sermon that was first translated from Sanskrit into Chinese several hundred years earlier. Because the act of reproducing holy books was thought to bring merit and ward off evil spirits, Buddhists began honing their woodblock carving and printing skills in the 7th century. As they brought their faith to new parts of the world, woodblock printing know-how began spreading across Asia. Little is known about the history of the scroll before the year 1000, when it and thousands of other important books were hidden in a cave to protect them from an impending attack by a neighboring kingdom. The cave was rediscovered by Chinese monks around 1900. Seven years later, British archeologist Marc Aurel Stein got wind of the hidden library, bribed its protectors, and smuggled the Diamond Sutra and other texts out of China.

Whoever printed the book for Wang Jie followed a painstaking process, which began by painting the text onto sheets of paper. The manuscript was then pasted ink-side down on a wooden block to serve as a kind of stencil. The individual characters were then carved into the wood block, creating a reverse impression of the text. Seven blocks in total were carved to capture the full text of the Diamond Sutra. Each block was inked and pressed onto a piece of paper, which were then connected and rolled into a scroll. Historians believe printers could make up to 1,000 copies per day from each carved wood block.

Linotype on the Line

Hailed by Thomas Edison as the Eighth Wonder of the World, Ottmar Mergenthaler’s Linotype machine transformed the printing industry by dramatically simplifying and accelerating the laborious processes of manual typesetting and page composition.

Before the Linotype, type was composited by hand by skilled typesetters placing individual reusable letters, numerals, and spaces on a printing plate. The time-consuming process effectively limited daily newspapers to eight pages per issue, so newspaper owners eagerly backed new automation technologies that would give them more pages, and more advertising space. Appearing in 1886, the Linotype automated the process with molten metal type that was poured into reusable character-shaped molds set into place one line at a time using a specialized keyboard. The hulking Linotype reigned supreme in the world’s printing plants for decades before finally succumbing to electronic composition methods in the 1980s.

The device, however, was nearly the victim of its own promise.

Mergenthaler’s first practical model was manufactured in Baltimore from 1886 to 1888. The directors of his company limited the use of the first 100 of these machines to a small group of publishers who had invested in its development. They also prohibited Mergenthaler from making improvements to the original, problematic design. Unable to make a profit, the company nearly folded. Mergenthaler decided to quit. By 1888, after overcoming a near fatal bout of pleurisy, the relentless tinkerer developed a vastly improved Linotype design, the Model 1, and a reorganized Linotype Company would go on to dominate the printing industry for nearly a century.

In Part 2 of “Print’s Indelible Mark,” learn about the Paige Compositor, extremely cold type, and the ultra-complex Chinese typewriter.