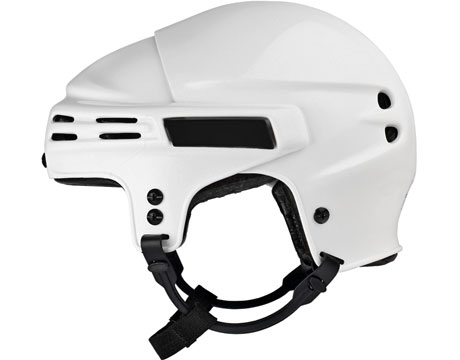 Preventing Concussions on the Ice

As a new hockey season dawns amid mounting concerns about the increase in player concussions, researchers at Virginia Tech have begun a program to test and evaluate various models of helmets for safety and durability.

The laboratory-based program will include specific ratings that players, coaches, and trainers can apply to assess the capability of certain brands to reduce the risk of concussions resulting from collisions and other head impacts.

Following up on the success of Virginia Tech’s rating program for football helmets carried out in 2011-2012, the university’s Biomedical Engineering Department will be putting popular brands of hockey helmets through a series of rigorous impact tests in an effort to quantify the protective performance of the headgear against concussions. The data collected will serve as the foundation for a numerical ratings system that assigns grades from high to low based on the predictive capability of the helmet to protect against injury.

“Part of the strategy to reduce the incidences of concussions at all levels of competitive hockey involves improvements in head protection,” said Steven Rowson, assistant professor of biomedical engineering at Virginia Tech and co-investigator on the STAR program. “The aim of our research is to identify helmets that demonstrate the strongest potential to minimize the risk of on-ice concussions.”

A sports concussion occurs when the head is accelerated during an impact, resulting in relative motion between the brain and skull and causing intracranial pressure gradients and strain responses within the brain tissue. While concussions in football garner the most public attention, in the last 10-15 years, there has been an alarming increase in the number of concussions suffered by professional, collegiate, and youth hockey players. Eighty National Hockey League players sustained concussions in the 2010-2011 season, compared to 60 in 1997-1998. Concussions have claimed players ranging from former superstar Eric Lindros, who skated for the Philadelphia Flyers in the 1980s and 1990s, to lesser-known NHL professionals who have played bit roles on teams. Six concussion-related lawsuits have been filed in U.S. courts by former NHL players, with many more expected in the near future.

Concussions in youth hockey are difficult to gauge, chiefly because reliable medical assessments generally are not performed at youth hockey games and also because peewee and high school players often neglect to report dizziness and other concussion symptoms to coaches and parents. But experts contend that many concussions do occur in youth hockey. A recent article in The Journal of Sports Engineering and Technology mentioned that a sample of 13 year-old male and female hockey players received head impacts equal in magnitude to measured values in collegiate American football players.

Rowson believes his research will improve safety. He and his colleagues have developed laboratory testing helmets that are representative of real-world head impacts. Virginia Tech will draw on research compiled at Brown University and Dartmouth College, which have instrumented ice hockey helmets to collect head impact data directly from players. In addition, Rowson and his team rented a hockey rink in Roanoke, VA, to identify differences in head impact characteristics between collisions with the sideboards, glass, and ice.

“Together, these studies inform our testing methods, enabling us to reconstruct real-world head impacts,” explains Rowson, a member of The American Society of Mechanical Engineers who has published articles on biomedical engineering in ASME journals.

In the tests, a custom-designed impact pendulum that emulates on-ice impacts strikes a head-form instrumented with accelerometers and angular rate sensors. Each helmet is put through a variety of impacts, which are distinct according to impact location (front, rear, side, and top) and impact velocity. Linear as well as rotational head acceleration are measured via high-tech sensors, and the data is collected and analyzed.

“Hockey helmets modulate energy transfer to the head during impact in a variety of configurations,” notes Rowson. “Our testing methodology enables us to map head impact exposure to specific energy levels and impact locations on the helmet.”

The researchers apply complex mathematical equations and computations in the analysis. According to Rowson, the tests will allow Virginia Tech to calculate an incidence of concussion by knowing how frequently each impact configuration is experienced by players, and the probability of injury associated with the head acceleration generated from the impact. The values will then be summated to produce an overall prediction of the number of concussions a player will experience over a full hockey season while wearing a given helmet.

While some in sports medicine dismiss the role of improved helmet designs in reducing the incidence of concussions in hockey and other competitive sports, Rowson firmly believes that new headgear can be a blueprint for less brain damage. Football helmet manufacturers, which post Virginia Tech’s ratings on their products, seem to be buying in to Rowson’s assessment. Riddell has introduced a football helmet featuring an exterior panel that can move slightly inward to absorb hits to the crown of the head, essentially dispersing the energy from the blow.

“It is a challenge for manufacturers to optimize helmet designs, because you must account for so many different impact scenarios,” said Rowson. “While we are not specifically telling manufacturers how to revise their designs, we do believe that the quest to produce a helmet that lowers head acceleration – and as a result, reduces the risk of concussion – should not be abandoned. We want to provide sporting goods manufacturers with a set of performance criteria for helmets that can be used to reduce the probability of concussion.”

For Further Discussion
It is a challenge for manufacturers to optimize helmet designs, because you must account for so many different impact scenarios. Prof. Steven Rowson, Virginia Tech University