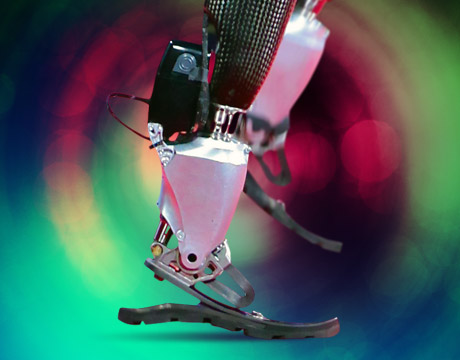 During the 2016 Paralympic Games, many runners, cyclers, and swimmers wore one or more prosthetic limbs. Because they made it look so easy, viewers may not have realized the feats of engineering that go into creating prosthetics specialized to athletic pursuit.

Tailoring a prosthetic to its wearer requires precision and skill, and that counts double when that person is engaged in climbing mountains or moving toward Olympic-level goals.

Take, for example, Hugh Herr, who has made it his life’s work to restore full and natural limb function to those who have lost limbs.

Herr is director of the Biomechatronics Group at the Massachusetts Institute of Technology, and he’s no stranger to the troubles faced by athletes with prosthetic limbs. Hugh Herr lost both legs to frostbite while rock climbing in New Hampshire’s White Mountains in 1982.

As a wearer, he soon discovered that prosthetics don’t mimic the exact human gait and they have other inaccuracies that can make them difficult to use during athletic performance or even everyday exercise like jogging, he says.

As a scientist, he’s helping to create “biohybrid” prosthetics that work in natural harmony with the humans who wear them. In the near future, wearers will control the prosthetic limbs the way most everyone controls their natural arms and legs: without a thought, he says.

Today Herr wears two prosthetic legs that help him climb with even greater facility than before the amputations. The prosthetic toes’ stiffness makes it possible to stand on the edges of small rocks, and the feet feature titanium spikes to help him climb steep ice walls.

His group has spent time analyzing the human gait to better mimic it through advanced mechanical and electrical interfaces that work in tandem with the prosthetic, he says.

Prosthetics that exactly fit will allow their wearers to climb mountains or cycle to victory, says Florian Blab, a Fraunhofer scientist working on a project that would put an end to the time-consuming and expensive fitting procedure athletes now go through to fit a prosthetic limb tailored to their needs.

Biking with a prosthetic limb is particularly challenging due to the way the knee moves as the cyclist pedals. Although there are prosthetic limbs designed specifically for cyclists, it’s not easy to find an artificial limb that works for athletes.

Usually, cyclists must have many different versions of expensive prosthetics made to find the one most suitable, like Cinderella’s slipper. Prosthetics made for cyclists are not one-size-fits-all because cyclists have different physical limitations. After the best fit is found, orthopedic technicians adjust an athlete’s prosthetic by hand, Blab says.

He and other researchers at the Fraunhofer Institute for Manufacturing Engineering and Automation IPA in Stuttgart have equipped a movement lab and built a mobile, biomechanical measuring station and developed a suitable test prosthetic. The test prosthesis is helping to quickly and precisely fit the artificial limb to the individual athlete, Blab adds.

The software model they’re creating will return information specific to the athlete. Using that information, technicians can adjust the prosthesis exactly to the cyclists, even adjusting for the perceptions and minute corrections they make as they cycle, Blab says.

Blab’s specialties at the institute: sports medicine, biophysics, and physiology, have converged on the project. He also competes in the sport of artistic cycling and has competed in the UCI Indoor Cycling World Championships, taking home a silver medal yearly in the men’s single division from 2008 to 2012.

He and other researchers on the project are at work now establishing testing parameters: the measurements that will gauge how well a prosthesis fits and how an athlete moves. With those parameters in hand, they can adjust it to precisely match the wearer’s physical characteristics, training level, and body weight.

“We can adjust the test prosthesis perfectly for each person,” Blab says. “For the first time, we’re taking the athletes’ subjective perceptions to a scientific level.”

The test subjects are cyclists at German training camp for the 2016 Paralympics held in September. The Fraunhofer lab hopes for a long-term collaboration with German Paralympic cycling team.

To find the initial parameters, an athlete with markers attached to different points on the body pedals a stationary bike in the movement lab. As they pedal, eight to twelve infrared cameras record the position of each marker to within half a millimeter. Sensors on the pedals measure the force the athlete applies to the pedals in all three spatial directions.

“This data tells us both how much force the joint exerts and how much work the muscles are doing,” Blab says.

The researchers then run the data they’ve collected through software that simulates all possible adjustments and identifies the best three or four, which the scientists test with the athlete as he or she cycles. The tests return information about precise settings for the prosthetic, including the length of the prosthesis, the position of the ball of the foot, and the point at which the sole is attached to the bike pedal, Blab says.

For Further Discussion
We can adjust the test prosthesis perfectly for each person. For the first time, we’re taking the athletes’ subjective perceptions to a scientific level.Florian Blab, Fraunhofer Manufacturing Engineering and Automation IPA