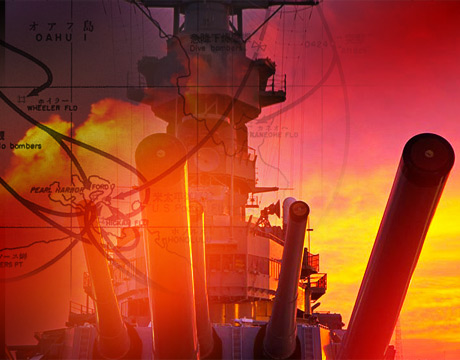 December 7, 1941. As President Franklin Roosevelt famously predicted, the passage of 74 years has not erased the infamy surrounding the date of Japan’s surprise attack on Pearl Harbor. But from an engineering standpoint, December 7 was also a vivid snapshot of extraordinary new weapons of war. Some worked spectacularly well. Others fell spectacularly short.

On that fateful morning, both sides unleashed new machines designed to control the element of surprise. Japan’s air and sea weapons were developed to slip through conventional defenses to wreak havoc at close range. For the Allies, Pearl Harbor proved a baptism by fire for nascent early-warning and code-breaking technologies that would later turn the tide of the conflict.

To preserve the crucial element of surprise, Japanese aircraft carriers set sail in November on a circuitous route chosen to avoid shipping lanes and evade U.S. planes patrolling the Pacific. As the ships drew within range of Oahu, fighter planes and dive bombers took wing to strike onshore military airbases, docks, and the 92 U.S. ships anchored vulnerably in a 45-foot-deep harbor.

Beyond its aerial bombing and strafing of ships and shore, Japan sent about 40 torpedo bombers into the harbor with a newly engineered torpedo designed to operate in Pearl Harbor’s shallow waters. Although conventional torpedoes of the time tended to run aground if fired in depths of less than 75 feet, Japan’s new finned weapons skidded past those limitations with explosive consequences.

Another shallow-harbor weapon deployed with mixed results at Pearl Harbor was the Type A Ko-huoteki “midget” submarine. Midget subs had many military uses but soon proved themselves to be effective harbor penetrators. Armed with torpedoes or mines attached to their sides or stored in their nose cones, or equipped to deliver frogmen to the scene of the action, midget subs were also useful for striking at close range. The Type A sub used at Pearl Harbor was about 73 ft. long and just shy of 10 ft in height with a 600 hp electric motor powered by 384 2-V power cells.

Only two of the five midget subs deployed in the attack made it into the harbor. One went aground, was captured, and later toured around the U.S. as a trophy to help sell war bonds. Wreckage from other midgets recovered in the intervening decades from within and nearby the harbor suggest that these diminutive submersibles scored at least a few direct torpedo hits, including one strike on the USS West Virginia verified later.

The question of how U.S. military intelligence missed advance signs of an imminent attack has persisted for 74 years. Early warning technologies like radar and cryptography were in their infancy on December 7, but would rapidly evolve in the aftermath.

Well before the infamous date of the attack, opportunities to thwart it were missed due to a lack of code-breaking know-how. The U.S. effort to train experts in cryptography and cryptanalysis was under-funded and under-resourced. Despite the chatter of coded messages during Japan’s build-up and staging of the attack, the U.S. had no suitable technology to detect and interpret the veiled clues of impending disaster.

Although British radar systems had been invaluable in coping with Germany’s aerial strikes earlier in the conflict, radar coverage in America’s Pacific islands was still a work in progress. According to the book Pearl Harbor: Final Judgement, Pearl Harbor lacked a permanent radar station at the time of the attack. However, leaders believed the five mobile radar units sited around the area were adequate to provide early warning of an attack. Radar advocates cautioned that work was still needed to ensure airborne pilots more than five miles off shore had robust communications with their officers on the ground. Additionally, even if the technology was fully up to par, it would require the coordination of both Army and Navy personnel to distinguish friendly aircraft from enemy invaders. Thus, the book states, the Japanese planes that were effectively spotted 100 miles off shore were confused with a flight of U.S. B-17 bombers scheduled to arrive around the same time and allowed to proceed.

One of the more legendary engineering impacts of Pearl Harbor was the creation of the U.S. Navy Seabees. The Naval Construction Battalions that morphed into the Seabees were formed in December 1941 under the watch of Rear Admiral Ben Moreell. Only after the attack did high command green-light the Seabees program. Members were recruited from civilian construction and engineering trades and chosen for their technical skill, more so than their physical prowess. In the all-or-nothing conflict of World War II, the Seabees gave many technically savvy middle-aged men a chance to serve in the war effort.

More than 2,300 people were killed in the Pearl Harbor attack. On December 8 and the dark days that followed, it appeared to have been a devastating victory for Japan. Within four years, however, the technological tables turned dramatically with the Allies’ atomic annihilation of Nagasaki and Hiroshima. As the catalyst for America’s entry into World War II, the lethally effective operation also is the story of warfare’s catalytic impact on technology.

For Further Discussion
As the catalyst for America’s entry into World War II, the lethally effective operation also is the story of warfare’s catalytic impact on technology.