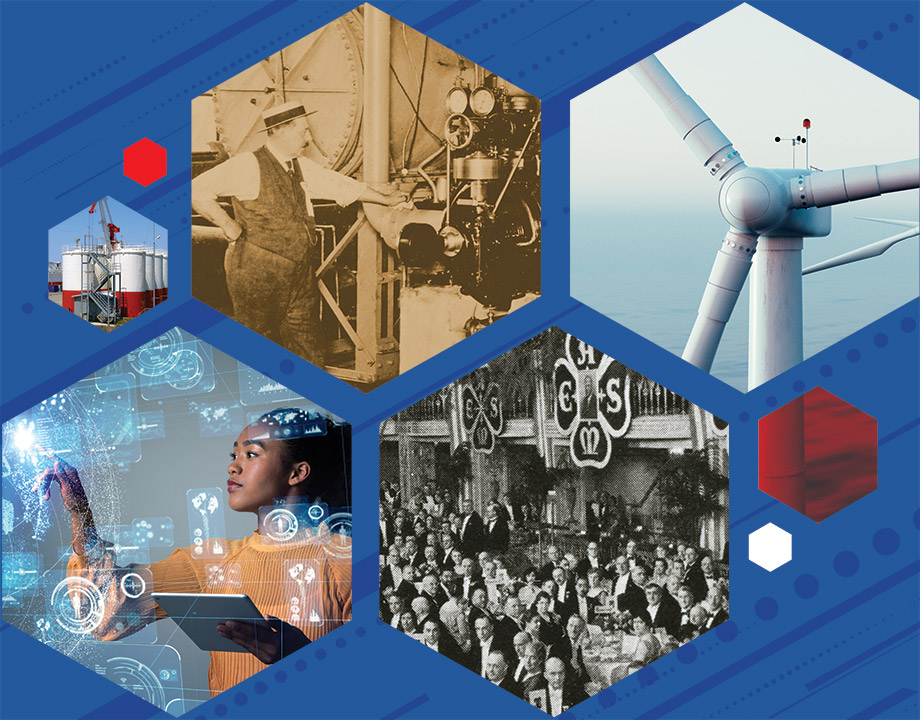 Five past presidents of ASME share their perspectives on the Society’s past, present, and its future.

One reason why I find it so gratifying to host the ASME Today & Tomorrow podcast is that it gives me an ideal platform for connecting directly with the great people who are the lifeblood of this illustrious organization. While every episode provides the opportunity to know our colleagues and their contributions to ASME better, a conversation that can genuinely be called historic comes more rarely.

Thomas Costabile: What does “ASME Yesterday” mean to you?

Nancy Fitzroy: ASME made its mark long ago when boilers were blowing up, and elevators were plummeting to the ground by establishing the codes and standards and making sure that the designs were made safe.

Sue Skemp: In addition to what Nancy said, we were able to set up an office in Washington to start addressing many of the same issues and providing a voice from engineering, specifically mechanical engineering, in developing and guiding those policies as an advisory group. It was mainly men who guided the direction of the Society. So it went from Nancy to myself, then to Vickie, and then Madiha and Charla. So we have seen progression.

Vickie Rockwell: When I first became active in ASME we focused a lot on membership and what the member needed. And that's kind of what ASME yesterday was. We had the technical part, which was very professional, but then we moved toward what we felt members would need from ASME as opposed to what they could contribute to ASME.

Recommended for You: Ten Women Engineers Leading the Way

Madiha Kotb: I think we have to be reminded that when we started, we were about public safety, and today we are still about public safety, and in the future, we are still going to be about public safety. It’s the onset of what we exist for, but we added on to it what we didn’t have before, which is the quality of life. So it's not only the safety of the products and what we offer through our standards and programs and technical conferences, we are also into improving the quality of life. That attracts a lot of people, especially the younger generation to join, because they can make a difference.

Charla Wise: As we look back on our formation and why we are about safety and the way we’ve changed over the years, I think it is positioning us for the future. It goes back to our strategy and the five technologies and the excitement that we have with the innovation with each of those and helping to drive the organization as to where we are going.

T.C: Where do you think ASME is today?

N.F: We are recognizing that we can't be a standalone Society any longer and that we have to make the transition to become much more integrated with the other engineering societies.

S.S: It is looking at that we can't be just a Society that rests on its laurels. We have to be continuously looking at the future, but also maintaining the continuity that we have today.

V.R: We are in transition, because we have many people sort of trying to pull us forward, but we really need to say, this is where we want to go, this is how we have to do it.

Further Reading: ASME Volunteers: The Pulse of the Society

M.K: We have some positive energy that’s taking us to a better place and we are exploring new horizons. I think the world is for us to conquer with our new technologies and programs. I feel that the present is good and attractive to people, and in future we will need to build more on it.

C.W: I agree with everybody about where we are. But I’m going to take an extremely optimistic view of where we’re at: We are in a period of transition. And this is a period of excitement, a period of new visions, new energy, and new leadership. I see us moving forward and frankly, quite rapidly, as you look at the vision that we’ve set forward for the Society. It’s a commitment to diversity and innovation, as well as new technologies. We’re not forgetting our basics that brought us to this point, but taking on new ways of sharing that information.

Tom Costabile is Executive Director/CEO of ASME. This column was adapted from a recent podcast. To listen to the full conversation, visit the ASME Today & Tomorrow podcast on SoundCloud, Stitcher, or iTunes.