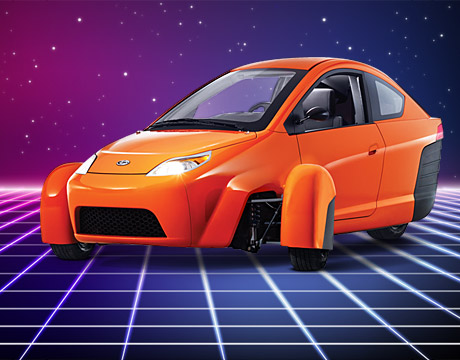 It may sound counterintuitive for a technology-driven startup to include “no new technology” as one of four carved-in-stone design principles to be followed, but that’s exactly what Paul Elio did when he founded Elio Motors.

A few years back when Elio, an engineer and automotive enthusiast, looked at the lay of the land, he vowed to come up with a highly fuel-efficient car that everyone could afford, and the company was born. That was 2008. Today, Elio Motors expects its three-wheeled, two-passenger Elio, classified as a motorcycle but designed and equipped like a car, tolaunch in the fourth quarter of 2016.

Elio started the company with four “must-haves” as part of his vision: affordability (now pegged at $6,800), high fuel efficiency (84 mpg), the highest safety ratings, and no new technology.

“We strongly believe that technical risk for a startup is a death knell,” says Hari Iyer, Elio Motors COO and a board member, because solving technical issues will take months longer than planned and be costly. Even with a commitment to “no new technology” whenever possible, funding has been one of Elio Motors’ biggest challenges.

“We do have innovation,” says Iyer, also an engineer. “It’s architectural innovation,” which he said Paul Elio likens to wheels on luggage, taking two known technologies and coming up with something different. “It’s the same thing with our vehicle.” Whenever possible, the vehicle uses proven technology.

“When you work with a large team, it is easy to lose focus of goals. Engineers being engineers, they love to do new stuff,” Iyer says. “It’s very important to harness and channel all the creative energy of engineers and go in the same direction.”

However, “It’s easier said than done to stay true to the [‘no new technology’] canon,” he admitted. Elio Motors learned the hard way. Engineers came up with the idea for a door they called a scissor door that would rotate out a little and then swing up to avoid little dings when in a tight space. Only after the engineering was completed did it become apparent that the door had a lot of complexity, meaning a greater technical risk and cost. While it solved the door ding problem, it created other issues of which the team hadn’t thought: For example, howwould the scissor door open inside a garage without hitting the garage ceiling?

“[We knew] the canons of the project vision but we couldn’t help ourselves,” Iyer says. “When you have smart engineers, that’s a natural trap of the process.”

After that, the team re-committed to the no-new-technology principle. “It was challenging to work so disciplined,” Iyer says. “We had to go through the process to completely internalize that goal. It’s not that we don’t want really cool ideas. It’s about taking technical risk and which ones have technical risk or not.”

There were many other, smaller examples, but the team figured out how to assess risk quickly, such as with a windshield wiper. One idea was to use an inexpensive, off-the-shelf water bottle and put the assembly motor for pumping the fluid on top. “In concept that sounds like a great idea, but when we did the economics, most of the cost is not in the bottle but in the motor, so being able to integrate the motor into an existing model [was not as risky and thus less costly],” Iyer says.

These issues had to be addressed because of unique aspects of the vehicle, for example, the height being the same as other vehicles but only half the width. In order for the windshield wiper to have the right coverage, it had to be the same length as a standard wiper but provide half the coverage on width. “We were able to overcome this with help from our suppliers,” Iyer says. He says major supplier-partners contribute in a big way to the “global optimum solution.” Typically, Elio and suppliers meet regularly as a team to resolve issues.

Another challenge was to find a powertrain. Trying to use as many off-the-shelf items as possible, the engineers looked at various options. But if the vehicle used an engine designed for the smallest existing car, it would be 30% less efficient on the Elio because the vehicle is half the weight of a subcompact. “Operating conditions for a lighter vehicle are different from a heavier vehicle,” Iyer explained. A decision was made that the best solution would be for powertrain systems developer IAV to design an engine specifically for the Elio.

Paul Elio’s vision also incorporated his desire to have a positive energy/environmental impact and a socioeconomic impact. “We feel we have a better green story than electric vehicles,” Iyer says. “If the Elio sells the volume we expect it to sell, it will reduce in a five-year period U.S. fuel consumption by 0.35%.It’s very fashionable to talk about electric vehicles, but at 84 miles per gallon, we are 85% of the way there, and we’re doing so at one-fifth to one-tenth of the cost of the vehicle. Which will have a bigger impact?”

As for its socioeconomic impact, Iyer says its Shreveport, LA manufacturing facility and supply base will provide 3,000 jobs and an estimated 18,000 additional jobs indirectly. “We feel good about having that kind of impact as well,” Iyer says.

For Further Discussion
We strongly believe that technical risk for a startup is a death knell.Hari Iyer COO and Board Member, Elio Motors