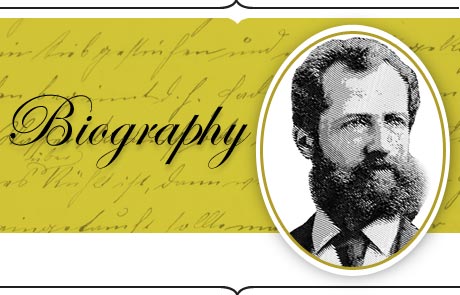 Ottmar Mergenthaler (1854 – 1899) simply and literally kept the newspaper business running for close to a century.His linotype was an improvement on the Gutenberg Press and helped make moveable type obsolete. Previously, publishing was done with manual composition through typesetting by hand, one letter at a time. Mergenthaler's was such a celebrated invention that Thomas Edison himself called it the eighth wonder of the world.

In explaining the machine, Doug Wilson, director of Linotype, The Movie, says, "It's similar to a giant typewriter that makes principal type from a pot of molten lead." Now it could print a whole line of type in one motion, cutting down significantly on printing time.

"Before it, no city had a daily newspaper more than eight pages and most towns didn't have one at all because of how hard it was to print," says Wilson. "Imagine our world of Twitter and previously you had week-old news. Mergenthaler changed all that."

Born in the German town of Hachtel, he moved to Baltimore, MD, in 1872 and started working with his uncle making patented models. James Clephane, who has been credited with helping the development of the typewriter, was a court stenographer trying to figure out a way to reproduce his notes faster. He approached Mergenthaler with an invention from Charles Moore that wasn't getting it done and asked to improve upon it. "He worked 10 to 15 years to get it right and went through many different iterations," Wilson says. "He was constantly trying to perfect it." Eventually it was cranked out first for the New York Herald Tribune. "Now the public was about to be informed in a way they never were before," Wilson says.

Wilson explains that the machine didn't make him rich, both because he wasn't a businessman but also because of the greed of others. "After he created it, a group of newspaper bigwigs similar to William Randolph Hearst bought control of the company and forced Mergenthaler out," Wilson says. "The group wanted to control it because no one else had it. Hold on to it and what chance did the competition stand? What happened was they bankrupted the company and then eventually the other investors revolted against it. When they bought back the company, they were able to bring Mergenthaler back, too."

Today Wilson says there's a small group of fans devoted to the linotype but that it lost favor in the media in the 1950s and 1960s when photographic typesetting and offset lithography came into play. But he believes Mergenthaler's legacy will always be secure.

"He in many ways was the victim of dying young and making a machine that wasn't used in every household," he says. "Everyone who read benefited from it but just didn't know who did it. There's no question that his ingeniousness put him in the conversation with the great inventors like Edison and Ford. Again, think of how important quick news is to us today. You can say it all started with Mergenthaler."

Imagine our world of Twitter and previously you had week-old news. Mergenthaler changed all that.Doug Wilson, director of Linotype: The Movie