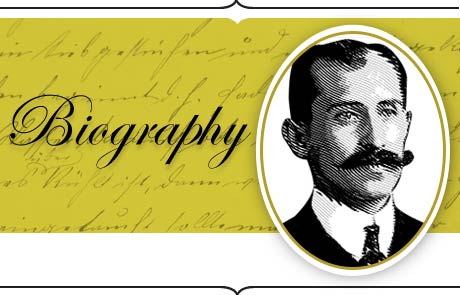 Orville Wright (1871 – 1948) was born on August 19, 1871, in Dayton, OH, and the fact that his father of was a man of God might explain his son's preoccupation with lofting mankind into the heavens. But it wasn't the celestial focus of Wright senior, who was bishop of Evangelical United Brethren Church, that inspired his son. Rather it was a miniature Penaud helicopter he brought home from one of his many travels on church business that sparked the then-7-year-old Orville's desire to take flight.

Until he figured out how, Orville contented himself with sending other objects into mid-air, including the kites he started building when the Wright family moved to Richmond, IN, in 1881. For a time, once the Wrights relocated back to Ohio, Orville even became interested in the newspaper business. It was a hobby he took up while attending Dayton Central High School, and he dropped out during his junior year to pursue it. In short order, he opened his own print shop, the centerpiece of which was a printing press he designed and built himself. In 1889, he and his brother Wilbur launched their first formal collaboration: a weekly paper, the Dayton West Side News, which Wilbur edited with Orville as publisher.

With such stores of ambition and creative ability, Orville and Wilbur, who were essentially high school dropouts, never let the lack of a formal degree hold them back. "We were lucky enough to grow up in an environment where there was always much encouragement to children to pursue intellectual interests; to investigate whatever aroused curiosity," said Orville, who, after dabbling in the newspaper business, turned his attention to bicycles. Wilbur shared this newfound interest with Orville and much of the country thanks to the invention of the safety bicycle, which had set off a national biking boom. Unlike the huge front-wheeled pennyfarthing, the bicycle that had every one pedaling up a storm had two similarly sized wheels, pneumatic tires, and a chain drive to the rear wheel, all of which improved comfort and speed. Cashing in on the craze, the brothers opened a bicycle shop in 1892, where they sold, repaired, and manufactured a bike of their own design, equipped with a self-oiling wheel hub Orville invented.

Despite their success, the Wright brothers hadn't forgotten their love of aeronautics. Spurred on by a desire to correct the design flaws responsible for the 1896 fatal glider crash of a renowned German aviator they followed, Otto Lilienthal, the brothers began to design their own flying machine. Working to build on the successes of Lilienthal's glider and the wings that Samuel Langley, secretary of the Smithsonian Institution, had used to power the series of aerodromes he built, the Wrights set about solving the problem that still confounded the day's aviation experts: how to control the aircraft.

Finding parallels to the innate control bicycle riders can exert once they learn to balance and steer, the brothers focused on how to control their airplane in the three separate axes when in midflight: yaw (right and left), pitch (up and down), and the harder-to-manage axis that was unique to airplanes: the lateral and roll. The brothers drew upon the technology used to control boats and elevators to solve the problems posed by the first two axes. But, as Tom Crouch, author of The Wright Brothers and The Invention of the Aerial Age and The Bishop's Boys: A Life of Wilbur and Orville Wright (Norton, 2003), told the story in a November 2003 Nova interview, Wilbur, idly fiddling around with an inner tube in the bike shop, yielded a discovery that gave the Wrights their idea for how to deal with the third axis:

"Wilbur realized that if you could create motion on the wings of a biplane so that the wing tip on one side was forced up while the other side was forced down, then you would have a means of controlling the airplane in lateral motion, in the roll motion. This technique—putting a twist of this sort all the way across the wings of a biplane to control its motion in roll—became known as wing warping."

The brothers applied this method first to a biplane kit, which they fitted with wings that could be mechanically twisted, then to the full-scale gliders they built in 1900 and 1901. They then continued to experiment with wing designs, which they tested in a wind tunnel they built in their bicycle shop. Finally in December 1903, they had a power model ready for testing. On December 17, in Kitty Hawk, NC, their aircraft made its maiden voyage—and the Wright brothers made history. Orville took the first flight, which lasted but 12 seconds and traveled only 120 feet, but Wilbur in a flight later that day stayed aloft 59 seconds and traveled 852 feet.

Ironically, the flights received little press coverage because the media couldn't believe the story was true. Soon, however, the Wrights won over the public, who became captivated by their feat. The U.S. government was a tougher sell; the brothers' attempts to pitch their designs to the military were unsuccessful. But undaunted, they continued refining their designs, and in July 1909, after Orville flew a demonstration sortie for the U.S. Army, they sold their first plane for $30,000. That was the beginning of a very successful aviation business, which they used, in part, to build a family manse, where the brothers planned to live with their father and sister, Katherine.

Sadly, however, Wilbur died in 1912 of typhoid fever, leaving Orville to carry on their work alone. In 1916, Orville sold the company, in order to focus exclusively on research. He joined NASA predecessor the National Advisory Committee for Aeronautics (NACA) when it was in its infancy and served as a member for 28 years. In 1930, he was awarded the first Daniel Guggenheim Medal for great achievements in aeronautics and was elected a member of the National Academy of Sciences. Orville Wright died in Dayton, Ohio, on January 30, 1948, at the age of 72.

Finding parallels to the innate control bicycle riders can exert once they learn to balance and steer, the brothers focused on how to control their airplane in the three separate axes when in midflight.

Quiz: A Look Back at Helicopters