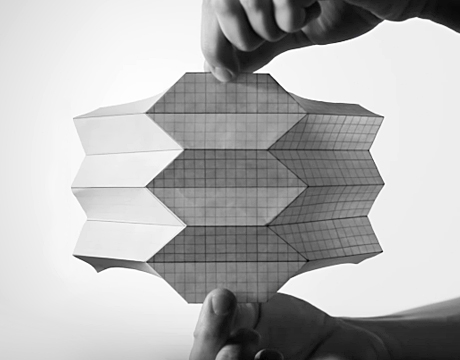 When you consider what could possibly inspire the design of a bulletproof shield to protect law enforcement, you probably wouldn’t choose origami first. Or second. Or even 102nd.

“We were working on going from origami for paper to other things,” says Larry Howell, professor of mechanical engineering and associate dean for the college of engineering and technology at Brigham Young University.“Paper creases well but you want the same properties here with origami to fold something flat and expand out. For example, doing it with solar panels. We had been discovering many ways of taking origami from paper art to engineering applications. Bulletproof material is definitely not what you would think of when it comes to origami, but we saw deployable barriers as a possibility.”

For the bulletproof material used in the shield, the team looked at choices such as canvass and fiberglass before finally deciding on Kevlar. “You can compress [the shield] down in a very compact state made of six layers of Kevlar,” he says. “It has six layers of Kevlar and then you can fold down the panels so 12 layers of Kevlar overall. Kevlar is bullet resistant but it’s actually not resistant to sunlight and water. So on the outside cover it has ballistic nylon, the same material for things like backpacks and laptop cases.”

An advantage is that it stows very compactly, he says, adding that it weighs 55 pounds in the current configuration, with the barrier being about 50 pounds and then the other hardware, such as handles, adding another five pounds. He estimates it deploys in about five seconds.

“Most shields aren’t actually even deployable,” he explains. “Most are just chunks of steel like any shield, and the few that are deployable are things you have to assemble.” The shield also has a curvature that provides some flank protection, he says.

There was a great deal of adjustment along the way, using prototypes. “We started out with paper, then went to card stock, which is rigid but still easy to work with, and then we moved to full-scale prototype with canvas and fiberglass,” he says. “That’s where we worked out a lot of bugs, and then we moved to Kevlar. We want to improve [the shield] to have different sizes. For a SWAT team you can have about three people taking cover behind this, but for an individual police officer there is value to having smaller ones. We also want to get deploying time down.”

They tested the shield with local company Action Target, going out to a local county sheriff’s shooting range, where they had law enforcement at the federal and local levels subject it to live fire, says Howell.

“We went with a 9-millimeter, a .357 Magnum, and a .44 Magnum and the shield did well,” he says. “We thought it wouldn’t work if an assault rifle was used and, when it was fired, it did go through the shield.”

Howell found the response from law enforcement to be very positive, not just in terms of the effectiveness of the shield but also the thought that went into its creation.

“They really just thanked us for caring about their safety and that means a lot,” he says. “It’s also been great to have so many students involved and most were mechanical engineers. You want to show them that what they learn has meaningful applications. Seeing what comes of it is energizing, especially when you see that it can possibly make a positive difference.”

For Further Discussion
You want to show them [students] that what they learn has meaningful applications. Seeing what comes of it is energizing. Prof. Larry Howell, Brigham Young University