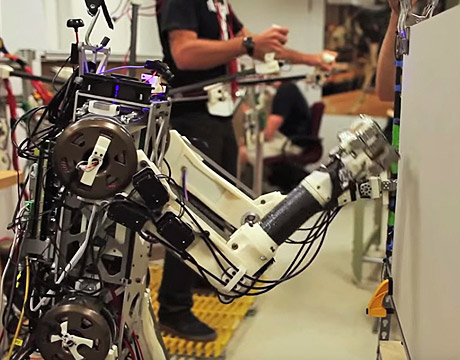 HERMES, a bipedal robot guided by a human operator, punches through drywall while keeping its balance. Image: Melanie Gonick / MIT

One with the Robot

Robots are making strides but balance isn’t exactly a strong suit. For humans, it’s a different story. What if there was a way to help our robotic buddies stay on their feet?The folks at MIT working on the roughly 100-pound HERMES robot have been asking that very question.

Albert Wang, a Ph.D. candidate working on the project, explains that the lab he’s a part of is focused on biomimicry, looking at the locomotion and the agility of animals, trying to distill the principles of how they work and put it into machines.

“We’re best known for the cheetah robot that’s highly efficient and can run really fast and jump over obstacles,” he explains. “The HERMES robot was really built as a complement to the cheetah. Where cheetah is a platform for fast locomotion, we were inspired by disaster situations, Fukushima being an obvious one. In that situation you can’t send humans because there is too much radiation. Robots could survey but a human can assess and use tools and shut valves.”

“With HERMES, you have balance feedback. Instead of just commanding a robot, the human has the sensations they have and that is felt through four sensors,” he says. “We have an upper body suit a person wears. It looks like a bunch of links and it measures the major positions of a person’s body,” he says. “Around the body are bars that hook up to a person’s belt and those provide some forces. You try to trigger reflex responses. The idea is any time you get a feeling, you can respond quickly with the whole body instead of seeing numbers moving that requires more processing. It’s not as quick as what you feel or as intuitive.”

For software, they use common development platforms, according to Wang. “But pretty much all the code that runs on top is custom,” he says. “Our particular problem is how do we send tons of motion data and distribute to the joints in the robot quickly. Then send that sensation of feedback back quickly to the person so they can respond and we capture what they’re doing and send back to the robot. You want quick communication, mapping, and translation.”

Their motors look different than a traditional robot’s, he says. “Wide radius motors that are a bit flatter than most people are used to seeing,” Wang explains. “Because they’re so large, they don’t need so much gearing. That greatly simplifies the design. Without all these gears and mechanisms, it’s not a lot of moving parts. Inertia is quite small. We can be very efficient about the torque we’re generating so we don’t require much energy to generate the force we need.”

Wang says HERMES could have many potential uses, from telepresence capabilities for doing work from remote locations, to helping older people. “To both ‘physically’ be there through the robot and use your own human senses, it’s interesting to think about what it could lead to,” he says. “Humans and robots have been working together but this is a different way.”

For Further Discussion
To both ‘physically’ be there through the robot and use your own human senses, it’s interesting to think about what it could lead to.Albert Wang, Ph.D. candidate, MIT