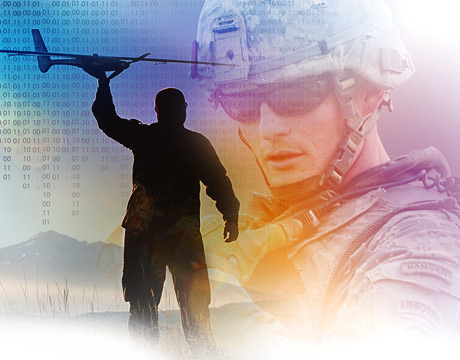 Imagine this scenario: A military reconnaissance patrol has an immediate, previously unforeseen need for support from a small unmanned aerial vehicle (UAV). A soldier transmits the patrol’s specific requirements to a fabrication lab where a technician uses U.S. Army Research Laboratory (ARL) software to configure a system made of both off-the-shelf and custom parts. Within 24 hours, the UAV is built and available to the unit to be deployed.

Not long ago, such a notion would have been characterized as classic science fiction. But today, researchers at the ARL, the Army’s “corporate” laboratory that provides critical links between the scientific and military communities, envision delivering a customized UAV that can be deployed within 24 hours, thanks to additive manufacturing.

The idea of such a project will be scrutinized by soldiers at the 2017 Army Expeditionary Warrior Experiments (AEWE), an annual event held at Fort Benning, where technologies under development get early feedback from potential end users. ARL had been doing mission modeling and vehicle modeling as part of its micro autonomous systems research program in collaboration with Georgia Tech's Aerospace Systems Design Lab. Researchers felt it was time to incorporate 3D printing into the mix, says John Gerdes, a mechanical research engineer within ARL’s Research Laboratory Vehicle Research Directorate. “Additive manufacturing has become so ubiquitous now, and we expect the Army, like industry and academia, will be adopting it all over the place.”

ARL’s project is one of 50 technologies accepted to participate at the next AEWE, 14 from government researchers and 36 from industry. “At a top level we would hypothesize that such an ability would provide an advantage,” says Eric Spero, aerospace research engineer and team lead on the project, but researchers hope to delve deeper into the specific tactical advantages of additive manufacturing for UAVs on demand before proceeding.

“It’s a good opportunity for us at the research lab to anchor our research goals of scientific ideas into a practical reality that soldiers operate in,” Gerdes says.

In a white paper Spero wrote to apply for AEWE participation, he noted that small UAVs can be a useful unmanned teammate in several ways, such as investigating weapons of mass destruction at a safe stand-off distance, looking beyond gaps, collecting forensic data and breaching complex obstacles, for example, those that require hover-flight capability.

Meanwhile, ARL is continuing to research technical aspects. Spero notes that the size of vehicle they envision is similar to those now used mainly by hobbyists and do-it-yourselfers. “There is a lot of research needed to see how size relates to performance and how that relates to quantified measures such as indirect range and payload carrying ability,” he adds.

One of the biggest engineering challenges, says Nathan Beals, aerospace research engineer and another team member, is being able to accurately predict the performance of the vehicle so that when in soldiers’ hands, it performs exactly the way they expect.

Ideally, with the tool Beals is developing, a vehicle design will be created and sent to a 3D printer and all the parts will be manufactured in parallel so that one or more vehicles can be created in a single print job. Thus far, the tool can generate a vehicle design considering mission requirements and the inventory of parts available at the location, send it to a printer, and build the structure. With it, ARL has built a medium-sized quadcopter as a demonstrator. The structure, including the hub and arms, took about 10 hours to print, and was then assembled by a technician with all the electronics in fewer than two hours and was ready to fly.

A fourth team member, Raymond Wildman, materials research engineer from the weapons and materials research directorate of ARL, is focusing on topology optimization to design the structure. “Optimal design is important when you have weird, crazy requirements for parts,” Gerdes says.

“And mass is a very important factor for a rotorcraft,” Wildman adds, noting, “The way topology optimization works is it takes [all information into consideration] and comes up with the optimal way to place the mass to support the load. One of the main issues in the past is that [this computational design method] tends to generate complicated designs. If we were to use traditional manufacturing methods, it would be difficult to make these things without special considerations.”

As the team gathers more information, they are thinking even further ahead. “We are very imaginative in the research lab,” says Gerdes. “There are technologies under development here that are looking into things like embedding the electronics inside the printed plastic [structure]. Once you start to combine the functions of 3D printed parts into a single merged part you are multi-functionalizing things on the vehicle. That is getting closer to the biological approach. That’s a major reason why animals are so good at what they do because there is never a part on the animal that does just a single thing. The quadcopters we are building have a battery and a structural part and a motor and each do “a” thing, and nothing else so [ideally] we would like to 3D print things that have merged functions.”

For Further Discussion
Additive manufacturing has become so ubiquitous now, and we expect the Army like industry and academia will be adopting it all over the place. John Gerdes, U.S. Army’s Research Laboratory Vehicle Research Directorate