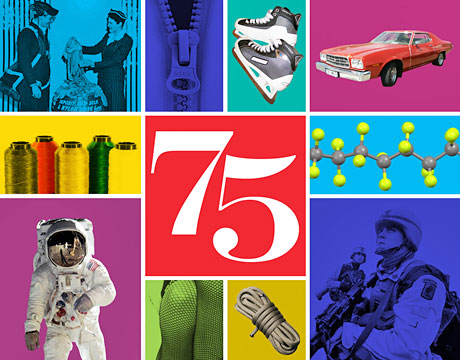 It’s won wars and fueled riots. In between it’s become an ubiquitous material for a host of engineering applications. Happy 75th birthday to nylon, the world’s first totally synthetic engineered fiber. DuPont began mass producing nylon in 1939, after more than a decade of research and development in the uncharted territory of polymer chemistry and engineering. Wallace Hume Carothers’ feat had social consequences that continue to ripple through modern life.

Due to both its antiquity and its ubiquity, it’s easy to take nylon for granted today. But the material is still holding its own among newer advanced thermoplastics. Take the fast-moving world of 3-D printing, for example. Stratasys (Eden Prairie, MN) markets a nylon-12 material for fused deposition modeling (FDM) applications on its Fortus production systems, reporting performance improvements of 100% to 300% better elongation at break, better fatigue resistance, superior impact strength, and top Z-axis lamination than other thermoplastics for FDM. Taulman 3D (St. Louis, MO) focuses on the material in its line of resins specified, among other applications, for a wide range of medical and prosthetic uses. Clinical tests of 3D printed bone and cartilage using Taulman’s medical grade nylon resins could lead to the ability for rapid, customized replacement of broken bones and other injuries that would otherwise require multiple surgeries.

But modern interest in nylon pales in comparison to the mania it inspired 75 years ago.

In the 1930s, people still relied mainly on materials made from the same plant- or animal-derived fibers that had been in use for centuries. Silk, hemp, cotton, cellulose, linen, wool, and stiff animal hair were the materials of choice for everything from toothbrushes to fishing line to underwear. Like all natural products, they were prone to breakage, decay, and bacteria. Early partial synthetics like Bakelite and rayon provided novel alternatives but only inspired companies like DuPont to keep looking for better, totally engineered synthetic fibers.

DuPont hired Carothers, a Harvard chemist, in 1928 to lead the search at the company’s recently established Experimental Station in Delaware. Modeled after the early legendary industrial laboratories at Bell Telephone and General Electric, DuPont’s new facility was built for pure research to produce new knowledge of fundamental concepts, which was a revolutionary new role for science in the industrial setting. Carothers spent years studying the mysterious process of polymerization – the linking of multiple monomers into repeating chains to form macromolecules. The unique molecular structure of experimental polymers lend materials unusual physical properties suggesting potential industrial use – but no one knew why, let alone how to control the polymerization process in a manufacturing environment.

Carothers’ work led first to a synthetic rubber replacement, neoprene. By 1935, his team had identified a group of polyamide compounds that could be produced as a strong fiber that tolerated heat and solvents. Meanwhile, DuPont had already identified a key end market for such a textile fiber: women’s hosiery. By the time scientists had landed on the formula for nylon as we now know it, DuPont was ready to introduce the revolutionary nylon stocking to an eager American public.

Nylon reportedly started out as Nuron – at least according to an account attributed to former DuPont Nylon Division Manager Ernest Gladding. Underscoring the market value of a fiber that would provide women of the era with a durable, easier-to-care-for alternative to silk stockings, the name nuron is also the backward spelling of “no run” – the primary claim to fame of nylon stockings. Although the name was discarded for other reasons, it influenced the final choice. Interestingly, DuPont never registered the word nylon as a trademark, hoping instead that it would become the popular generic – which it did.

American women were introduced to nylons at the 1938 World’s Fair in New York. Mass production started the next year, and retailers began selling them in 1940 to immediate success. At least for a year or so.

Winning a War, Losing a Battle

Even before the U.S. formally entered World War II, souring trade relations with Asian suppliers of silk and rubber threatened U.S. supplies, spurring an intensive scientific effort to find domestic sources or manmade replacements for these critical materials. The increasing industrial build-up put tight restrictions on the use of wood or metal for anything other than defense purposes. Nylon’s introduction was perfectly timed. When U.S. airborne forces landed at Normandy on D-Day, they got there by nylon power. The parachutes and glider tow ropes that got the first airborne troops into action were nylon. On the ground, nylon was found in soldiers’ tents, outerwear, mosquito netting, and medical supplies, and in the valves, cams, gears, tires, and ball bearings powering the machines of war. With traditional sources of many of these materials off limits, U.S.-made nylon and other new polymers played a critical role in the war’s outcome.

After the hostilities, however, the laws of nylon supply and demand were anything but peaceful. Non-military uses of nylon had been banned during the war, but DuPont immediately resumed production of women’s stockings afterward. The first supplies hit stores in late 1945. DuPont’s initial supply, however, fell dramatically short of the pent-up demand. Mobs of shoppers turned out to buy the coveted items, only to find empty shelves. The frustration boiled over into fights, vandalism, and bogus accusations of a publicity stunt by DuPont. For the ensuing year it took to ramp up production, “Nylon Riots” raged in cities from San Francisco to New York.

It’s impossible to know what nylon’s inventor, Wallace Carothers, would have made of the uproar. He died tragically well before the nylon stocking’s original debut. Despite his scientific success and recent marriage, the brilliant chemist struggled with depression and ultimately committed suicide in 1937. Fittingly, his final act in life was to mix his lethal dose of cyanide with lemon juice, a chemical synthesis he knew would accelerate his death.

For Further Discussion
When U.S. airborne forces landed at Normandy on D-Day, they got there by nylon power.