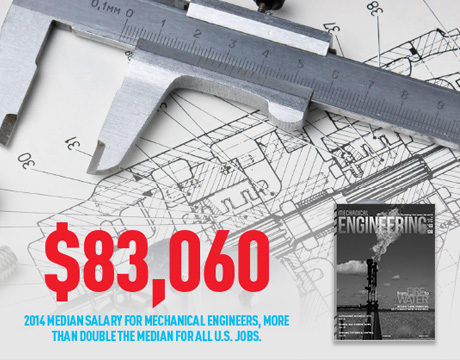 By the Numbers – Who Hires the ME’s?

A forecast from the Department of Labor shows mechanical engineering employment holding its own through 2024—growing a little more than engineering jobs overall and only a bit more slowly than overall job growth in the United States.

The most significant growth is predicted in the area of professional, scientific, and technical services as companies continue to contract work. This category of employment had 87,000 jobs in 2014 representing 31.5 percent of the ME profession. The BLS forecasts a 16.8 percent increase to 102,100 jobs in 2024, accounting for 35 percent of jobs.

Within that category, jobs identified specifically as “mechanical engineering services” are expected to grow almost 23 percent to 65,000 in 2024 and to constitute more than 22 percent of total ME employment.

The agency also predicts a 13 percent increase to 288,600 jobs in mining, quarrying, and oil and gas extraction.

Mechanical engineering jobs in other fields are also expected to show double-digit increases, although from smaller bases. The BLS predicts employment in construction, for example, will grow almost 14 percent from 3,700 to 4,200 jobs.

Manufacturing is still expected to be the leading employer of mechanical engineers in 2024, when it may account for 46.2 percent of the profession, but overall the field is expected to show a small decline. Manufacturing companies employed almost half the MEs working in the U.S. in 2014, some 136,800 people. The BLS expects U.S. manufacturers to employ 134,900 mechanical engineers in 2024, 1.4 percent fewer than in 2014.