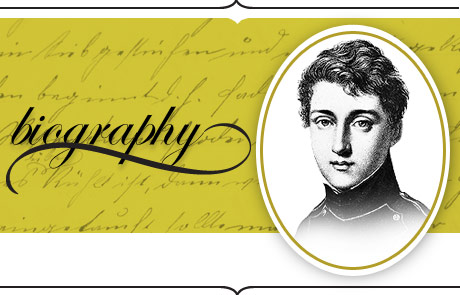 Nicolas Léonard Sadi Carnot, the son of high-ranking military leader Lazare Nicholas Marguerite Carnot, was born in Paris in 1796. His father resigned from the army in 1807 to educate Nicolas and his brother Hippolyte—both received a broad, home-based education that included science, art, language, and music.

In 1812, the 16-year-old Nicolas Carnot was admitted to the highly esteemed École Polytechnique in Paris. His instructors included Joseph Louis Gay-Lussac, Siméon Denis Poisson, and André-Marie Ampère; fellow students included famous future scientists Claude-Louis Navier, and Gaspard-Gustave Coriolis. During his time in school, Carnot developed a special interest in the theory of gases and solving industrial engineering problems. After graduation, Carnot entered the French Army as a military engineer and served until 1814. In 1821, he visited his father, who had moved to Magdeburg, Germany. Lazare had seen a steam engine that had come to the city and father and son spent much of their time together discussing theories about how steam engines worked.

Carnot returned to Paris, excited to develop scientific theories about steam engines and heat; no researchers had yet discovered the fundamental scientific principles behind their operation. Most scientists believed in caloric theory, which maintained heat was an invisible liquid that flowed when it was out of balance. Carnot wanted to use his research to improve the efficiency of steam engines, which was only a meager 3% at the time.

Carnot had two key questions about heat engines he wanted to answer: Was the work available from a heat source unlimited? And can the efficiency of heat engines be improved by replacing steam with a different fluid or gas?

In 1824, Carnot published Reflections on the Motive Power of Fire, which detailed his research and presented a well-reasoned theoretical treatment for the perfect (but unattainable) heat engine, now known as the Carnot cycle. In the first stage of his model, the piston moves downward while the engine absorbs heat from a source and gas begins to expand. In the second stage, as the piston continues to move downward, the heat is removed; the gas still expands but this time through a temperature drop. In the third stage, the piston starts to rise and the gas is compressed again, driving off heat (isothermal compression). In the fourth stage, the piston continues to move upward, the cooled gas is compressed, and the temperature rises.

Carnot realized that the conduction of heat between parts of the engine at different temperatures had to be eliminated to maximize efficiency. He also introduced the concept of reversibility, whereby motive power can be used to produce the temperature difference in the engine. Also some of the theories he determined laid the groundwork for the discovery of the second law of thermodynamics.

Carnot died during a cholera epidemic that swept Paris in 1832, at the age of 36. Fearing they were contaminated, many of his writings were buried with him at his funeral—very little was saved. Unfortunately he did not live to see his work revered by other scientists. His ideas were incorporated into the thermodynamic theories proposed by Rudolf Clausius and William Thomson in the early 1850s. Rudolf Diesel also drew on Carnot's theories when he designed the diesel engine in 1893.

With his multiple scientific contributions, including the Carnot heat engine, Carnot theorem, and Carnot efficiency, Nicolas Léonard Sadi Carnot is often described as the "Father of Thermodynamics." His concept of the idealized heat engine led to the development of a thermodynamic system that could be quantified, a key success that enabled many of the future discoveries that lay ahead.

With his multiple scientific contributions… Nicolas Léonard Sadi Carnot is often described as the “Father of Thermodynamics.”