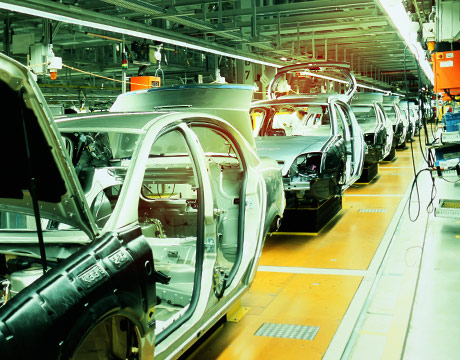 Connecting the pieces, whether it be for a bridge, boiler or small-scale medical device, is perhaps the most basic part of the manufacturing and construction process, and welding is one of the primary methods to do so. But the advent of lighter, high-strength metals used, for example, in automotive manufacturing has made the welder’s job more difficult because high heat and re-solidification can weaken the material along the bond. Now, Ohio State University materials science professor Glenn Daehn and his team believe they’ve devised a solution that joins the new materials without melting.

Their system is called vaporized foil actuator welding (VFA), and works using a high-voltage capacitor bank to produce a very short electrical pulse within a thin piece of aluminum foil. The foil vaporizes within microseconds and the resulting hot gas pushes pieces of metal together at very high speed, joining them without melting. The bond is produced by impact so there is not a seam of weakened metal that is the result of melting.

Daehn says his lab works on “mostly developing new processes based on ‘what does the world need?’ Now there is a problem with joining new materials,” and he says VFA can help solve the problem, especially in automotive manufacturing.

“One of the biggest potential applications is in auto body construction,” he says. “Manufacturers use hot stamped steels with remarkable high strength. There are aluminum alloys is door panels. Joining aluminum to steel and aluminum to aluminum are outstanding problems.”

Daehn developed the process in his Impulse Manufacturing Laboratory within Ohio State’s Department of Material Sciences and Engineering. VFA tests there have successfully welded aluminum with steel and other metals using collision velocities ranging from 200 meters per second to one kilometer per second.

“This is not the way commercial welding looks,” he says. “But we join at full strength and join a very wide variety of materials. And we use much less energy, ten percent to twenty percent of the energy used in fusion spot welding process.”

Daehn believes VFA will offer a better alternative to resistance spot welding, where a high electrical current passes through pieces of metal. The metal’s natural electrical resistance creates heat, melts and forms a weld. But the weld loses strength and the process is very energy intensive.

Daehn has been working with impulse metal forming for about 20 years. “There’s a few different ways of doing things but they all have issues,” he says. He began working with VFA seriously about four years ago. “It’s kind of been known that if you run a pulse current through wire it will vaporize. But it hasn’t been used in manufacturing.”

The process utilizes a thin metal conductor. When electrical current stored in the capacitor bank is released, the conductor is heated above its energy of sublimation before it has time to melt, according to the lab. The metal conductor vaporizes directly into a gas and quickly expands. The pressure pulse from the expanding gas drives the weld, joining the two pieces of metal at the atomic level. Seen under a microscope, the bond is illustrated by curls where the veins of the materials loop and wrap around each other.

Daehn has patents on the technique, but acknowledges even though it holds promise for commercialization, it is not yet mature enough to draw much interest from industry. “It’s always difficult to find funding for this kind of work,” he says. “The culture within manufacturing companies is very conservative.”

So far, the work has been largely funded through grants from the Alcoa Foundation, the U.S. Dept. of Energy and the National Science Foundation. It is one of the first projects to receive support from I-Corps@Ohio, a state program based on NSF’s I-Corps commercialization program.

Because the work is so new, he also points to the immediate need of establishing standards and certification for the technique. “We’re trying to build up much of that infrastructure,” Daehn says. “We see a vision that this technique should join other mainstream techniques.”

Daehn, who has worked with the auto industry for over 20 years, says the quest to make cars lighter and stronger puts pressure on connections. There are other techniques for joining, including fasteners, which the Ford Motor Co. uses in the manufacture of the all-aluminum F-150 truck. “That’s not the way they really would like to join,” he says. “It is not efficient. You can also use resistance spot welding, but with aluminum it is difficult.”

Daehn says his team has demonstrated that the VFA technique is two to three times stronger with aluminum than resistance spot welding, the technique they use to benchmark against. As they further the process, he looks to escalate its potential by developing equipment that can make multiple welds, scaling the tooling to demonstrate its robustness.

VFA also can be fitted to robots for potential work on manufacturing line. “We can use our technique and put it on the end of a robot,” he says. “We can come up with the equipment to make several thousand welds. This holds a lot of promise.”

One of the biggest potential applications is in auto body construction. Manufacturers use hot stamped steels with remarkable high strength. Joining aluminum to steel and aluminum to aluminum are outstanding problems.Prof. Glenn Daehn, The Ohio State University