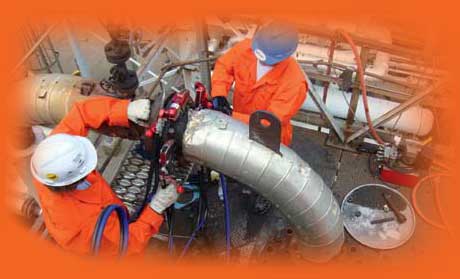 Torquing a flange: Advances in technology, procedures, and calculation methods have been incorporated in the 2010 edition of Guidelines for Pressure Boundary Bolted Joint Assembly.

Since PCC-1’s original release concern arose over incidents of bolted joint leakage, some involving personnel injury, that could have been avoided with relatively minor changes to assembly procedures. PCC-1-2010 incorporates new recommendations based on this experience. For example in section 13.0 “Joint Pressure and Tightness Testing,” a caution was added on the use of temporary gaskets used during pressure and tightness testing. The revision also recommends that gaskets not be reused.

Section 7.0, “Lubrication of Working Surfaces,” was updated to include a recommendation that bolts be checked for free-running nuts during bolt lubrication. This was based on experience indicating that relatively small imperfections on the bolt or nut thread can significantly affect the obtained bolt load when tightening the joint.

Filling in the Knowledge Gaps

Previous guidelines for flange face flatness were based on manufacturing tolerances and often did not reflect what practical experience. Nor did they address imperfections in the flange facing. In practice, the acceptable imperfections for a flange facing depend on the type of gasket.

Appendix D, “Guidelines for Allowable Gasket Contact Surface Flatness and Defect Depth,” describe flatness limits based on compression the gasket experiences during assembly. The appendix also covers acceptable levels of local flange facing imperfections, which depend on the materials used.

PCC-1 was updated to improve joint assembly productivity by allowing graphite to remain in the flange surface finish grooves after cleaning when using graphite-faced gaskets. This reduces the effort associated with preparing the joint for reassembly.

Since the initial release of PCC-1, considerable effort was made to demonstrate that faster assembly methods can achieve joint integrity equal to or better than those obtainable through older methods. The theory behind these improvements is the use of an appropriate pattern for the gasket being employed and by increasing the bolt load at a much more rapid rate than the legacy method. Pattern passes employing multiple tools have been included to reflect this common industry practice.

The lack of standardized qualifications for bolted joint assemblers has been identified as an issue by many in industry and is a leading cause of joint leakage due to poor assembly practices.

To improve the status quo, a significant revision to the existing PCC-1 Appendix A was drafted and is under consideration. The proposed new Appendix A outlines requirements for creation and administration of training and assessment programs for certifying bolted joint assemblers, and suggests minimum course content for that certification.

ASME PCC-1-2010 represents a step change in the level of detail provided for guidance on bolted joint assembly and guide continued improvement in the integrity of bolted flanged joints.

The lack of standardized qualifications for bolted joint assemblers has been identified as an issue by many in industry and is a leading cause of joint leakage due to poor assembly practices. Article
Combining Parts Simplifies Assembly
As products get smaller and more complex, with challenging geometries and assemblies, there is more interest in combining multiple parts into a single part. This simplifies assembly and also improves production efficiency.

Article
Infographic: The Growth of Additive Manufacturing in Aerospace

Additive Manufacturing Collection
Companies like Boeing and Airbus, use additive manufacturing for several applications including prototyping and end-use production parts.