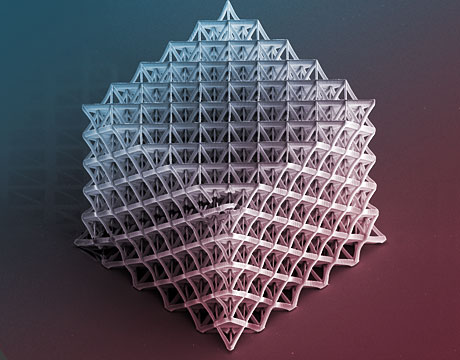 Light as a feather and tough as steel. Those are the two properties of the ideal material, and they don’t usually come together. Ceramics, be they new or ancient, are typically strong and light, but always brittle: their tendency to shatter has long kept them out of the category of “ideal.”

But now, thanks to researchers at the California Institute of Technology, the world’s oldest malleable material is now the strongest, lightest stuff on the planet. And, oddly, it’s flexible to boot. There will be no more chipped urns for the antiquarians of the future.

The trick is to construct the material on the nano level. To do that, Julia R. Greer, a professor of materials science andmechanics at the university, used a technique called two-photon lithography. In essence, a laser works its way through a liquid polymer, slowly hardening it nanometer by nanometer. Once this initial structure has been fully written, a nano ribbon of aluminum oxide (a ceramic) is wrapped onto the exterior. Then the polymer on the interior is etched away, leaving nothing but a ceramic lattice, made of tubes a micron in diameter. And the walls of those tubes are a mere 10 nanometers thin.

Paradoxically, it’s the extreme thinness that gives the material its strength. “It enables you to get as close to an ideal as possible,” says Greer. Usually, when force is applied to a material, it fractures wherever there are flaws. But with the precision that comes fromGreer’s method, the ceramic lattice is nearly flawless, so buckling occurs well before any fracture. When compressed by nearly 50 percent, the structure was still able to pop back to its original shape. A similar structure, with a wall thickness of 50 microns, shattered. And metals built to the same specs were nowhere near as strong.

The lightness has as much to do with the material as with the structure, which is more air than matter. “You can no longer look at the effect of the structure only, or material only,” says Greer. “Now you have to look at them together.”

The potential applications for the strongest, lightest material—which happens to be flexible—are, of course, many. Airborne uses, where weight is crucial, abound. The skin of airplanes, for instance, might be one of the first places the material might be put to use. Balloons could be made to float without adding a gas. Just a minimal vacuum at the opening and the entire balloon would become lighter than air.

Batteries could be made worlds lighter. Tiny biomimicking devices could use the ceramic scaffolding. And, as ceramics make excellent thermal buffers, the thinnest of ceramic sheets could be used anywhere two temperatures need to be kept from each other.

One could also, conceivably, print out lightweight, tear-proof, damage-proof sheets. Stack a few of those together (well, more than a few) and you’ve got a seemingly impossible construction unit. “It feels like a brick, it’s as strong as a brick, if you drop it will never shatter. Lighter than a feather and damage proof,” says Greer of the potential future. “Basically, we’ve completely changed the world.”

Before that change can be put to use, Greer and her colleagues need to find a faster way to process the ceramic. The two-photo lithography is an excruciatingly slow process. Though it can accurately create complex structures, each featuremust be written into the polymer. “To scale something up, it would have to be new technology,” says Greer.

Once that technology is worked up and disseminated we’ll be living in a lighter, stronger, more clay-like world.

For Further Discussion
It feels like a brick, it’s as strong as a brick, if you drop it will never shatter.Prof. Julia R. Greer, California Institute of Technology