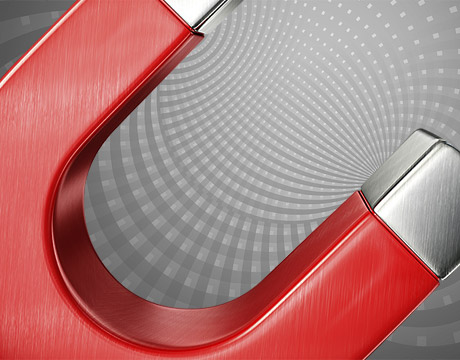 It’s not every day someone makes a discovery that changes a scientific principle that has been accepted for 175 years. But that is exactly what Harsh Deep Chopra, professor and chair of mechanical engineering at Temple University, and Manfred Wuttig, professor of materials science and engineering at University of Maryland, have done.

Their discovery of a new class of magnets defies a long-held scientific principle that iron-based magnetic materials changed their shape, but not their volume, when placed in a magnetic field. Instead, the new magnets show a large volume change, “swelling up like puffer fish,” says Chopra. "Our findings fundamentally change the way we think about a certain type of magnetism that has been in place since 1841."

That was when physicist James Prescott Joule discovered that iron-based magnetic materials elongate and constrict anisotropically, but do not change their volume, when placed in a magnetic field—a phenomenon called “Joule magnetostriction.” Since its discovery 175 years ago, all magnets have adhered to this principle of volume conservation.

Chopra and Wuttig discovered that when they thermally treated certain Fe-Ga, Fe-Al, and Fe-Ge alloysto approximately 760 degrees Celsius for 30 minutes, then rapidly cooled them to room temperature, the materials exhibited marked non-Joulian behavior by expanding in volume.

"The response of these magnets differs fundamentally from what Joule likely envisioned,” comments Wuttig. "He must have thought that all magnets respond in a uniform fashion."

Non-Joulian magnets also generate negligible amounts of wasteful heat during energy harvesting. This transformative breakthrough has the potential to not only displace existing technologies, but create new applications due to the unusual combination of magnetic properties.

For example, one area of application lies in the development of compact and efficient magnetic actuators with little thermal signature of waste heat. Conventional magnets can be used as an actuator to exert a force and open a valve, for example—but they only operate in one direction, since all magnets are limited by Joule magnetostriction. Actuation in two directions under the Joule paradigm requires bulky stacks of magnets, which are inefficient and preclude significant miniaturization. “However,” indicates Chopra, “non-Joulian magnets can expand in all directions when an external magnetic field is applied, which should make it possible to construct energy-efficient and compact omnidirectional actuators for mechanical devices and microelectromechanical systems.”

Because these new magnets have such energy efficient characteristics, they will likely be used to develop advanced sensors, energy harvesting devices, compact micro-actuators for aerospace, automobile, biomedical, space and robotics applications, and ultra-low thermal signature actuators for sonars and defense applications. Another important point regarding is that these iron-based alloys do not include expensive rare-earth elements—by replacing existing rare-earth based magnetostriction alloys, the new magnets could provide more robust performance at far less cost.

Since reporting the non-Joulian magnetism, Chopra and Wuttig have discovered similar behavior in a large group of magnetic materials that also apparently conform to the non-Joulian concept. “We are now working to develop this new class of magnets and establish the scientific origins of this behavior so that they may be applied to develop new alloys,” says Chopra. “My lab is also exploring new forms of actuators, devices, and energy harvesting systems to bring these materials to their full potential.” Since these magnets can expand in all directions, it immediately creates entirely new applications that were not previously thought possible using conventional magnetic actuators. These could range from compact, energy-efficient omnidirectional actuators and energy harvesting materials to robotic “muscles.”

Chopra is still somewhat amazed at discovering a new physical principle that counters what has been accepted knowledge for 175 years.

“I learned that in order to 'see' nature, I had to shed preconceived notions of how things work,” he says. “That is always the hardest part, because often one tends to fit and process new information into an existing knowledge base, even in face of those inconvenient, pesky facts that don't fit nicely into existing understanding. Itis encouraging and heartening that while old principles will hold, new ones are out there to be discovered.”

For Further Discussion
Our findings fundamentally change the way we think about a certain type of magnetism that has been in place since 1841.Prof. Harsh Deep Chopra, Temple University