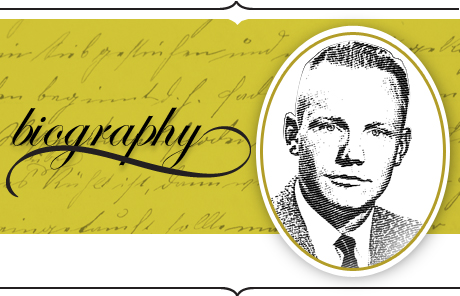 Neil Armstrong was not the flashiest of the Apollo astronauts. He could appear rather stiff in public appearances, and colleagues like Chuck Yeager said his flying style lacked natural feel – it was "too technical." He may have even muffed his big line before a worldwide audience of half a billion people.

Armstrong's small-town roots and squeaky clean Eagle Scout demeanor contributed to the "Only in America" mythos of Apollo 11's pioneering journey to the moon in 1969. His history-making moonwalk was the ideal tonic for the world at the height of the stressed-out sixties. But who needs pizzazz when you've just pulled off the most flamboyant technological achievement of the 20th century, and possibly of all time? Armstrong was above all an engineer, with an inborn ability to make the sensational achievable.

Armstrong was born in 1930 in Wapakoneta, OH, to Stephen and Viola Armstrong. His father worked as an auditor for the state of Ohio. Armstrong developed an early interest in aviation, experiencing his first airplane flight at age 6. He began pilot training at 15, and was a licensed pilot before he could legally drive a car.

Determined to fly for a living, Armstrong began aeronautical engineering studies at Purdue University under the Holloway Plan, which sandwiched a free four-year college education around a three-year commitment to the U.S. Navy. Beginning active duty in 1949, he served during the Korean conflict, flying 78 combat missions and earning three medals.

After Korea, he returned to complete a bachelor's degree in aeronautical engineering at Purdue, graduating in 1955. His resume was just what the government was looking for when building its first team of space explorers. NASA's predecessor, the National Advisory Committee on Aeronautics (NACA), hired him as an engineer and test pilot. At Edwards Air Force Base in California, he tested more than 50 different aircraft including chase planes, bombers, and the X-15 rocket plane, which he took above 207,000 feet at Mach 5.74 speeds. While at Edwards, he finished his master's degree in aerospace engineering at the University of Southern California.

Many colleagues admired Armstrong's technical proficiency with aircraft, owed in part to his engineering training. Others, notably famous non-engineer hotshots Chuck Yeager and Pete Knight, complained that his piloting lacked a natural "feel." Armstrong's involvement in several high-profile near-miss incidents as a test pilot did nothing to convince his critics that an engineer belonged in the cockpit.

NASA tapped Armstrong for its astronaut program in 1962. In 1966, he commanded the Gemini 8 mission, becoming the first person to dock two orbiting spacecraft. His star was rising.

Two random twists of fate made Armstrong the first man to walk on the moon.

He was originally assigned to command the back-up crew for the Apollo 9 mission. However, he was called into action sooner to serve a similar back-up role on Apollo 8. Based on NASA's system of astronaut rotation, that change positioned him to command Apollo 11 – the mission to land on the moon.

Buzz Aldrin was originally assigned to take the first historic steps on the moon. However, based on the seating arrangements in the Lunar Module, Aldrin would have had to climb awkwardly over Armstrong to exit the craft first. Simple logistics made it Armstrong's "one small step" that achieved a giant leap for mankind.(Another version of the story suggests the order came from NASA higher-ups who felt it would be more appropriate for Armstrong to have the honor as mission commander).

Debate lingers about Armstrong's iconic statement upon stepping on to the moon's surface: "That's one small step for man, one giant leap for mankind." Reporters and spectators alike were wowed by the quote, but were scratching their heads at the same time. It should have, of course, been a "small step for a man," but no one heard him say the a. Did he misspeak this eternal line, or did static make his statement inaudible? Armstrong has said he intended to say it, and that he hopes future scribes will insert a parenthetical "a" in the proper place.

Apparently such earthly controversies pale in contrast to the awe of viewing our home planet from the moon. "It suddenly struck me that that tiny pea, pretty and blue, was the Earth. I put up my thumb and shut one eye, and my thumb blotted out the planet Earth. I didn't feel like a giant. I felt very, very small," he said.

Back on Earth, Armstrong worked briefly for NASA and the Defense Advanced Research Projects Agency before moving into academia, teaching aerospace engineering and conducting research at the University of Cincinnati until 1979. Today he still lives in Ohio with his second wife, Carol.

He has served on boards of directors of companies in the transportation, energy, broadcasting, and aerospace industries. He lent his expertise to investigative panels studying two space accidents, the 1970 investigation of the Apollo 13 explosion and the 1986 Rogers Commission investigation of the Space Shuttle Challenger disaster.

Although he has done some limited work as a spokesman for American companies such as Chrysler, he guards his public image closely and has stopped signing autographs to thwart attempts to resell them for profit. He has even sued his long-time barber for the unauthorized sale of his hair clippings.

Although his public statements are rare, he continues to advocate for U.S. space exploration, including manned missions to Mars. "I suspect that even though the various questions are difficult and many, they are not as difficult and many as those we faced when we started the Apollo [space program] in 1961," he said.

Mystery creates wonder and wonder is the basis of man's desire to understand.Neil Armstrong