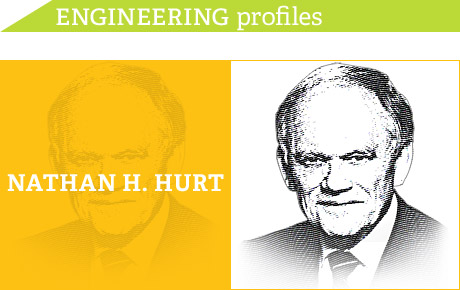 Nathan Hurt grew up during the age when teenagers were modifying cars into hot rods, and he was right there among them. That hands-on experience modifying engines and carburetors, shaving heads down, and changing muffler and spring support systems got him interested in doing more mechanical work. After initially working toward becoming a journeyman machinist, Hurt enlisted in the Navy, where his mechanical background was put to use in the back engine room of a destroyer.

He earned his bachelor's degree in mechanical engineering after leaving the Navy, and a job offer from the Goodyear Tire and Rubber Co. ledHurt on a 64-year career path devoted to managing the design, construction, and operation of chemical and nuclear facilities. Forty-seven of those years have been dedicated to the nuclear field.

He is recognized by ASME with Honorary Membership for significant contributions in the nuclear industry, particularly the field of uranium enrichment, and in the broader mechanical engineering profession as an active member and distinguished past president of ASME.

Hurt began his career at Goodyear in 1947. During his 40 years with the company, he was involved in the construction and operation of plants for the production of polyvinyls, polyesters, rubber chemicals, and synthetic rubber. He held several engineering and plant management positions, and served as program director for the design, construction, and training of operating management for a synthetic rubber plant in Brazil for Petrobras, the Brazilian government-owned petroleum company. He also was assigned to programs in France and Luxembourg.

When Goodyear formed a subsidiary, Goodyear Atomic Corp., to fulfill a contract with the U.S. Atomic Energy Commission for the operation of a new uranium enrichment facility,Hurt was manager of engineering during the facility design and construction. Later he was deputy general manager and, subsequently, Goodyear Atomic's president and general manager.

After retiring from Goodyear in 1987, Hurt joined the Denver office of Los Alamos Technical Associates as director of marketing and projects. His responsibilities included managing an office in Oak Ridge, Tenn., and projects at several other U.S. Department of Energy nuclear sites. He later joined IDM Environmental Corp.'s Oak Ridge office as vice president, Southeast region, and was responsible for the decontamination and demolition of facility projects at several DOE sites.

Now a senior consultant, Hurt currently provides consulting services on uranium enrichment and radioactive cleanup to companies with DOE contracts. he also co-authored the chapter on uranium enrichment that was published in the Nuclear Engineering Handbook edited by Kenneth D. Kok (CRC Press, 2009).

An ASME Fellow, Hurt has been a member of ASME since 1946. Initially a member of a Student Section, he went on to serve as chair of the Management Division (1981), vice president of the General Engineering Group (1984-88), member of the Board of Governors (1988-90), and ASME president (1991-92). During his year of presidency, he promoted the awareness of contributions of engineers to society and stressed the importance of precollege preparation for entering the profession. Hurt continues to serve on the Committee of Past Presidents as well as the Committee on Organization and Rules and the Energy Committee. He received a Dedicated Service Award in 1994.

He also is a Fellow of the Institution of Engineers, Australia, and a member of the American Nuclear Society and the American Society for Engineering Management. Hurt earned his bachelor's degree in mechanical engineering at the University of Colorado, Boulder, in 1947.

After initially working toward becoming a journeyman machinist, Hurt enlisted in the Navy, where his mechanical background was put to use in the back engine room of a destroyer.